Tour of The Grand Palace in Bangkok, Thailand 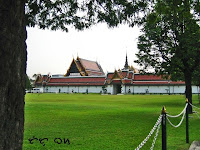 On our last day in the bustling capital of Thailand, I took my friends to the sprawling Grand Palace complex which once served as official residence of the Thai's beloved king. The complex is surrounded by a defensive wall and stands on the shores of the Chao Phraya river (much like Malacanang Palace is on Manila's Pasig River)

Here you can see how popular Thailand is due to the sheer number of tourists visitng this place dwarfing the Philippines' tourism figures by a very large margin. 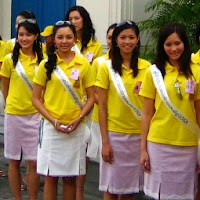 At the entrance of the compound, we saw a group of Thai beauties waiting to enter the compound for some sort of a pictorial. I noticed that here in Thailand, they now also equate beauty to having fair complexion (familiar, heh?) 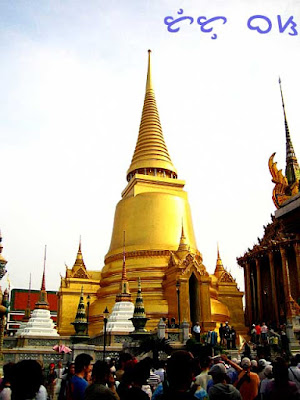 The Phra Sri Ratana chedi. A chedi, called stupa in India and dagoba in Sri Lanka, is a Buddhist dome-like monument built supposedly to cover Buddha's relics after his death. Note that in India, the Great King Ashoka, on his conversion to Buddhism, ordered building many stupas and chakri 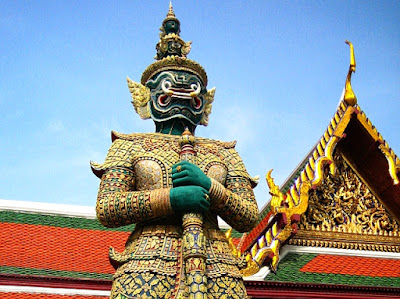 a mythological creature called a yak, measuring five meters, guarding the entrance of the palace. Notice also the Thai elaborate designs and finials 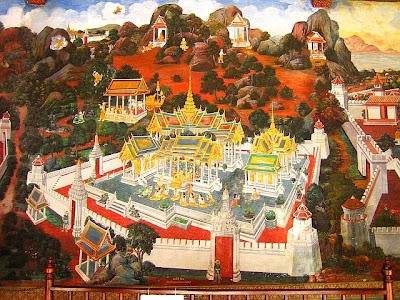 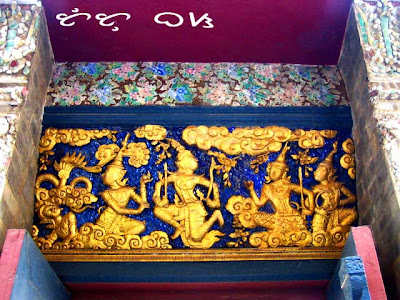 Scene from Ramakian, the Thai version of Ramayana 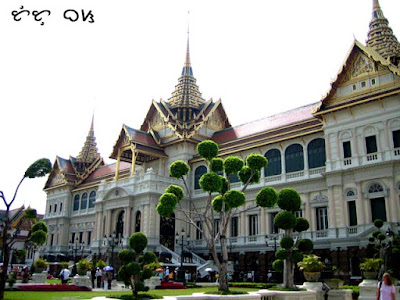 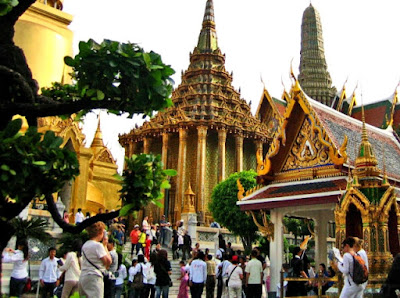 Wat Phra Kaew housing the most important icon for the Thai people-- the Emerald Buddha. The Temple also houses a model of Angkor Wat since the Thai and Cambodian people share a common cultural and religious roots. It is forbidden to take pictures inside the temples of the Emerald Buddha

Didn't you notice that the complex is overrun by tourists? I found it hard to take pictures without people in it unless I intentionally included people to add scale 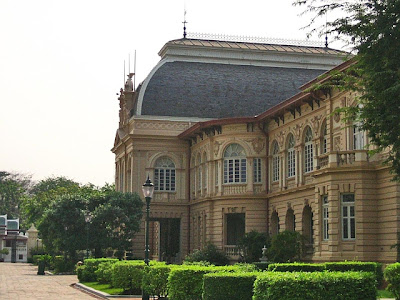 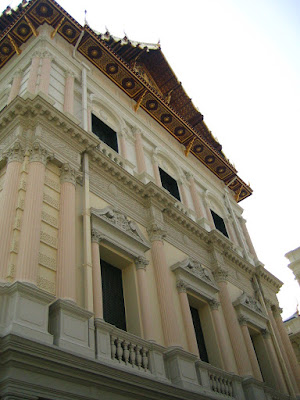 Bangkok, centered on the Grand Palace, was made the capital of Siam, Thailand's old name, when rampaging Burmese sacked their old capital Ayuthaya. The temporary capital then was Thonburi opposite Bangkok on the Chao Phraya.

The Grand Palace complex is a must-see in Bangkok and requires at least half a day to fully explore the place. Tickets are priced at 200 baht (thai money). Wear appropriate attire when going there i.e. no shorts, sandals, sandos. Open everyday from 8:30am to 3:30pm. Also avoid scums pretending to be tuktuk (three wheel vehicles) drivers telling you the complex is closed and suggesting other places to take you)

you don't need to memorize it; just say Bangkok! :)

Thailand has so much more to offer, eh. I'm sure there are Filipinos who have been to Thailand many times more than they've been to, say, Bohol or Vigan.

But is it true that all those temples were built precisely to attrack more tourists? i.e. that they're "fake" tourist attractions? i.e. not really antique?

i. love. bangkok. but not for the shopping. been to the grand palace din. did youalso ride the boat on the chao phraya river? feeling ko kung malinis ang mga estero sa maynila, we could do the same thing. =)

wish upon a star. when's my turn to see bangkok? wonderful travel post. sure you had fun.

that does sound familiar? hehe

Bangkok has the longest name, eh? Wonder if that's just a gimmick. ;-)

aaay, one day i too would like to see bankok.
thanks for taking me through your
nice pictures.

i have been to bangkok last year, and i'd have to say that the tour of the grand palace was one of the highlights of my travel..=) i love the details of every structure and the wall murals.. i have to agree with what tutubi said about the number of tourists.. i didnt mind having a lot of tourists around. in fact i found it safer that a lot of foreigners were there, since i understand what they're saying..=P it would be hard to get stuck in a place where you dont know the language at all (napa-paranoid ako sa mga scams haha)