Though Tutubi's been to Mumbai (Bombay), India in 2004 (chronicled here, here and here, he found the presence of many Indians who've made Singapore their home, much like in Malaysia (also noticed this in February 2004 visit to Kuala Lumpur), intriguing and exciting. Compared to the Philippines who has a small population of Indians, Singapore has a bustling presence of Indians who add unique color to the cosmopolitan Singapura.

Located at 244 South Bridge Road in Chinatown is the oldest Hindu temple in Singapore: Sri Mariamman Temple. Dedicated to the Mariamman, a mother goddess worshipped for protection against diseases, the temple was founded in 1827 by Narayana Pillay, eight years after Stamford Raffles arrived in Singapore. 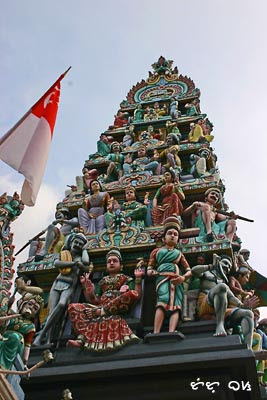 the exquisite gopuram of the temple 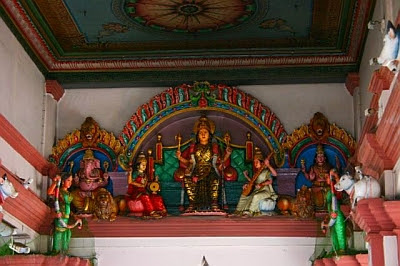 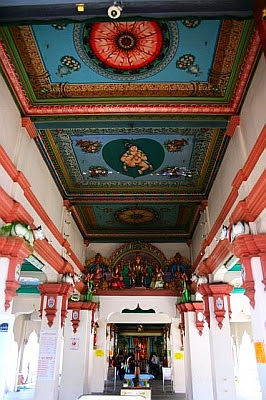 It's here at Sri Mariamman where the annual fire-walking ceremony is held, a week before Diwali (Deepavali), the Festival of Lights (symbolizes the victory of good over evil)

One of the easily recognizeable icons of Hinduism, is the elephant-headed deity Ganesha (Ganesh), also known as Vinayaka (the prominent leader), the god of wisdom, literature and worldly success. 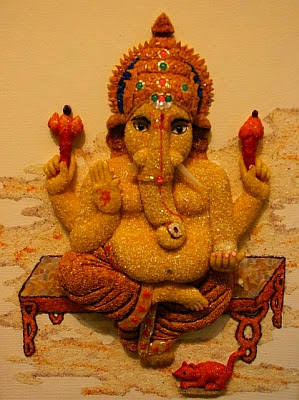 an artwork of Ganesha at a certain jewelry shop. noticed the rat here? the rat is said to be his vehicle

Ganesha is said to be the son of Parvati and Shiva. Tasked to guard his mother and one time failed to recognize Shiva himself; tried to defend his mother's bath, Ganesha was beheaded by Shiva who later was persuaded by Parvati to resurrect him.

He promised Ganesha that he should have the head of the first creature to appear. An elephant, said to be the wisest of animals, appeared and became the involuntary donor in the first successful head transplant :)

on the gastronomic side, numerous Indian stores cater to Indian minority and tourists alike.

Being the cosmopolitan Tutubi, at one instance, ordered Tandoori chicken, Roti Prata and washed down with lassi 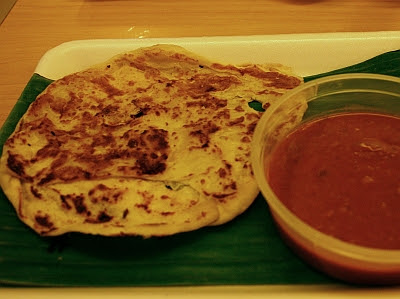 Roti Prata, similar to Malaysia's roti canai, is a Singaporean Indian pancake-like food served with curry sauce. (Tutubi first encountered this dish at a restaurant called Penang in Podium, Ortigas Center years ago. Penang is no longer there, if Tutubi recalls correctly) 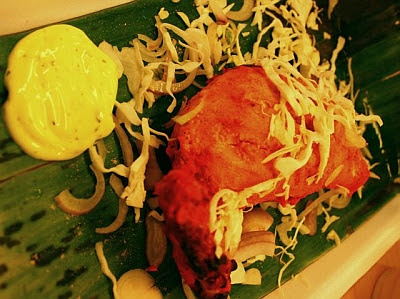 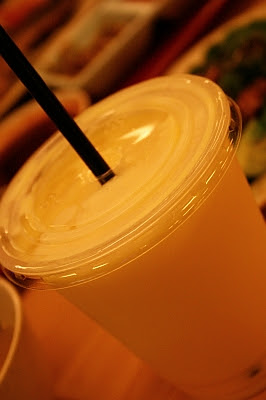 First tasted by Tutubi in Mumbai and became one of his favorites, lassi is a frothy drink made from yogurt, water, salt and spices.

These three are just samplers of the most accessible food from exotic India available in Singapore.

Indian cuisine and culture is deeply embedded in Singapore, add to that contributions of the Chinese, Malay and other races, creating a truly uniquely Singapore experience!

Hankering for Indian Food in Manila? Drop me a comment, and I'll send you some suggestions from pricey to affordable :)

Ah, salamat po, for sharing about the Indian community in Singapore.

is Iranian food different from Indian? Kasi we have a boss from Iran, and there was a time when we would buy beef and pita bread and tandoori.

I've tried some Indian food here and their good. I've had tika chicken with naan bread and right now the thought is making me hungry. LOL

Thanks for sharing your travel experience with us.

it looks delicious to me. But i haven't tried any indian food.

the photographs are stunning!
the hindu influence in our culture is worth exploring. in our own language, we have words that are of hindu in origin i.e. guro or guru.

there's bollywood (pricey ) in makati, lots of indian restaurants (and a sikh temple) on UN avenue (where a small indian community is) in Manila, an indian store near Sacred Heart in Makati, and also a nice canteen on Estrella also in Makati (near pasong tamo)

watson, many similarities with persian and indian in way of cooking and use of yogurt in tandoori chicken and kebab/kabab

WIB, in Indonesia is something like West Indonesian Standard Time. It's Bahasa language (Waktu Indonesia Barat). Note that Indonesia, being a large country, is divided into 3 time zones. Now, I hope that clears your mind :)

lazarus, sure is delicious, most pinoys however don't like curry

cheh, it has something to do with FIlipinos not marketing ourselves and our food well. i've an upcming rant of the state of philippine tourism :(

datupanot, yes many words even maybe the origin of Filipino language :)

hi tutubi!
my first time in your blogsite and found it very interesting.. =)

would like to share, Indians are everywhere.. here in Qatar, i think at least 40% of the population is of Indian origin, about 25% are filipinos and the rest, others.. =)
i'm sure to visit ur blogsite often.

oops, i forgot to leave my name for u..
the last comment is from

I agree madami na talaga ang indian sa Singapore, there is a place there which was named "Little India". I've been to Singapore but I was not able to visit "Little India"

mattscradle, i'm aware of little india but was not able to visit it due to lack of time. next time i will