It's a national holiday again thanks to the new "national hero"!

Majority of pinoys really stayed at home glued to the boob tube just to watch their idol beat up another Mexican.

Traffic in the metro was very smooth and crime free for at least a few hours.

ABS-CBN really made a killing profiting from commercial overload due to the slightly delayed telecast of the bout on free tv. Would you imagine it was over when they were still showing Jaca's bout? Too many people lost interest upon hearing the news on the radio and ANC and also got bored with the endless barrage of commercials. This aside from the hype of making it look really like a championship bout aside from the Philippines vs Mexico headline.

Another thing, they imported Michael Buffer, of the "Let's get ready to rumble" fame, further padding the expensive ticket prices. IMHO, I prefer a pinoy doing that but inventing a new battlecry instead of that rumble cliche. We might have made it popular and known to the whole world aside from saving dollars.

btw, I got this image of the new P5 bill circulating on the net: 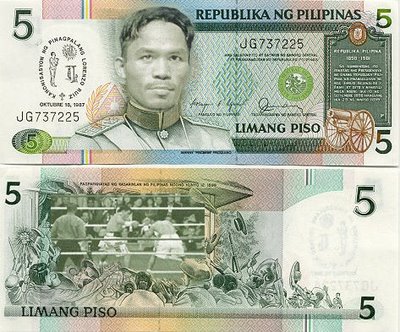 I don't consider Manny a hero like most Filipinos do. He's just a boxer of humble beginnings earning lots of money so spare me the crap that he's really worthy of veneration if not adulation. He deserves to be be honored for the feat but nothing else beyond that.

I was also actually awaiting results of the World Cup where Filipinos should really get into-- Planet Football!

I really have to agree with you – The World Cup is the most watch sports tournament in the whole world and how sad that the Philippines is not even a part of it … Many Filipinos I think don’t even appreciate the World Cup but ask them about boxing and basketball they know a lot about it – wala naman tayong mararating sa basketball eh, ang liliit kaya ng Pinoy ;-)