The Carving Capital of the Philippines annualy hold an ice carving contest on the 24th of July which is the day before the town fiesta.

over at the town plaza ICE AGE is beginning

to form this one by joining several blocks

if you think those kibitzers were marvelling at the ice creations, you got it wrong. What they're really after were bottles of Emperador brandy already ice cold :)

three of the few I managed to photograph 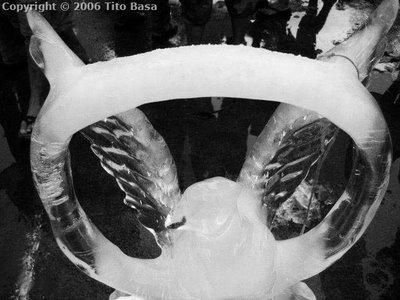 Global warming doomsdayers must be telling the truth since just a few minutes when the gates were opened to the public to see the ice creations up close, they vanished rapidly. Not that they melted-- they ended up in mugs of on-lookers rooting for free ice!

Pictures taken with Canon Ixus 30, Photoshop used to blur background (something you can't do with a P&S camera but fairly easy on SLR). Black and white conversion using filters.

went to Sin City in the US for a year but came back to Manila Diamond Hotel. He resigned afterwards, out of work for a while but now employed in a local hotel :)

Nice photos Tito, my first time to drop by here. Didn't know they have ice carving in Paete:) - ajay/annalyn.net

hi, i am desperate to find an ice carving for my wedding reception, pls email: nicejaus@yahoo.com
janice