What began as a query about Manila Bay sunset cruise changed into visits of local orchidariums then morphed into stories of butterflies and tutubi (dragonflies) over at Explore Philippines yahoogroups featuring the usually incoherent tutubi (that's me) when JB announced the presence of a rare tonbo (Japanese for dragonfly) thriving on the mystic slopes of Mt. Banahaw that moneyed Nihon-jins willingly cough up easily a thousand dollars each.

Knowing that a writing workshop was earlier conducted at Kinabuhayan Cafe that JB co-owned, I opened the idea of conducting a photojournalism workshop for me to finally visit his place, trek the enchanting streams and forests of Mt Banahaw and the seminar itself akin to a 3-point shot in the game most Filipinos love.

It was intended to be just a joke, with a hidden power of suggestion, and surprisingly JB Nalang obliged and later admitted that it was the key that let loose his inhibition to again plug-in his Kinabuhayan Cafe to other Explore Philippines yahoogroups members to visit his place.

The Photojournalism workshop began to take shape with Ocs Alvarez of Summit Media invited to impart his gift to us newbies armed with "super kitlens-powered" DSLR cameras. Planning started last week of May, re-scheduled many times (i've lost count how many times it was) and finally finalized (redundant huh?) to be held on the fourth weekend of July.

Kinabuhayan, after reading so much about you, the flightless tutubi is finally arriving with large aperture eyes.

At the Glorietta, right on appointed time not so typical of Filipinos, Derrick, Joselle, Carrie with hyperactive son JM, Jing, Joan, Jessica, and the flightless tutubi met JB, his wife and daughter Isabella, Ocs and his wife Bel. We drove off to Dolores town in Quezon province encountering jinx early on with the blueboys of the MMDA but was ironed out after a brief "diplomatic stand-off."

Arriving at Kinabuhayan Cafe after less than two hours, the sight of a unique house designed by Jay Herrera, a familiar name on TV sometime ago, greeted us. Made up of bits and pieces of ordinary turned exraordinary components, it is by itself a work of art, transforming common everyday materials into artful why-didn't-i-think-of-that conversation starters. A pool table shares center stage with 3 tables for guests. Tiles demarcated by bamboo slats make up the floor and artworks adorn the walls including the windows.

Three open-air Nipa huts with country-style hammocks with loft plus a unique toilet with hot shower that gives a rainforest shower sort of feeling due to presence of plants and flowers. A white mosquito net completes the setup upon snooze time.

A tree house perched on a sampaloc tree stands at a corner while plants, flowers, and trees abound giving the impression that the place just grew out of a forest. 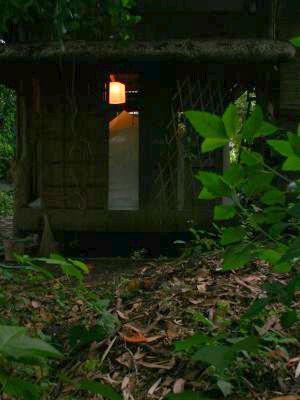 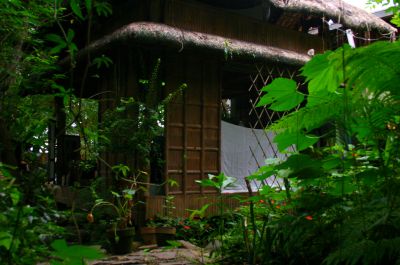 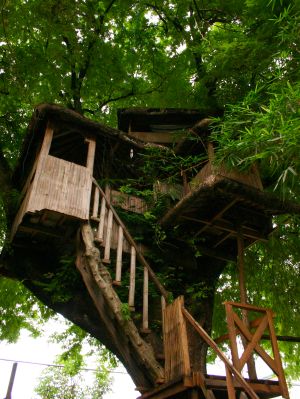 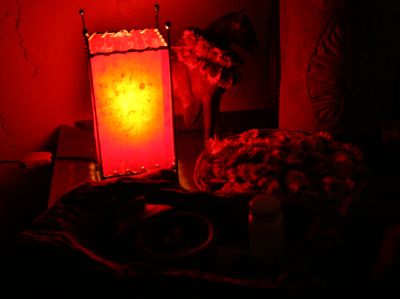 the toilet equipped with hot shower in a garden setting 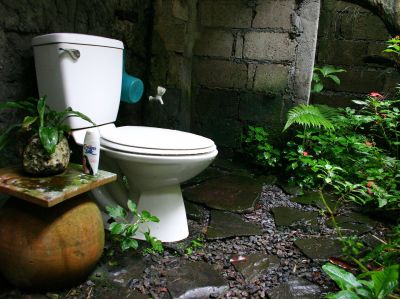 everywhere you look lies a work of art 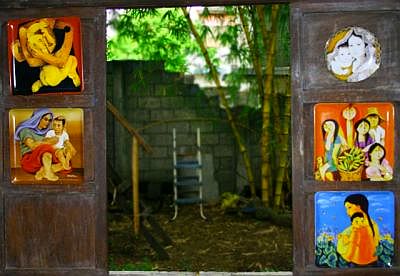 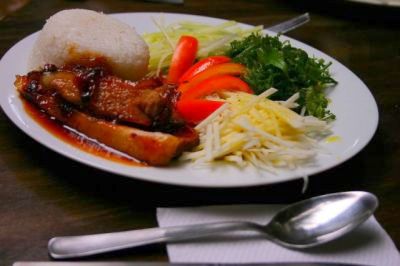 Arroz a la Cubana for breakfast downed with kapeng barako 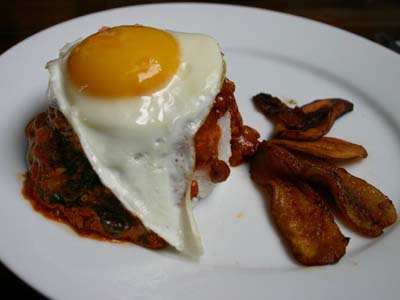 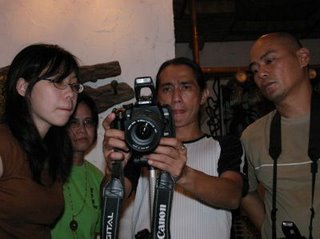 Ocs Alvarez of Summit Media with JB, Joan and Carrie. 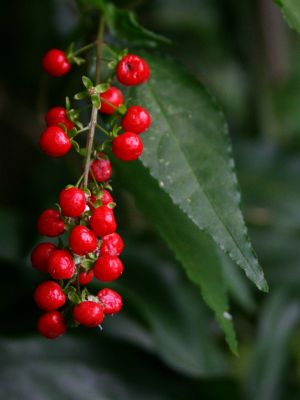 very nice alternative place eh? i was there when it was still half-finished

Thanks for the write-up, titobi! Can't wait for the second chapter. :)

r.o., Kinabuhayan Cafe Bed&Breakfast will never be finished; we keep growing and evolving, much like nature does. I hope you come back and visit us again. We'll give you the easy trek.

got that right, JB!

i thought of telling Resty that the place is really evolving.

Is the wild berry edible? It grows in most places, my curiosity growing wild with that berries.

Is the wild berry edible? It grows in most places, my curiosity growing wild with that berries.