part of the Kinabuhayan Cafe package and photography seminar is a light trek to Mt Banahaw's green slopes, streams, and caves. A short jeepney ride to the jump off point will pass by numerous churches and shrines by groups (avoid to call them cults for political correctness) believing in the mysticism of the mountain. 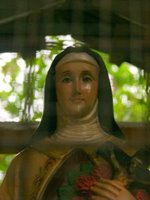 First stop is Dolores where more than a hundred concrete steps that i didn't bother to count leading down to a stream below but along the way you'll encounter an image of Sta Lucia where you're requested to light a candle and say a short prayer.

Another icon you'll see hundred steps further down before we reached the end of the steps where images of the Holy Family and of Mary and a genuflected child (shown below) perched on a large rock against a backdrop of mystic mountain's lush foliage including ferns. 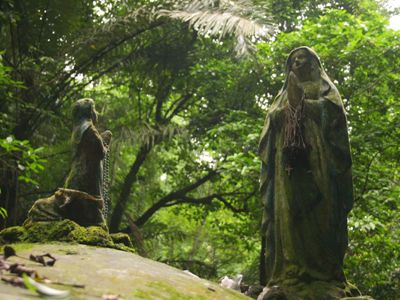 the stream and small waterfalls below (the truth is i expected a larger falls than the one I saw so a bit disappointed, that's what you get for such "great expectations"). I also don't like concrete steps on mountains for I prefer unspoiled and pristine off the beaten track places but that's just me. 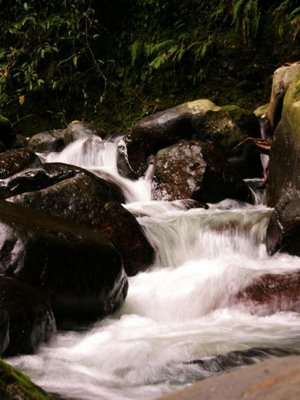 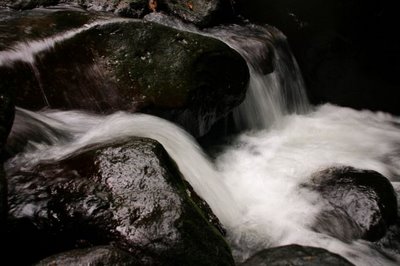 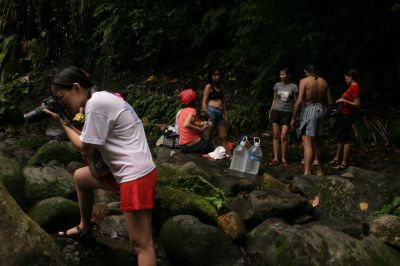 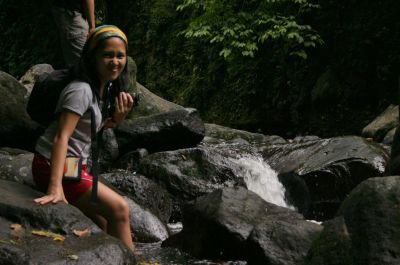 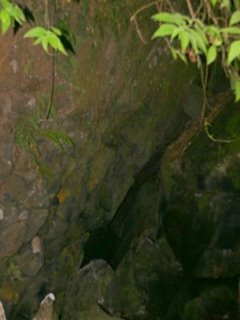 which is a small cave with an opening suited for horizontally-challenged or non-claustrophobic individuals. Inside the cave is a cramped chamber and pool of water where people take a refreshing dip seven times that locals believe would wash away their sins (not that i believe such claims but i respect them and not say a word). It was probably named Jacob's well due to the presence of a ladder in the pool akin to Jacob's ladder in the Bible. Anyway, i should've dipped much more than seven times since it's really refreshing and more efficacious than Dr Wong's and Dr Kaufmann's sulphur soap!
(picture shown lacks scale since i forgot to include people but the cave entrance can really make "healthy" people squirm and wiggle through the narrow crevices of the cave)

the trail back to the jeep again we saw stalls selling various talismans, amulets with the all familiar eye enclosed by an equilateral triangle symbol, souvenirs, food including sweet bukayo, and things that looked like stalactites and stalagmites blasted from the caves by unscrupulous individuals looking for quick cash to the detriment of the environment that they should be looking after.

Mt Banahaw is a nice place to visit and re-visit (and re-visit) and perhaps because i wasn't able to see and take pictures of my enigmatic namesake, the tutubi, that JB informed me of. Maybe next time.