Clearing immigration at the Mumbai airport was a breeze and we’re later ushered into our waiting car to be transported to our hotel. I forgot the name of that decrepit hotel we first checked into but the following day we transferred to the cozier Taj Lands End hotel in upscale Bandra district of Mumbai where mansions with high walls were said to be owned by Bollywood stars.

Speaking of Bollywood, I never got to see their stars not even their studios also located in Mumbai but wathng TV where so many films were shown. Indian movie industry, called Bollywood, churns out more films than their American counterpart. Virtually all their movies have song and dance numbers and having a plot of the oppressed and kawawa overcoming all odds to win also typical of Filipino movies. Sadly, the fate of our movie industry is the opposite—it’s moribund due to lack of creativity in churning out quality ones.

Watching TV in Mumbai is very different: HBO has commercial breaks, there’s no NBA shown even when it’s the finals (my companion’s disappointed due to this. Good thing I like football), news of raunchy concert of Enrique Iglesias being condemned by media for alleged indecency, the hyped up Pakistan vs India cricket match and the gory images of a deadly stampede of poor people promised free sarees (traditional Indian dresses) by a local politician. 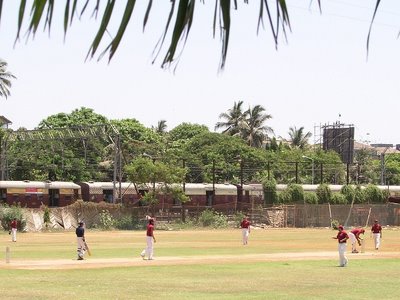 (Indians are passionate with Cricket as much as football)

It was also the time of national elections where Manmohan Singh ascended into power. Notable of the elections there was the relative peace of the city compared to Philippine elections when booze overflows in what you’d think were fiestas just to woo the poor into electing them. You have to take note that illiteracy rate in India is high that people there vote not by writing names but by associating symbols to the candidates.

India is a land of great contrasts: where the modern world is evolving rapidly but the people are still moored on to solid cultural grounding and ancient beliefs, where elegant skyscrapers’ backdrop are complemented by informal dwelling places much too distressing to put Manila’s own slums to shame, where Indian brainpower is acknowledged the world over in spite of high number of illiterate people, where scientific progress is highly visible yet many people still worship animals science classified as pests. Where on earth can you find rats being fed and commune with people? Where else can you list at least one god for every three people on that subcontinent? Where cows are holy yet looked as sources of artery-clogging cholesterol in the west. 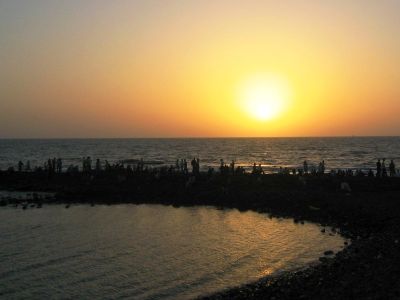 (Sunset over the Arabian Sea near my hotel. Did you know that it's normal for Indian men to hold hands while walking? Weird and met with jeers anywhere else)

Much of India is too weird when viewed through the eyes of a different culture-- welcome to Bizarre India!