The news was blurted out on TV as early as Wednesday that the supertyphoon Milenyo is entering Philippine area of responsibility and classes at all levels and work in government offices were already suspended.

Thursday morning going to the office was a breeze but around lunchtime powerful wind arrived taking with it roofs and making trees dance to its beat, if not completely blown away.

Work was suspended starting at 12noon but I decided not to go home and let the storm pass us. It’s a wise decision for out our office window, Milenyo was seen battering into submission everything that stands in its path like watching National Geographic series on nature's fury.

When the howling winds went away, we decided to go home and saw with our eyes the considerable damage the storm has wrought.

On Valero Street near our office, a delivery truck overturned and blocking the road as shown (picture taken using my camera phone again, sorry for the poor resolution and Milenyo’s wind made my hand shake) 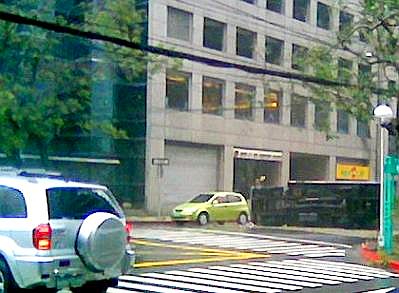 Trees near Makati Sports Club were badly damaged as well as those near Paseo Center. 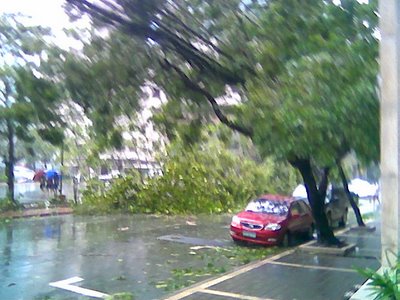 As I made my regular commute to QC, I took the Manila route since the MRT was still inoperable, and there I saw the bigger picture of nature’s wrath: blackout almost everywhere, trees uprooted, electric posts fallen, missing billboards (welcome thought) and houses badly needing repairs.

Passed by Arroceros Forrest Park, the site of protracted battle between pro-conservation Winner Foundation and “pro-teacher” Manila Mayor Atienza, where most of the trees were decimated.

On personal note, Milenyo is the most powerful typhoon I’ve seen to hit Metro Manila— plunging the once bustling megalopolis back to the middle ages!

I agree, it was VERY powerful. I never experienced such a typhoon in my whole life but we survived, didn't we?

i've experienced much stronger typhoons that that in my hometown Paete (Laguna) when the eye of the storm passed by directly. At the center of the typhoon is serene with no wind and rain but wait til the tail end lashes out.

I'm confused of the name of that one but I remember vividly the destruction caused by it. The river overflowed, mud covered the streets, trees blown away and tilapia and bangus came so cheap due to damaged fish cages :)

I visited Paete some time ago. It is a nice little town. I went there to take pictures of the beautiful church.
One day... I will go back to cover one of your fiestas.

Of course I will link you. I don't know why this wasn't done earlier...