WALK BACK IN TIME

got this email announcement a few weeks ago and will post this just now :(

it's never too late though :)
been a long since I visited that part of the world 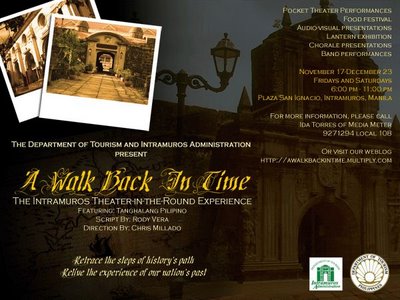 AUDIO VISUAL PRESENTATIONS
6-7pm and 9-9:30pm on the walls of Plaza San Ignacio
a.. Land of Our Birth
b.. Peoples of the Philipines
c.. Intramuros: Sanctuary of the Filipino Spirit
d.. Images of the Philippines
CUISINE FESTIVAL
Filipino - Via Mare (including the puto-bungbong and bibingka festival)
Chinese/Thai/Vietnamese - ZNH Chinese Bistro
Spanish - Illustrado Restaurant
Arab/Middle East/Persian/Indian - Shawarma Middle
East Cuisine

A Walk Back in Time: Intramuros Theater-in-the-Round will run from November 17- December 23, 2006/ 6 pm-12 midnight.
The event is FREE for the public. Please check the weblog
http://awalkbackintime.multipy.com

I stopped by here last Saturday after class but the performance was cancelled days before because of the typhoon threat. I then headed to Baywalk to take a couple of night/concert event shots. You and Ferdz were supposedly there, too :)

haha...we were looking for you too. We were taking pictures of the photographers near the Arsenic and Remedios fountain QTV event...

we actually looked for a guy with a D80 but failed...we don't know how to contact you :(