I have to admit to you that I didn't bring out my camera to take pictures while Ferdz was rummaging for certain DVDs in quiapo, asked for spare batteries in on Hidalgo St, paused momentarily at Plaza Lacson, formerly named Plaza Goiti. It was only Ferdz who took pictures of the "indefatigable" Arsenic long standing in that pedestrianized road.

It was only upon reaching Escolta that I took out my camera and snapped at different buildings that I later learned Ferdz liked so much and even compared them to Singapore's magnificent buildings. (We even talked about the Fullerton in Singapore that used to be their post office building but that's another story)

Continuing with our journey on foot and snapping away at every opportunity, we reached the magnificent Perez-Samanillo building, an art deco creation of Juan Luna's son Andres Luna de San Pedro. Across the edifice is the neo-classical Regina Building (shown below in monochrome plus a little noise just for fun and experimentation). 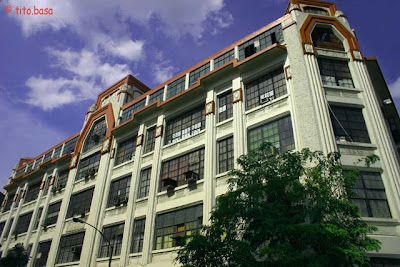 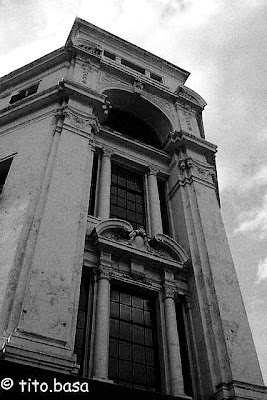 Trudging slowly westward, we arrived at Calvo building which, unknown to many, houses the Escolta Museum (open on Sundays) with memorabilia and photographs of Escolta of old. Across this building is another art deco gem designed by Juan Nakpil in 1935-- the Capitol Theater -- with its relief carvings and again in sorry state. 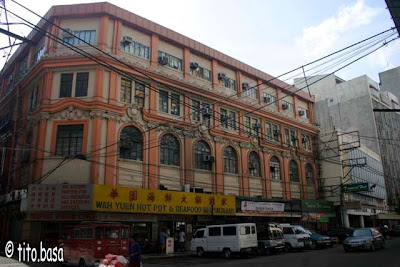 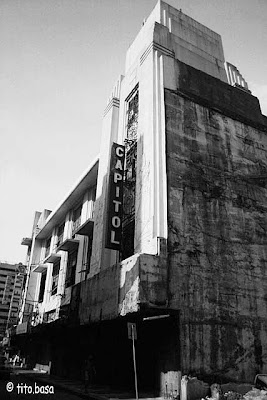 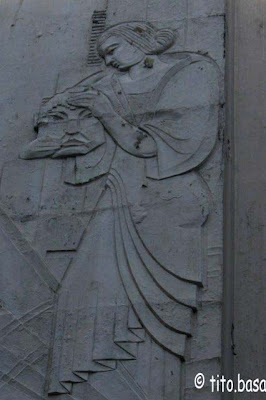 relief carving on the facade of Capitol Theater

Continuing with our journey we chanced upon the Filipino-Chinese WWII War Memorial near the banks of Pasig river bearing these inscriptions: "This memorial was erected on June 12, 1995 by Confederation of Filipino Chinese veterans in remembering and honoring the anti-Japanese heroes who died in defense of our country during the Second World War in 1941 to 1945." 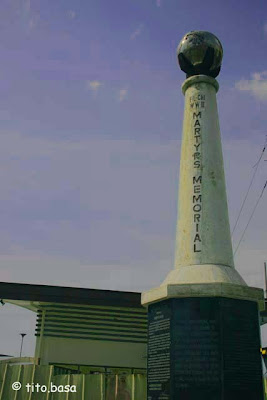 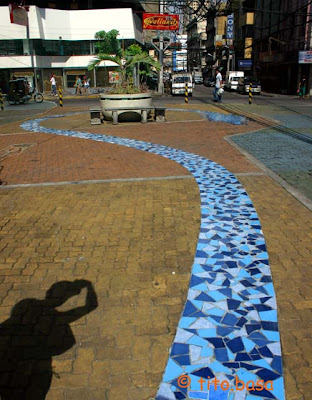 portrait of Ferdz: photographing the shadow of the photographer :)


How to get to Escolta, Manila:

Commute: the eastern end of Escolta is accesible via LRT Carriedo station where you can walk and pass by Plaza Lacson (formerly Plaza Goiti), and Sta. Cruz church.

Commuting to Escolta is also easy from Taft Avenue, if you don't like the LRT, you may take jeepneys bound for Sta. Cruz for the eastern end via MacArthur Bridge, or those heading to Divisoria for the west end of the street via Jones Bridge

Directions by car/taxi: from Manila City Hall take Jones Bridge. Escolta is just the second street to your right after passing Jones Bridge. (Not sure but think Escolta's a one-way street). Landmarks of the place include the old Savory Restaurant.

Love the last photo the most!

this is the area we skipped before, right? sayang, maganda pala!

and here are some more ericsa :)

r.o., let's revisit one of these days. just text me. there's always somthing new to discover there :)

hi! great site, exactly what we filipinos need to appreciate our country more. how did you get to escolta? my friend rode a river bus and went through the stretch and got off in escolta as this is the last station.

That was a very nice Manila experience...