History and Legend of Ati-atihan Festival in Kalibo, Aklan

It's the Sto Nino month once again this time of year so I'm sharing pictures of the Ati-atihan festival in Kalibo in 2004 (using a borrowed Pentax digital camera from an officemate. 'twas only a few months later when I bought my first digicam: the Canon Ixus IIs)

The Ati-atihan Festival is a centuries old tradition of Aklanons commemorating the arrival of the 10 datus from Borneo.

What was once a legendary celebration whose story, handed down through oral tradition, was later turned by the Spanish colonizers into a religious festival honoring the Sto Nino. It's present form is a mixture of religious celebration, hedonistic revelries and bacchanalian festivities. What sets apart this festival from the Sinulog of Cebu is that people can be part of the grand parade of colors and not merely spectators and kibitzers. 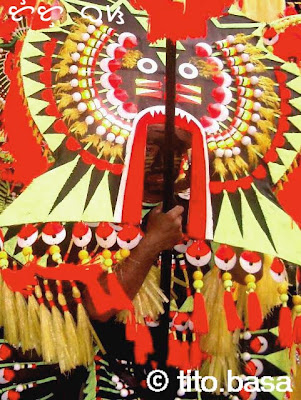 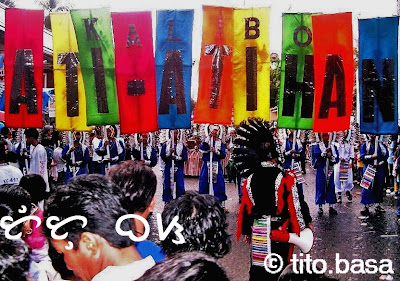 The legend of the Ten Datus from Borneo is generally accepted by modern historians but the story of the barter of Panay with Datu Puti, leader of the ten Bornean datus on board balanghays, gave Marikudo, the local chieftain, a golden salakot in exchange for occupying the land, is now debunked due to claims that the Ati people, up to this time, are basically gatherers of the land and do not engage in land possession.

Modern historians also argue that if the indeed the golden salakot was really given, it would have been just a gift and not a barter in exchange for "land titles."

So many things I learned about history taught me by my teachers that are no longer accepted yet I still see many of them being passed around like the hoaxes of Kalantiaw, Maragtas and so many others. I wish to find the time to post them here.

By the way, if you don't have the time and money to catch a plane for the upcoming Dinagyang in Iloilo, why not set out on a journey to my hometown, Paete, to witness another celebration in honor of the Sto Nino where people douse each other with water particularly those wearing red.

The festivity, called Salibanda, held on the last Sunday of January, ends with a fluvial procession on the shores of Laguna de Bay. This celebration, like almost everything else, reeks with fanaticism bordering on idolatry having lost the true spirit of celebration.

Also Recommend protecting your expensive cameras from water or better bring waterproof ones :)

i havent watched of the feast in the visayas, namely ati-atihan, sinulog at dinagyang... sana i can some day... thanks for visitng... :)

The Ati-atihan Fstival is high on my wish list.

I also noted the Salibanda Festival in Paete for next year.
My camera is still recovering from the water it got during the Higantes Festival... ;-)

I guess your town organize some other Festivities during the year.
I would be very thankful if you could give me the dates. I am always on the look out for fiestas.

nice colorful photography! i almost attended this festival but had to change my plans because i failed to get the 99peso flight to aklan..hehe

I've never seen such festival before and it looked really awesome na!

One of these days ... makaka-attend din ako nito :)

another senor eric, you are! thanks for sharing the wonderful pictures (pyro pictures included) and the stories (slowly, they educate my culturally blank mind).

i havent seen the actual ati-atihan festival, although on some parades i already saw ati-atihan performers. It must very colorful and very interesting for photography. next year hopefully i can attend the festival.

hi to all, do try to witness the ati-atihan and other colorful festivals here. Others I've attended were Panagbenga (or Baguio flower fesstival 2003) and the Kadayawan (2004) of Davao.

Sidney, i'll post the paete schedules here one of these days.
I can even your own tour guide in my hometown even around Laguna :)

kyels, next time schedule your visit on January (3rd sunday). go to boracay then witness the ati-atihan or book in Cebu for the Sinulog :)

Pasig is a living waterways, as it breathes it is cleaning itself in and out of the bay. Refreshing the waters all the way to Laguna de Ba'y.

Alas, the disappearance of the reeds, nilad and Philippine indigo(etc..) that used to be all over the Manila swamplands the process no longer has filters to keep the balance of life in the area.

Paco all the way to Malate were swamps at one time.

Hi, really nice pics and some history about the legend of maragtas. indeed many claim that its fake, and sure enough, maybe it is. but one thing's for certain, it was only a mere legend before it was unjustly made a part of history. God bless.

Ati-atihan is one awesome festival- the one and true Mother of all Philippine Festivals! I haven't attended for years but will do so again next year.