"Manila took a long time to make. What is now its ground used to be sea. The sea reached as far as the present towns of Mandaluyong (‘a place of waves’) and Makati (‘a place of tides’). No one knows how long it took to turn sea into land. But we do know who built a site for Manila. The builder was the Pasig River."

Such were the words National Artist for Literature Nick Joaquin wrote in his book Manila, My Manila.

It was, and is, the Pasig river who built, and continuously building, Manila. Technically a tidal estuary, the direction of flow is determined by the water level difference between Laguna de Bay and Manila bay.

Sensing the urgency and limited slots available for the tour, I made a quick call to the posted number and reserved me a seat and paid promptly since Ayala Museum is very near my place.

On the day of the cruise, the organizers and participants met up at the Ayala Museum then boarded vans that took us to Isla de Convalencia occupied by Hospicio de San Jose where a ferry is waiting for us to cruise the historic river who built Manila. 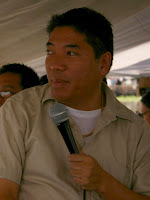 The Tour, with about 20 people, including media people and a Coast guard personnel, was enlivened by Prof. Ambeth Ocampo, the current chair of the National Historical Commission, with his authoritative information spiced up with historical gossips and trivia.

We set sail westward heading towards the mouth of the once beautiful river passing Ayala Bridge, Quiapo, Arroceros Park, Quezon Bridge, Sta Cruz, Intramuros, MacArthur bridge, Binondo, Parola and Baseco before turning around going the opposite direction retracing the water to Isla de Convalencia, our "anchorage", passing through the once millionaire's district of San Miguel, the regal Goldenberg Mansion and picture-perfect yet picture-censored Malacanang Palace, Mabini Shrine, Nagtahan bridge (where our Coast Guard escort left us), Pandacan, Sta Ana, Makati, Mandaluyong, Pasig and Marikina before turning around again to Guadalupe where waiting vans took us to see the exhibits of paintings and artists’ rendition of their dreams for the beauty that was Pasig
Join me as I take you with me in my tour of the once pristine river 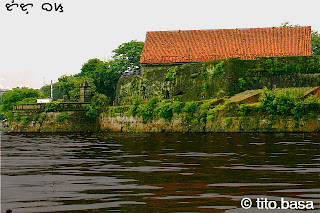 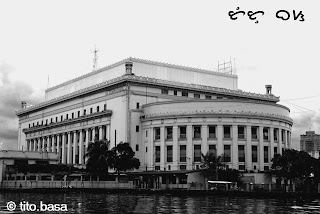 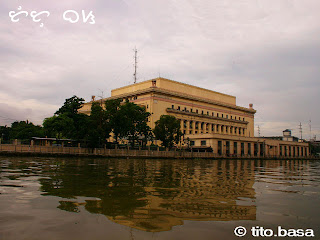 the post office building: a Juan Arellano masterpiece along with the nearby Jones Bridge, Metropolitan Theater and Executive house (now the National Museum) 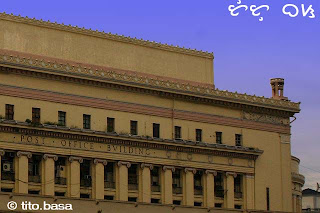 closer view of the river-facing facade (alright I cheated here. I replaced the grey sky with blue one)

I was in Manila and managed to see Pasig River ... Damn, I seriously am missing Pinas.

t2b, you ddnt txt me about this! i would've loved to join this one, barring acts of God :(

Wonderful! Can't wait for the next installment.

Wish I had known about this.

how much is the tour and until when would it be?

I've lived in both Pandacan and Pasig for quite a while but I've never really learned about the history of the Pasig river.

cool! ambeth ocampo was my history teacher back in college! :)