On the day of the first anniversary of the Palawan incident, I invited Armi and Oliver plus a few close friends of Rolan to his favorite restaurant: Dong Won Garden on Jupiter St in Makati near corner of Makati Avenue. (If you know Quick Stomach, it's easy to find it) 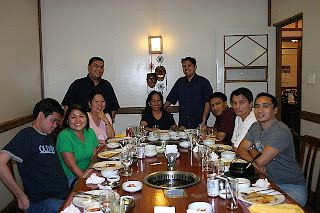 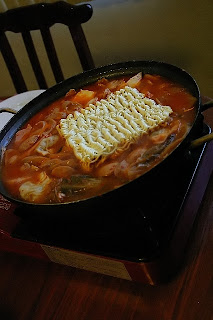 The fiery hot soup mixed with Lucky Me noodles shown on the left. (just joking here)

We ordered Chicken (tak/dak) and Pork (Dweaji) galbi barbecued in front of us eaten with a dollop of a brown gravy.

Fresh lettuce with a heap of appetizers, rolled and eaten like taco sandwich; more like Korean Lettuce Wraps.

It was my Korean friends in my "past life" who introduced me to Korean gastronomic delights particularly Dong Won as well as a few words and phrases.

I then introduced Korean food to Rolan, then engrossed in everything Korean and even planned on enrolling in a Korean language class.

One thing my Korean friends weren't able to know whas what's meant by my parting words to them: Ewansayo!

----
Note I was constrained to use ISO1600 and large aperture to take pictures owing to low light conditions of the room. Turned out alright :)

I am hungry now!

great food and equally good company and time to just have a good time...what else could be better.

wow... parang masarap lahat ah.. i haven't tried any korean resto yet, feeling ko ndi ako makakain eh..hmmm but looking at your pics i think i should try that one of these days :D

The one with the pusit looks good!

i remember my trip to seoul last march after reading your post and looking at the photos.

do they serve live baby octopus tentacles? had that in seoul and it was great. they serve it as sushi.

peejay, they don't have it there. Saw that live octopus part of an Amazing Race detour/roadblock. interested in that too but not here since they said the weather in Korea is ideal for that, not in RP :(