In this last part of the Historic Tour of Pasig River series made possible by the Ayala Museum and Pasig River Rehabilitation Commision, let me take you with me on a journey when the mighty Rio del Pasig in chronological order: Jones, Quezon and Ayala (MacArthur Bridge completes the four grand puentes of Rio de Pasig 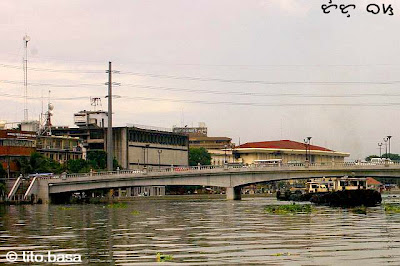 Jones Bridge constructed in the 1920's as part of the grand scheme of neo-classical architecture in Manila, designed by the same architect of the the Post Office Building, Metropolitan Theater, and US Embassy: Juan Arellano.

Jones Bridge was named after William Atkinson Jones, a member of the U.S. Congress and chairman of the Insular Affairs Committee who sponsored the Philippine Autonomy Act in 1916. 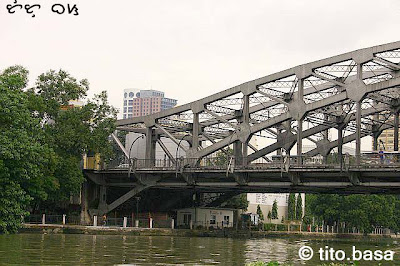 the south end of Quezon Bridge beside Arroceros Park 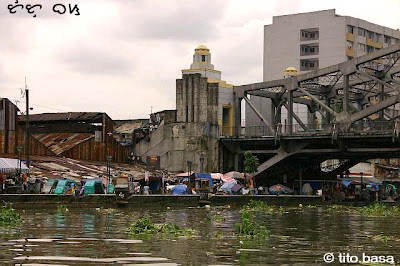 the north end of Quezon bridge near Quiapo

The precursor of Quezon bridge, called Puente Colgante (suspension bridge) held the distinction as the the first suspension bridge in East Asia (I don't use Far East since I'm in the Philippines) , built in 1852 with two lanes in opposite directions for carriages and a pedestrian lane in the center island but demolished in 1938 to give way to vehicular traffic. 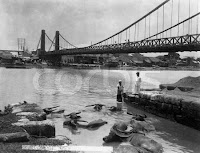 Quezon Bridge was opened a year after the Golden Gate Bridge was inaugurated, sporting the art deco style and inspired by the Sydney Harbor Bridge-- no wonder it looks similar! 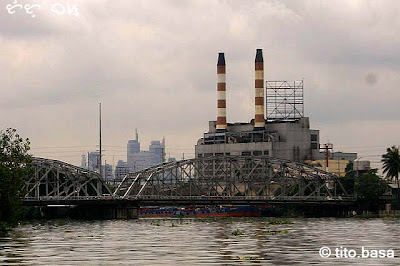 The third tulay to be built spanning the Pasig was the Puente de Convalecencia, now known as the Ayala Bridge, originally composed of two separate spans connected by the Isla de Convalecencia, which is home to Hospisio de San Jose, the bridge over this island was originally made of wooden arched trusses. Completed in 1880 and suffered major damage to the structure and collapsed completely after 10 years. This was subsequently replaced with a simple metal saw trussed bridge during the 1890's, designed by an engineer that goes by the name of Gustave Eiffel, who later gained fame for the eponymous tower in Paris and the interiors of the Statue of Liberty, in the construction of the bridge in collaboration with Ayala y Cia. 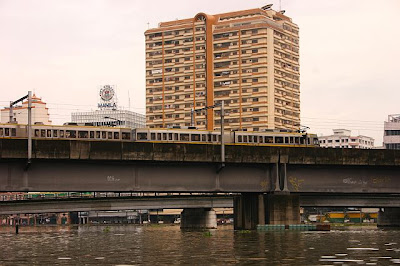 Those four original bridges must've been an awesome sight back then but sadly the original ones were destroyed by the Japanese during the second world war and what we're seeing today are poor reconstructions of the originals.

This last picture of a bridge crossing the Pasig, bears the mission of the Pasig River Rehabilitation Commission's mission: 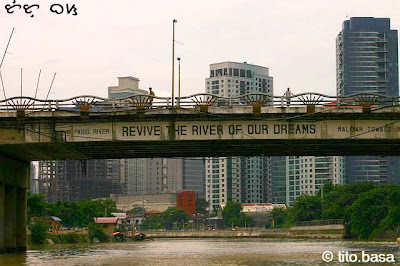 PRRC may have been beset with problems particularly lack of funds but their continuing program of accomplishing their mission is now noticeable partcularly with the relocation of "informal settlers" along the riverbanks, the construction of linear parks of the cities and the eventual improvement of water quality.

Note that under Proclamation 780, the annual Pasig River Marathon is to be held on the month of February also declared the Pasig River Month.

This year, the marathon will be held on February 25.

the small black and white photos were not taken by me (obviously I haven't been born yet) but now belong to the public through the US archives. If I should be proven wrong, please drop a comment and I will oblige by removing the picture posted here.

And thanks for sharing po!

Thanks for sharing brief history of how the historical bridges spanning the Pasig River were built.

Thanks for sharing:D learned a lot from those.

Especially the thing that the quezon bridge was opened a year after the Golden Gate was inaugurated. I never knew about that.

You see how Filipinos are so creative and resourceful to use styropor to make a watercraft.

Interesting history of the bridges.

thanks for posting this, i love the pics and the trivia that comes along with each.

No Guadalupe Bridge and the one connecting C5? Oh well, they're not exactly historic bridges, being built only in recent decades. But these two bridges are the ones I usually cross.