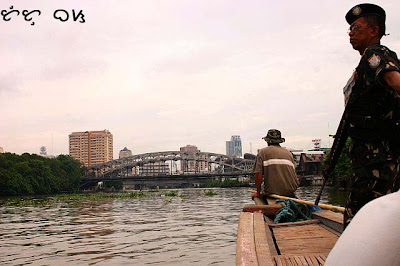 I don't have picture of Malacanang Palace, the Goldenberg Mansion and Mabini Shrine all visible when we passed by. the guard alighted upon reaching Mabini bridge.

Shown also on the photo are Quezon Bridge leading to Quiapo and green Arroceros Park, known as the city's last lung, haven of artists and birds, and site of a legal battle between Winner Foundation, the caretaker of the park, and Manila City government, (in)famous for tearing down heritage structures. 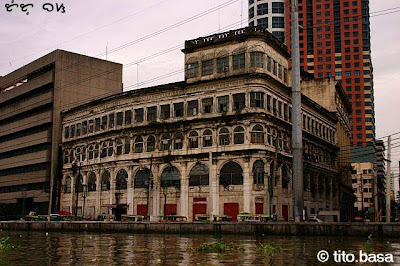 El Hogar Filipino 1914 Beaux-Arts style buidling. I can only imagine how grand this building would have been in its heyday. This is also a favorite venue for shooting music videos of Sarah Geronimo, Bamboo et al as well as commercials-- even the current "Kapuso Walang Kinikilingan" boast has this building as a background! Old headquarters of HSBC is also visible behind the building 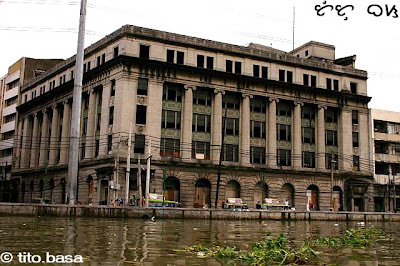 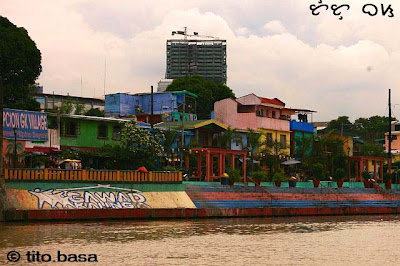 the colorful Gawad Kalinga community on the Mandaluyong riverbank near Guadalupe, said to be the Filipino's legacy to the world and a brainchild of Tony Meloto (hope to volunteer someday for this worthy endeavor). It was said the house owners were given different colors of paint resulting to a multitude of colors 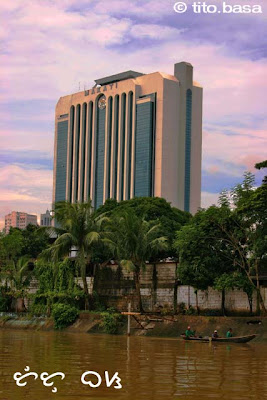 other pictures I made into a slideshow to save on bandwidth and for added impact :)

next in line: Bridges of Pasig and its riverine inhabitants
until next time, folks!

Whatever you've shown here made me miss Pinas even more ... So much.

Will be back later to read your other posts... :)

Great pictures! You really have to look clearly to see that our country is beautiful. Parang Venice - especially the El Hogar and the Pacific Commercial Building pictures. Just wondering... how does it smell?

needless to say, el hogar is my most favorite building in binondo. have you gone inside?

thanks for dropping by

wala amoy as in or baka immune na ko

i really need a new lens to make my pics sharper. my kit lens is slow :(

no wonder Ivan Henares is excited about walking the banks of Pasig River. He's been bugging me to go. Now, i think i'd want that tour.

welcome to my site Karlo, so you and Ivan went there? he also has a great blog and been around the country to my envy :)

This photo has captured the El Hogar building to give a nostalgic feeling to the viewer. Can someone, or the city government do something to help preserve such a beautiful structure? Thanks to the photographer, a feeling of pride was instilled. HELP PLEASE!

anonymous, the Heritage Conservation Society is is talks with the City of Manila for this advocacy :P