Back in the early 1900s, during the time of the American eagle period in our nation's history, there emerged the grand neo-classical and art deco style buildings in Manila; the Americans even brought in renowned architect and urban planner, Daniel Burnham, famous for shaping city plans of Washington, DC, Chicago, and Baguio, to plan the nation's capital.

While the United States' economy traversed the economic downward spiral due to the Great Depression, the Philippine economy rode high with unprecedented growth. Along with this came economic prosperity that made many foreigners coming to our shores dubbed then as the Pearl of the Orient.
One of those who came to the Philippines was Laurie Reuben Nielson, by way of New Zealand, quickly made successes in businesses. He later became involved in building an airport and aviation school in Manila, badly needed at that time, due to the booming needs of the economy. He was able to convince several investors in the airport project and secured a lease from Ayala y Cia for several hectares of land carved out of the vast Hacienda San Pedro de Makati.

The new airport, baptized Nielson Airport, was completed in 1937 and touted as the largest and most modern airport in Asia. It became the home of the country's first airline: Philippine Air Taxi Company (PATCO) and where Philippine Airlines made her maiden flight on March 15, 1941 to Baguio. (Philippine Airlines is the oldest operating airline in Asia, established by a group of businessmen led by Andres Soriano in February 1941)

When war spilled into the country in December 1941 and soldiers of the Land of the Rising Sun overran the archipelago, Laurie Nielson, due to his British citizenship, was taken to Hong Kong while his family brought to the University of Sto. Tomas then converted into an internment camp.

Laurie was never seen nor heard from again and his family moved to the United States after the war.

When airport subsequently transferred to a new location in Paranaque in 1948, Ayala y Cia, reborn Ayala Corporation in 1968, developed Makati into the present modern city while Nielson Tower, with its art deco-inspired architecture that resemble an airplane if viewed from above, was saved from demolition, converted into a library called Filipinas Heritage Library in 1996. 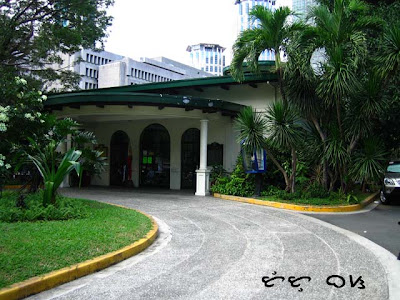 In 2001, UNESCO, recognizing the Nielson Tower for the impressive conversion from airport tower to library, renovation and adaptive reuse, conferred to it the prestigious annual UNESCO Asia-Pacific Cultural Heritage Award,

The same award was given to Gota de Leche building in 2003 and Far Eastern University campus in 2005. 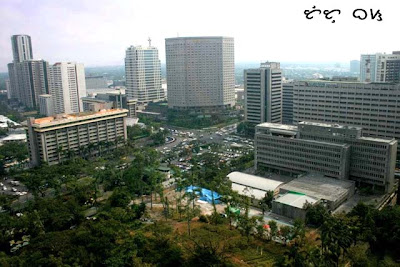 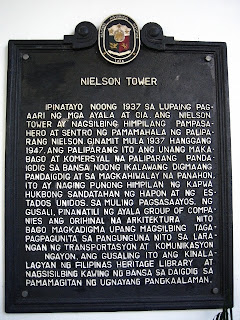 I happened to organize a seminar for my company, the freelance events organizer that I am, shopped around Makati for a suitable venue to accommodate about a hundred seminar participants and this nearby building came to mind: Filipinas Heritage Library and gave me the chance to take pictures of the structure using my reliable point-and-shoot camera. The seminar turned out success to the enjoyment of the attendees and satisfaction of my various sponsors. Maybe I should change career into events management! :)

What a coincidence! I just had a discussion with my friend last night over dinner about the Nielson tower and the library within. She was telling me about a travel writing seminar(of which I am very interested in) that will supposedly take place in there.

I loved your post, it's so interesting to read about the history of this place we take for granted in the heart of our CBD.

Thanks, this is another history lesson for me. Ambeth Ocampo, step aside. Here's Tutubi!

nice view from your office! sakin parating sunrise coz my offie is facing pasig and antipolo =)

Fascinating piece of history; thanks for sharing :)

Do they hold photography seminars in this library as well?

Oh, thanks for this glimpse on history. I like the view from your office. Di ka nalulula?

Ummm.. events management career.. not bad.. why not.. hehehe..

Oh, BTW, you can just leave comments in my blog and I retrieve them when I sign in. Huwag mo na lang pansinin yung Spam Eater.. :)

Just had a photo shoot there 2 months ago.You should check out the view of from tower 2! I think that used to be the control tower of the airport. They have this brochure with pics of the old airport. Sana humingi ka. Now the place is open for all kinds of functions even debuts and weddings!

thanks for the walk through history. very interesting.yaehp

remember what I told you? Right under your nose hehe

i'm flattered but i'm just a student of history and of Ambeth Ocampo :)

Someone sent me a really cool old shot of what he described as a "triangular park in the financial district"... could this be the same location as the photo you took from your office window? Check out the PHOTO HERE!

Ayala Avenue in the 60s

The Makati We Once Knew

I heard about the old airport but I was thinking that EDSA was an old runway and I thought the old Manila International airport was built at its present location.