The Liberation of Manila

I would rather call it the senseless destruction of Manila and the massacre of innocent civilians on February 3, 1945 up to March 3, 1945 near the close of the second world war.

The "dynamic duo" of American carpet bombing and Japanese demolition resulted in the destruction of grand churches, exquisite buidings, museums along with priceless collections, and grand bridges across the Pasig River-- historical and cultural treasures of Filipinos lost forever! 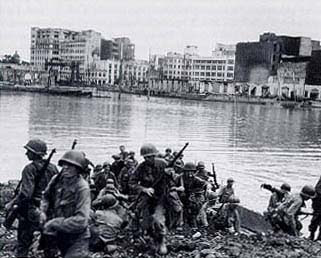 Rear Admiral Iwabuchi Sanji, a navy officer untrained in urban warfare, led the Japanese defense of Manila, committed to defend the city to the last man, disobeyed orders by Gen. Yamashita to retreat to the mountains of Baguio where it's easier to defend.

(Gen. Yamashita surrendered to the Americans in Kiangan town, Mountain Province at the end of the war. He later went through a mistrial by an American kagaroo court then eventually hanged (in Los Banos, laguna) by the Americans for war crimes committed in the Philippines even if he wasn't actually responsible for them-- he came to the Philippines only a few days before liberation-- a fact unknown to most Filipinos)

The Americans led by Gen MacArthur, ordered the retaking of Manila at all costs at the soonest possible time seen as a boost of his ego, giving the go signal to level the once proud city instead of using other tactics to capture it. (The man thought and planned in advance for a celebration announcing the liberation of the capital to the world even before the battle began-- that's something most politicians are good at)

In desperation, on realizing impending defeat, the Japanese defenders entrenched themselves in various buildings, and turned their wrath on the civilians resulting to deaths of innocent civilians estimated to be a hundred thousand, and countless rapes of women witnessed by foreigners.

Only two of the original seven churches of Intramuros, San Agustin and Manila Cathedral, remained standing. Manila Cathedral needed to be demolished and replaced due to irreparable damage.

The battle of Manila was deemed the deadliest urban fighting of the second world war and made Manila the most ravaged city after Warsaw. 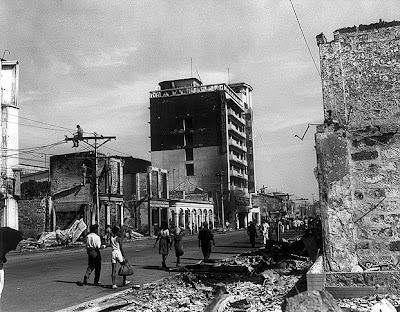 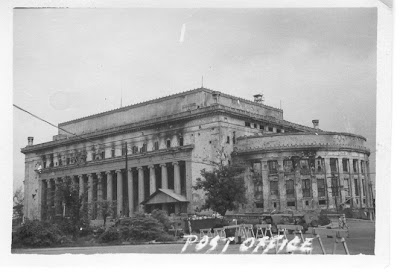 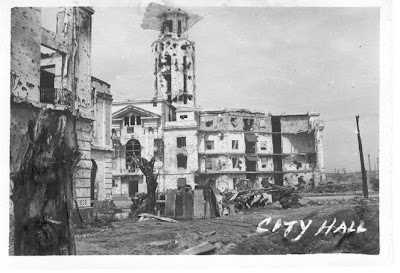 Up to now the Japanese government is in denial of the occurence of the Manila Massacre as well as others such as the more (in)famous Rape of Nanking (China) and other atrocities across Asia even glossing over these events in present history books to the dismay and outrage of Asians particularly Chinese and Koreans.

It's also perplexing to note that the US didn't pursue much of the war crimes against the Japanese emperor, the royal family and other warmongers not like the zeal they had in pursuing warmongers in Europe especially the Nazis. In fact, they even absolved some people directly responsibile to the war. This is the reason why some nations particularly Russia have yet to sign the document officially ending the war with Japan. Most of the US documents pertaining to these issues are still classified up to this day. 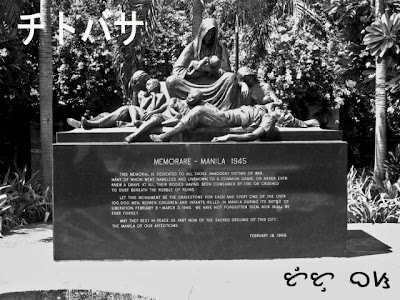 In war, there are no real winners, all are losers!

Also wrote my name both in Baybayin, the ancient script of our forefathers and Japanese (katakana). Isn't it cool?

i agree there is no true winner over war

I grew up admiring MacArthur and even read his 300-page or so biography, "The American Ceasar" by William Manchester. Through it all I wonder why he never made it as president of America as his once underling, Eisenhower, had done. However, after my return to Manila (and after reading some interesting historical tidbits about this man), it suddenly dawned on me how fortunate the entire world has been that this man never made it as president of the US.

Is the last photo a spoof or parody of Michelangelo's "La Pieta"? I like the photo. About the martyr's memorial in Naga, there are actually 15. Those 13 you said are probably from Cavite. Another, your "alibata" of "tutubi" is spelled differently.

Great history lesson !
Too bad mankind are not learning much from the past...

thanks a lot for this history lesson. it's my most favorite part of philippine history and the more i learn about it, the more i want to travel back to that period. but of course that's just wishful thinking. =)

Too bad the intention of the nations can only speculated upon, which is quite telling why we still have not achieved genuine peace.

Señor E, the title "American Ceasar" is very apt for MacArthur. Too bad for the Philippines, during his stint in the country, MacArthur was still given the benefit of the doubt. But his plans in the Korean War finally discredited him at least to American politicians. But that led him, an old soldier then, to quietly "fade away".

Eric,
yep. i used to wonder why he didn't make it to the white house. good for the US and world, i later learned

i mixed it up. the 15 martyrs of naga that includes Lerma :(

sidney,
those who forget the past are deemed to repeat it

carlotta,
i wouldn't want you to travel back to that period. too dangerous. you may not get the chance to "go back to the future" :)

there are times when I wish i also could :)

iskoo,
good for you your lolo's still alive. My grandfather died waiting in vain for the promised US help on them...our war veterans are dying one by one

dave,
we can only dream of John Lennon's wish: Imagine!

Interesting piece of history. I didn't heard of it during the history class. Common notion is that Yamashita is the bad guy and MacArthur is the good guy. It is only this time (upon stumbling your write up that) I understand how writers of history can be biased at times. We probably need to read as well Japanese account of WWII then we'll know the real score from both sides of the coin...
Thanx for sharing...

familiar name from My Islands Philippines :)

i didn't say Yamashita is a good guy. I merely stated that he's convicted of a crime he didn't commit since he's been here only a few days and not directly in command of those savage Japanese soldiers.

the japanese accounts of history are so short, as i said, merely glossed over stating Japan went to war, many were killed blah, blah blah that infuriated China and Korea so much everytime a new edition of textbooks come out of printers

Well Mcarthur is the Hero and the Japanese are the bad guys because as they say"history is written by the victors". Do you know that Dwight Eisenhower, was an aide de camp of Mcarthur for several years in manila? But they it seems that they did not get along well. When Mcarthur was asked what he think of then President Ike, he replied" the best damn secretary I ever had"

no qualms about that good/bad thing.

will blog about the other side of macarthur one of these days...

so called macarthur cronies and his ill-gotten money :)

Thank you so much for those pictures. Truly, nobody wins in a war, just full of destructions. Do you have any pictures of free war Rizal Memorial Stadium. I am 56 years old now, and my dad used to take me there and watched baseball games. As a matter of fact, the first baseball game I saw was between our Pilipino players and Mithushita Electric Co. of Japan way back in 1958. God bless you. I welcome any comments on my letter.

anthony, pree-war pictures of rizal memorial coliseum? sorry, but i have none. will ask some of my friends including Google plus my bookmarks.

do drop by again

meow tutubi, wow great post... will link this up in my blog ha :)