Finally after much delay, the Pasig River Ferry became operational and with the usual flair of the tutubi in organizing trips, hopped on to the nearest terminal in Guadalupe, Makati on J.P. Rizal St (vying for the highest concentration of billboards per square meter in the world can be seen leading much to urban blight).

UPDATE: This Pasig River Ferry service was discontinued in 2011. Government is mulling reviving the service in 2014 to aid in declogging the Metro Manila of heavy traffic but it needs additional capital and investors to revive it.

The sky was cloudy, unlucky me, so I half-heartedly took pictures inside the airconditioned catamaran with blue plastic seats through glass window after asking permission from a man in uniform whose job, I already know, is to ensure we don't take pictures of the Palace of the Small Iron Lady of these islands i.e. Malacanang.

Ayala Bridge with its steel trusses and rivets presently undergoing repair work (left)
Signspotting mode (below)somewhere near Sta Ana displaying the Philippines' vaunted ubiquity of the English language with the river-choking, mosquito-sheltering, floating water hyacinths (Eichhornia crassipes) natives of South America on the foreground. Most pinoys erroneously call them water lily with their beautiful lavender-colored flowers (that I have yet to capture on "film").


Here's hoping someday I get to see how the Nilad tree, where Manila got its name, and the cuyapo (kuyapo/kiapo, lulluan in Tagalog ), a floating plant where Quiapo was named, look like. Both those plants are the places named after them.

With the return of the ferry plying the once pristine river where the city of Manila was founded, may those eponymous flora also return when the river breathes life again.

There's hope; I saw fishes and various species of birds!

Information (as of March 24, 2007): Only Guadalupe, Hulo and Escolta terminals are completed. Each trip costs P25 and takes almost an hour only from Guadalupe to Escolta, unbeatable by any form of land travel unless you're with the Iron lady convoy. Ferries are airconditioned catamarans (double-hulled). Trip schedules are spaced 55 minutes apart starting at 5:30am with last trip at 9:05pm 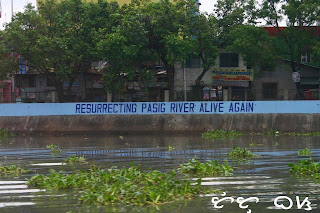 I have blogged about the Pasig River before on a trip with Ambeth Ocampo, historic bridges, lighthouse, structures and
riverine inhabitants.

To all my legions of readers (too few, actually), I'm thinking of organizing an "unplanned" trip to Manila on board the ferry one of these days. Let me know what ya think! :)

Maybe it is better to wait till the end of the year when the other stations along the Pasig river will open.

I wonder if the security guards are afraid we might catch a glimpse of GMA in bathing suit swimming in the Pasig River in front of Malacañang. ;-)

hey that's promising news. will it get people out of their cars? One can only hope.

btw, I read somewhere that the Pasig River revitalization project (i.e. bringing back the flora and fauna of Pasig, cleaning up the river, etc.) has been shelved. That would be a shame if true.

Count me in, Tito!

When would the Marikina station be ready? Sana you can guide us around that area as well if and when the ferry reaches that point!

That's really great news. Thanks for this wonderful info. I hope this ferry would help unclog the traffic, develop and beautify the Pasig River and help us Pinoys to appreciate the metro (hope hope!).

I don't know what the Nilad looks like either.

thanks for adding me :)

Is it still operational? I really would like to try it too. I heard the river still thinks even with the ferry enclosed & airconditioned..ajay

wil, the pasig river rehabilitation is not shelved although it's moving slowly :(

ajay, the river doesn't stink like it used to. you won't smell it from inside.

but maybe i'm just immune to it already :)

Any given madness said...

i actually planning a trip like that eversince college, but nothing pushed through. i hope i could hop along.

Within the next 2 to 3 years, I am looking forward to see see tens of thousands of electric vehicles and bicycles plying the streets of Metro Manila. In view of this, authorities/our leaders should build several electric charge/swap battery stations within the mega-city. More planting of trees and plants and more greener and spacious parks (3 to 4 parks as big as 20 to 40 hectares each) in the city of Metro Manila.