After the exhausting team building/light trek activities and forgettable dinner by the beach (didn't I tell you food in the tourism-accredited facility is not worth the price tag?), most of us raised our hands when one of the leaders asked us if we wanted to hunt for ghosts in the old hospital building where ghosts of dead Japanese soldiers still on tour of duty can be caught on film.

Oh boy, this is the most exciting and much awaited part of the day!

But sadly, one of the guides informed us it was already too late since too many spirits will be disturbed, the foundation banned ghosthunters to stray near the alleged haunted grounds.

To my dismay, I just pointed my camera towards the pier where Gen. Douglas MacArthur mentioned the all-too-familiar "I shall return" before boarding a PT boat to escape and leave his men behind and here's what I got: 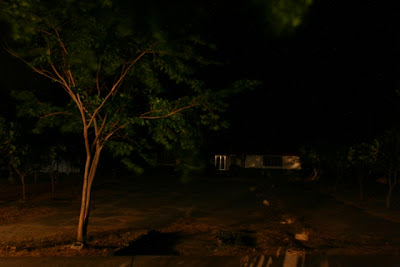 I saw a black cat crossed the frame of my camera but it did not register on the picture-- not even a slight shadow. There are many black cats at the recreation center, by the way.

The following day, I took my friends on the tutubi DIY (do-it-yourself) tour of corregidor and went to places not normally visited by regular Corregidor day tours. One of those places are the ruins of the hospital, abandoned and creepy, with its walls showing signs of bullets and bombs, it's halls filled with litter, crevices filled with plants and trees. We're the only people in that forsaken place with writings on the wall, vandalism, graffiti, and vestiges of a true ghost of history that is the Jabidah massacre that happened here during the repressive Marcos years.

A strange picture pointed to me by one of my officemates later in the office, that a photo taken at the hospital, there's a shadow of a man inside the dreary place even if I was the first one to enter the place and my officemates were busy taking pictures outside. I traced the sequence of my pictures since I have captures that corroborates the claim that all of them were still outside when I released the shutter of my camera. (click the picture if you want a large one) 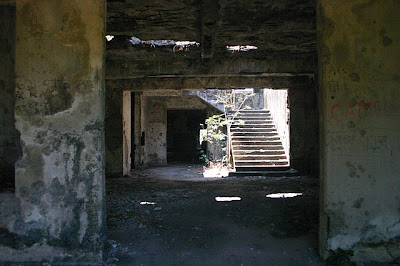 I have to tell you the truth though, the truth that I'm not afraid of ghosts, if there really are such things. I'm more afraid of the living!

Amenities and other activities in the island fortress

For overnight accomodations there's nice Corregidor Inn that my macho officemates were so afraid to sleep alone at night (this I found out with my roommate). You can ask for free tranvia service if you want to tour the island. There's also a van for hire there. 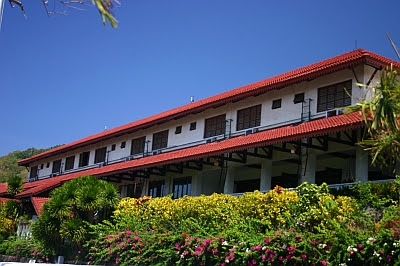 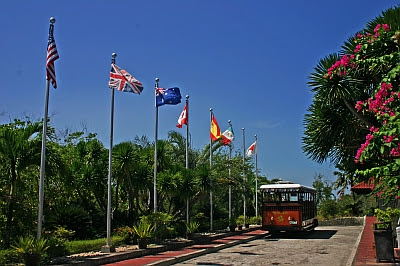 For budget travellers, there's dormitory-like accomodation (that I call charity ward) at P500/night/pax

For backpackers, you can pitch a tent at the beach or near some ruins for a haunted and chilly sleeping experience.

Small swimming pool for children (no lifeguards, swim at your own risk) and the beaches for bumming around.

Aside from the accomodations, there's recreation center, with its all-too-familiar videoke machine, billiards et al, conference room for meetings etc.

Getting to Corregidor requires a ferry ride at the CCP complex (Manila, near Harbour Square) or if you're adventurous, try the outrigger boats on the shores of Mariveles, Bataan. Another option, and free at that, is to join the annual trip sponsored by the Philippine Navy, with it's WW2 vintage ships. Also you may want to join the annual tree planting activity by the Clean and Green Foundation (IIRC).

The daytour to the island is highly recommended due to its being highly organized, but the food, the food at the hotel is lamentable and pathetic for a tourism-accredited establishment serving Filipino food. (I was there thrice and this hasn't changed. Calling Sun Cruises and Corregidor Foundation people, why didn't you act on my comments and suggestions?)

More information about Corregidor tours and hotel accommodations can be found at the official website of Sun Cruises.

And you thought I'm gonna blog about Corregidor for eternity? :)

that second photo gave me the creeps.
paranormal experience is real and can be proven by science or facts.
photos, audio recordings and other media have documented the existence of "lost souls" in this dimension. creepy!

hm, we went ghost hunting around our college campus some years ago. didn't capture anything on video or camera. i myself can't detect ghosts anyway.

i guess the videoke has driven most of the ghosts away.

bumming around at corregidor's beach seems like a good idea.

i'm not afraid of ghosts either... it's my overactive imagination that scares me, therefore, i scare myself. =)

the photo gave me goosebumps.

altho i don't have the "third eye", like carlotta i am gifted with an overactive imagination. LOL!

I haven't seen a ghost yet, and I hope I never see one. I'd be scared to death.

The place does look creepy.

Oh, it really must be exciting to go ghost-hunting in Corregidor. I wonder if the ghosts there have been documented... like in that TV show "Ghosthunters." Great pictures, as usual Tutubi!

Very ineteresting, Corregidor is just the right place to hunt for spirits...

And by the way, I do can see some man's shadow on that picture...It's so creepy

the ghosthunting at night is really fun and scary.. but according to our guide, on 10 years he's been guiding the night lateral tours never naman daw cya naka-encouter ng mga ghosts pero usually daw yung mga may 3rd eye ang nakakakita or nakakaramdam... but it was sure fun :)

just proves that theres life after death isnt it? i believe there are ghost ot whatever u may call them. and i may not be afraid of them but exageration of imagination as to what they would appear before you can sometimes give me the creeps.any way. im pretty sure there are lots of spirits in the island ..even me i would prefer such quiet peaceful place add a very scenic landscape.o di ba. libre pa sila sa board and lodging.hahahah

Any given madness said...

i think the "man" in the second photo is just grass or something. It is too small to be the size of an actual man. Oftentimes its just in the mind. I do not have any personal experience with a ghost. I would want to though, but I must not be alone.

Looks like there's really someone there, though doesn't look like a ghost to me. And yes, you should be more afraid of the living.

Beautiful place! I will certainly visit this place. No. 1 in my out of town list.

But the second photo is a bit creepy.

I totally agree with you about the forgettable meals in Corregidor (are you pertaining to the Corregidor Hotel?). I think for such a popular destination, the people behind that hotel should raise their standards and show the world how good Pinoy food is, not just by sticking to the tried and tested (crappy and not to mention overpriced) continental dishes served at their lunch buffet menus.

Btw, Ive done that overnight hike through the tunnels and it was fantastic! Sayang you missed it.

believe me, i see ghosts. of course, in places like corregidor, ghosts wander.

one place which has a high density if ghosts is cambodia. every time i go there, i would always have an encounter.

sorry to all for not responding right away as i've been away on a foreign trip (that i will not disclose at this time :)

most of those recordings will be debunked by non-believers but anyway, everybody's entitled to their own opinion

i saw true ghost of history there :)

stop thinking about ghosts and it will go away

that photo is from the abandoned hospital...creepy indeed...now invaded by trees and plants

ghosthunting there is a regular activity...most pictures are long exposures and it's usual for weird shadows to show up

yes. I can attest that there're no other person there since my officemates were still outside that time and i'm the one who usually enter places first so i can take pictures without them showing up in my frame

hmmm...i still don't know since i'm too skeptical when it comes to ghosts maybe that's why i'm not afraid

there's no plants or trees there in the picture before and after i took that shot. I'm sort of a shutterbug since i have lost of memory card space hehe

do visit. and complain about the foodt the hotel

and you too, do visit. I resolved to visit this place the first since I got ashamed of myself for visiting the Bridge on the River Kwai in Thailand but not yet this one. I ended up going there thrice hehe

wait til i blog about the true ghost of corregidor: the jabidah massacre that is of importance also to malaysians

might the shadow of the man be some awkward rock or piece of wall by the window? anyway, good guide you gave there. i'll put it in mind when i visit Corregidor. ;)

Great Stuff. I like the image in the header. So beautiful. Moreover, this is a very informative post.

Yes indeed its nice, gandang get away sa metro life if you are into adventure and nature history trip this is one for you stayed there last january lang its a man probably in the pics one of the guide they used to play talaga like that I shot one during night tour and clearly see that its one of our tourguide around the corner they knew where you will take a shot :) even in the tunnels in lateral tour i took a shot the tunnel is dark but damn when it flash there is our tour guide cant stop laughing kala ko ghost tao pala hehe!!!