Our company went to Corregidor, with myself part of the triumvirate of organizers, with team building activities in mind, organized by Mentor Group and very similar setup to the popular TV reality game Amazing Race.

We were divided into four groups with the following names that we thought were very appropriate: Hampas Lupa, Patay Gutom, Kapal Muks and Sunog Baga (names that defy direct translation but mostly derisive Filipino terms) and each with own group colored shirts. Names that the organizers were not used to but often shout out the names due to their being unique aside from having a license for derision.

The first part of the event was an indoor game for us to draw rockets using limited amount of straight lines. We won this won due to proper planning, coordination and creativity.

The second event was the team shout and cheering competition that required us to to compose, choreograph, sing and dance aside from usual taunts and heckling other groups. Due to our creative mix of Filipino songs and chorus of the Carpenter's "Sing" akin to Bulagaan segment of a popular noontime show, we handily won this one. 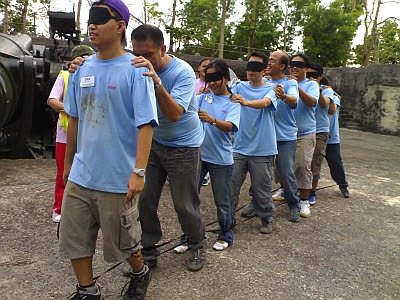 With Battery Crockett as our backdrop, the third part was some sort of n caterpillar obstacle race, with feet tied together and holding on to one another, with some members blinfolded and eventually all but one were, evading obstacles of rocks, tape and markings with non-blidfolded members guiding the "blind." One of the obstacles was tape hanging so low that we were able to slip past through by crawling under. The group with the fastest time wins after deducting penalties for tripping over obstacles. 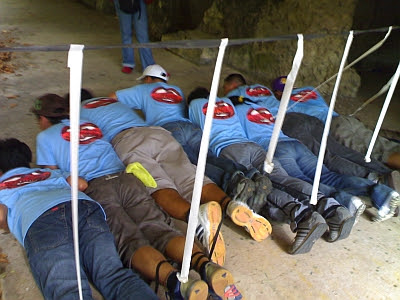 
At the opening part, we were taken to a road junction where we tried to find pieces of maps inside colored baloons and where the clues were hidden in three batteries: Grubbs, Geary, and Smith (for pictures of these batteries, click here)

I naturally chose to proceed to Battery Smith since I haven't seen that battery, only to find out it's hidden and accesible only through a tunnel that you have to descend to using a rope. The battery looks so much like Battery Hearn but I forgot to take a picture since I was in a hurry to return to the rendezvous point of my team.

Back at the road crossing, we discovered that a third of our map was missing, maybe due to other visitors might have seen the baloons and took them, made us lose time that we've never fully recovered back.

The map, using a spare map given by our guides, pointed us to Battery Way where our next clue hidden there showed the way to the duck-walk tunnel, not recommended for claustrophobic people, more like a culvert, where we literally walked like a duck or bend while walking, about 40 meters long, and has a sturdy wooden ladder at the end. It's inside this tunnel where we saw a tuko (gecko) up close where one of bigger guys among us, ironically, was so afraid of. 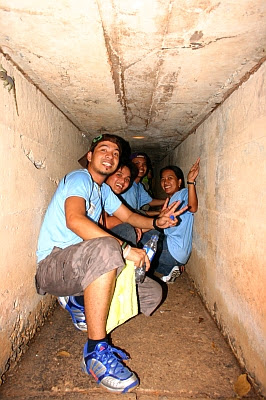 On exiting the tunnel, refreshing, cold bottles of water were handed to us and also next clues hanging on the surrounding trees.

This time, there was a detour where we had to choose among two activities that we like, that is if we still have a choice: Mark or Dark

The first two groups chose DARK, a more exciting trip by passing through the Batcave, an eerie undeground cave full of bats that come out late in the afternoon, something I wanted to do, plus the arduous uphill trek of three hundred steps that made their knees wobble.

We got MARK, no choice since we're on third place, an activity where we tried to hit targets using tennis balls shot by an improvised slingshot that we need to make five bullseye or thirty minutes whichever comes first. We finished this in thirteen minutes. The clue given at the end of the slingshot activity led us to the ruins of the old hospital where our next clue, actually a puzzle, was hidden; where ghosts of history dawned on me with the writings I saw on the wall of the dark and dreary place-- the Jabidah Massacre (of which I will blog one of these days).

On getting our next task, we're given a large bingo card where historical trivias about Corregidor were asked in each square and an acrostic, formed from the answers to the clues. This is where the knowledge of the tutubi in history came into useful existence since we were able to answer most of the questions.

Having deciphered the clue to the puzzle pointed to the Japanese Tunnel, I immediately told the team to hurry to the Eternal Flame of Freedom monument since I remembered a sign pointing to the entrance of the Japanese tunnel near the cliff. The tunnel about 40 meters long, also with laterals but not made of concrete like Malinta tunnel, with a cave entrance and exit at the other end is a ladder and rope. I also expected pythons, spiders and other scary yet interesting tenants of the place aside from ghostly imprints in my pictures inside but found none. 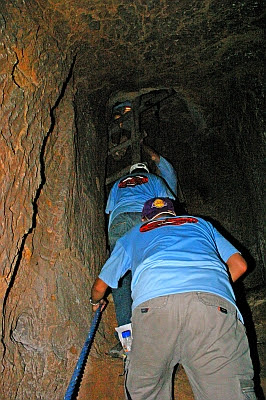 On seeing light at the end of the tunnel, we're tasked to eat pancit (Filipino noodle dish) with our bare, soiled hands since we drank all of our water. The next clue was actually hidden beneath the pancit wrapped in plastic and this time pointed to our pitstop: the old spanish lighthouse.

Inside the lighthouse were a couple of steps of spiral stairway and a ladder going up to the top. At the top, acrophobic guys among us suffered usual dizziness, and where we sang the Philippine national anthem at the top of our voices drowned out by the vast space around us, particularly with Mt Samat in Bataan as silent witness to our "heroic journey."

We only managed to secure third place for this Amazing Race but we earlier won the cheering competition part mocking other teams with the chant of the HAMPAS LUPA team!

These activities, even if physically demanding, were endured by senior employees with their medicine bags in tow.

Wow! what a great way to have team building.

and at the same time be able to appreciate the place too =) galeng!

team building is always a great experience. we learn a lot from it. the people who concocted the activities must be people of big ideas. i had team building exercises within the confines of my huge office, it would perhaps be a much better learning experience if it is conducted in places of pleasure and leisure.

Team building trips I had experienced in NY were mostly laid back with everyone pampered with scrumptious meals and first class accomodations. Otherwise, there'll be a courtesy meeting with the legal department just to go over my contract ... hehehe.

No doubt that was an awesome experience...
I wish I can join similar activities in the future held in a very interesting venue like you had...
Simply great experience!!!
Perfect!!!

do you conduct teambuildings? can i have a contact no.?

hi, thanks for connecting. Our team building model uses cooking as the catalyst. The purpose can vary from celebratory experiences to specific team focus issues. www.c3teambuilding.com. Logistically we're mobile, so we travel all over the country, and soon to be the world. We've done sessions from beach front, to in the client's office.

hi, thanks for connecting. Our team building model uses cooking as the catalyst. The purpose can vary from celebratory experiences to specific team focus issues. www.c3teambuilding.com. Logistically we're mobile, so we travel all over the country, and soon to be the world. We've done sessions from beach front, to in the client's office.

Team building is a great activity to improve the productivity of a team and build on their trust. Seems like that all members enjoyed and comfortable with each other. Thanks for sharing.

Would love to have such team building activities for our office! Could you please let me know how much it would cost to organize one?