Talk about the right place at the right time, Tutubi had a rare chance to hone his rusty photojournalism skills when he chanced upon the heavily-guarded launch of eSKWELA Project Launching in Quezon City. Knowing the right people, he was also able to secure a pass that allowed him to enter through an alley with numerous Presidential Security Group (PSG) personnel with their usual cynical looks. (One of them notived he brought along his camera that didn't have a security clerance from EOD-PSG so he had to proceed to the main entrance to have it checked and tagged.) 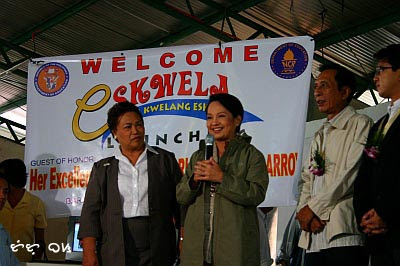 PGMA flanked by Cong. Bingbong Crisologo and QC Vice Mayor Herbert Bautista as Pres. Arroyo announced the launch of eSKWELA, something like e-learning badly needed in these islands called the Philippines to bridge deficits in education. 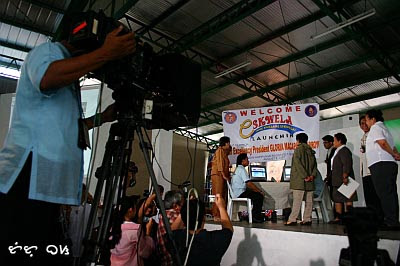 The president also announced the increase in P1B budget allocation for education, much needed to build more classrooms to service the bludgeoning population.

A demo of the Balik eSKWELA project with computers and multimedia was made to President Gloria Macapagal Arroyo under media frenzy typical of presidential sorties. 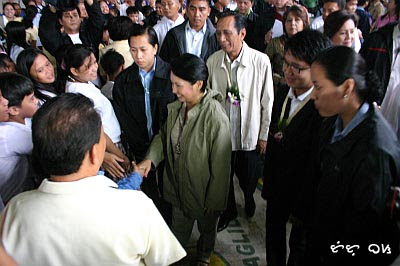 After the brief ceremony, the president went to the nearby baranggay chapel for a dialogue with officials of five barangays. (Tutubi wasn't able to follow since those PSG personnel informed him he can no longer go back there. Also that soldier needs to be re-trained on basic courtesy) 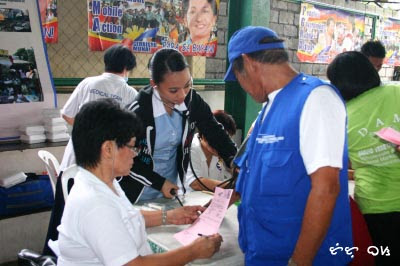 There was only a slight drizzle even of typhoon Chedeng was still in Batanes and Dodong's making his presence felt.

What's so unusual with the place was that the place lost its dugyot image and put on a false sense of kalinisan.

How I wish the president would pass by the place every single day so people would do away with the dugyot ways.

I've never tried photojournalism before; I bet it's hard to secure those passes.

photojournalism? wow! i hope the project will be successful :)

dugyut...havent heard that in a while. are you ilocano?

how did you do that - to be allowed so near? connections help a lot, do they? :-)

Hehehe... I guess we're all guilty of making things extra sparkly for guests... But to go as far as "dugyot"... I agree that she must visit often... or maybe until the idea of cleanliness is ingrained in the officials of the area.

I like how you refer to yourself in the third person. hehehe

This sounds like a very laudable project, when even out-of-school youth could still catch on and have their diplomas. I wish it would be succesful and become so widespread, towards down here in Mindanao. I believe that education is one process that could allow an individualt to capacitate himself or herself.

Wow! You were close to the chief !

kyels, photojournalism, besides travel photography, is what i love to do

iskoo, i'm not a pro-gma, but also not against her. when i see something good, she has my support

alternati, doing away with dugyot ways requires also the people to mend their ways.

so you noticed I shifted the way i write to the third person. I'm more comfortable to write like that, coming form a technical writer taking a plunge in blogging and sometime creative style.

major tom, manny pacquiao is one of those who benefited from this, btw

germs, indeed. just remember you gotta have the VIP pass plus the PSG-EOD (whatever that means) inspection tag for the camera.

sidney, too close for comfort, surrounded by lady bodyguards and shaked hands, even with me while my camera is held high