After the some delay in Tarlac due to a direction-challenged colleague, passed by miles and miles of roads dotted with bangus (milkfish) fisheries and where “Guilon Guilon” or harvesting of the world famous Bonuan bangus can be witnessed, Tutubi finally reached his destination for the day in Dagupan City, and checked it at Star Plaza Hotel strategically located on the banks of the river. (This could have been a good nightscape picture but it was raining for two nights) 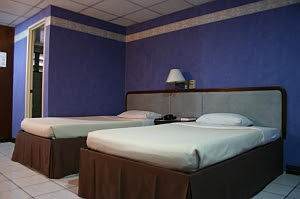 As expected when in this city famous for the tastiest variety of bangus (milkfish), the Philippines' national fish, breakfast served offered choices of longganisa (Filipino sausages), tocino (sweet marinated pork) and boneless bangus (in ordinary and spicy). Being not like the usual Filipino averse to hot and spicy food, Tutubi opted for the spicy one that isn't really spicy at all. The bangus is just basted with a mild chili sauce similar to tabasco and preferred to be de-boned due to its being bony. 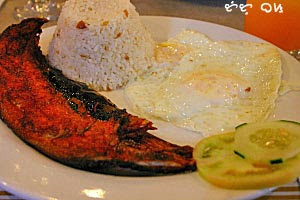 In the evening, the group had dinner at Matutina Restaurant in Bonuan, Dagupan where they feasted on various seafoods e.g. nilasing na hipon ("drunken" shrimp) and calamares (fried squid with batter), in a nice ambiance though quite expensive. 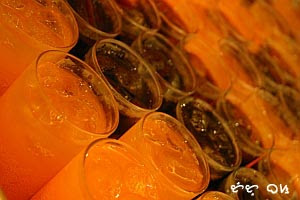 The following was the seminar where Tutubi was the last speaker (a slot he inherited due to resignation of one of his colleagues) and where his colleagues aver there were so many pretty Dagupeñas in attendance. In between breaks and meals, he washed down his thirst with soda, something he normally doesn't do these days.

Hurrying out of the hotel right after the seminar, made a quick pilgrimage to Our Lady of Manaoag in Manaog town before heading to another feast in another famous restaurant in Calasiao town: Dagupeña Restaurant in San Miguel, Calasiao. The restaurant, which was quaint and homey with capiz windows and kawai chairs, started out as an eatery in 1928 owned by Ignacia Bernal.

Interiors of Dagupeña Restaurant(below). Was only able to take pictures of this and not the food, again, due to fear of not being able to eat what's served. Highly recommend this restaurant for a sampling of Pangasinan cuisine aside from not being too pricey. 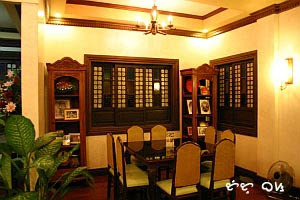 With tummies full, the group called it a night to rest while eagerly awaiting the following day's island-hopping adventure in Alaminos.

Note also one of the best boneless bangus available near Manila is at LZM Restaurant in Silang, Cavite on the old highway near Riviera Golf and Country Club.

How to get to Dagupan, Pangasinan

Commuting to Dagupan is easy. Several buses have terminals of Dagupan Bus, Victory Liner and Five Star. In Dagupan, you can take jeepneys and tricycles around the city.

Other information on Dagupan travel and tourist spots will be appreciated. Tutubi's planning an official return trip there soon.

this reminds me to post my long-delayed pangasinan entry ^^

I've never tasted Bangus before though I have heard and read about it. The breakfast looked good, seriously!

I am so craving for that bangsilog Tutubi! :) The Matutina Restaurant looks very quaint.

I loved daing na bangus! It's one of my favorites! Dagupan is very near Binalonan, home of Our Lady of Manaoag, but sadly I haven't been to Dagupan - YET!

Nice pics kabayan! And oh! Nakakagutom talaga! And I kid you not!

yummy travel, my kind. isnt it nice to try out different restaurants each time? my mother would not buy anything but bonuan bangus.

The hotel looks okay; the foods look great, it makes me want to go there and have some. I've only passed by Dagupan a couple of times when I was a kid, about 12 years old.

You sure had fun on your stay there.

Wow, my favorite talaga is Dagupan bangus..I've been to Pangasinan also in Vinmalley, it's a beautiful province..
Thanks for your travel stories :)

pieterbie, the better life is when there's no work and all play :)

anitokid, will post the manaoag part of the journey later

photo cache, but dagpunena is one of those i'd love to return to

mari, lots of fun even if we've very limited time

There's another restaurant in Dagupan which was featured by Jessica Soho, its Bahay Ni Tuna along De Venecia Hi-way. Imagine a tuna restaurant in the Bangus Capital of the Philippines.Its very affordable and very healthy pa!