The Quezon Memorial Shrine, a monument built in honor of Pres. Manuel L. Quezon, located inside the rotunda at the heart of the city named after the former president with "edifice complex," is a tallest landmark of Metro Manila's biggest city. 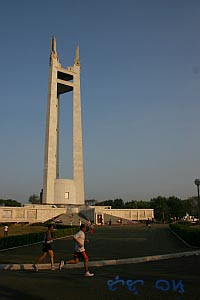 Many health buffs jog around the monument in the morning, others prefer to play badminton while a group dance their flabs away. During Eid al-Fitr, many Muslims congregate here to celebrate end of Ramadan.

Designed by architect Federico Ilustre
Height is 66 meters representing the age of Quezon when he died (of tuberculosis while in exile in the US during the 2nd World War)
3 pylons represent the Philippines' 3 island groups: Luzon, Visayas and Mindanao
3 Angels at the top of the pylons holding sampaguita garlands designed by Francesco Riccardo Monti (who also has works in Far Eastern University (FEU), University of Santo Tomas (UST), Metropolitan Theater, Don Bosco Technical Institute, Philippine Military Academy (PMA) and Sto. Domingo Church)

Inside the monument is a museum with old photos and memorabilias of the former president and his catafalque. His remains were transfered to the shrine from Manila North Cemetery. 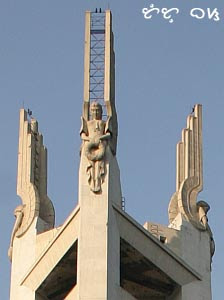 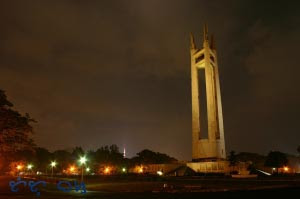 night picture of the monument

the circle is near Quezon City Hall 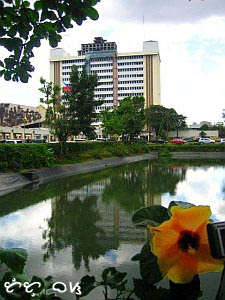 Quezon Memorial Museum is open to the public free of charge, Tuesdays to Saturdays, 8:30am to 5pm

How to get to Quezon Memorial Circle:

Jeepneys plying Fairview or Philcoa in Manila will pass by the place. Drop off in front of Quezon City hall and cross the circle going there (the pedestrian underpass will soon be completed) Buses on EDSA going to Fairview. The nearest MRT station is Quezon Avenue.

I did not visit this shrine; where is it located exactly?

Very interesting trivia. I didn't know that there are angels on top of the monument. Very nice.

It's a pity I did not get to visit this. There were opportunities, but lack of interest I guess prevented me from visiting it. Will do next time.

It looks like a perculiar monument to me. Pretty big, I guess.

What majestic architecture and how well you have capture these monuments - thanks for sharing!

I wish you a great week ahead and welcome over if you like to get into a romantic mood :-)

kyels. it's in Qusezon city, north of Manila. i posted info on how to go there. but if you're coming here, let me know. i can show you around :)

niceheart, those angels are really not visible from afar.

peiterbie, a monument to our former president with "edifice complex" :)

rennyba, thanks. had a great weekend indeed

Hmm. Brings back good memories. When I was still working in Manila, I lived in UP Village which is just a couple of blocks from QC Circle. So I almost see that structure everyday for about two years. The irony is, I never really got the chance to roam around the place. Ah, little things I regret.

learned them from a school field trip waaaaayyyyy back so thanks a lot for posting this. i've forgetten it already =)

btw, have you tried crossing the elliptical road from commonwealth? scary. it's a good thing they already build that pedestrian underpass. =)

Nice pics and very educational for me who has to make up for lost time to see these important landmarks :)

...my former abode...
This was just a walking distance from our rented house in Project VI when I was still working in travel agency.
Thanx for sharing the trivia. It is actually the most important part in this post :)

we saw this when we checked out the Durian Festival being held at the grounds.
sayang, the museum was closed nga lang that day. maybe because it was a sunday.
i took several photos of the monument... sana lang they were half as great as your shots man lang... ;-)

Nice pictures and trivia. I'm glad you're able to write about the shrine. It really deserves more publicity.

Your blog really looks nice (it doesn't look like it's hosted by blogspot). :)

I have long been a resident of QC and never knew that Quezo's remains are buried there. Shame, tsk, tsk. Anyway, do you know where they bought the new artificial trees surrounding the memorial? They're real attractive when one drives by at night.

ashley, no idea about the trees. have yet to notice them. i also prefer real trees for they really breathe :P

brought my grand daughter here last time I visited Pinas and she loved playing in the inflared playground. There are also bikes and trikes for sale and Tai Chi lesson. There are several restaurants on site and I love Kamameshi with their steamed rice. I remember during the early 90's there are cultural shows presented every Sunday. I wonder if it's still being done.