Commonly and erroneously called water lily in the Philippines even by mainstream media, water hyacinths were originally from South America and introduced in many parts of the world. Pasig River and Laguna de Bay are local prime examples of the havoc caused by the aquatic plants in clogging waterways, choking oxygen from the water (similar to Kiapo) and breeding of mosquitoes.

There is beauty, however, hidden from most people unfamiliar with the plant. 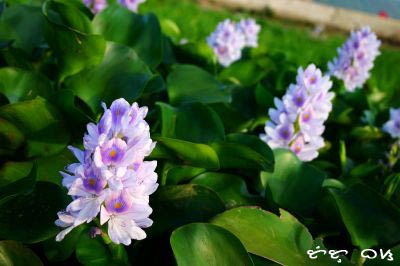 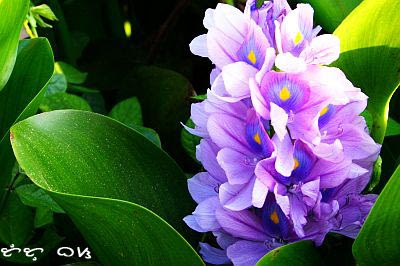 How beautiful and colorful its flowers are. Beauty in spite of its destructive presence.

Tutubi has seen water hyacinths used in waste water treatment, others claim the plant's high nitrogen content make it a potential biogass source. The most succesful use of the plant, however, is the use of its fibrous stem as handicraft materials for bags, mats, and slippers (like the ones in Las Pinas City, where the erroneously called "Water Lily Festival" is celebrated in July)

There is a Hyacinth in Greek mythology from whom the pretty hyacinth flower is named after. The bataw, of Bahay Kubo fame, in English is hyacinth bean.

Kiapo: where Quiapo Got its Name

Aah, pretty flowers of the lily. I used to live near the Pasig River-it bordered my backyard-and since I see this plant daily when I was a kid, I never realized there's beauty in them. Baby shrimps love to cling on their root and we'd get them for bait.

Thanks for posting these lovely pictures.

I know very little of flowers and plants, but this is a pretty one.

A beautiful kind of flow indeed. It's hard to spot water lilies here though.

Didn't know it's harmful. I always see this stuff floating in Pasig River everytime I would walk crossing the Guadalupe Bridge (called "Tulay" in EDSA). And yes, I have heard it's a good source of biogas. I think I read it from Manila Bulletin sometime ago :)

I thought that their reason for being in the Pasig and Marikina Rivers is that they are helping control pollution in the waters. So they are actually doing more harm than good? Hmmm.

pieterbie, pretty one but destructive if there are too many of them

kyels, here in pinas, some lakes and waterways are clogged up with one of the fastest growing plants there is

dodong, they're harmful if there are too many lalo na pag barado na daan. sa laguna they control them by tying them together so they look like green islands from afar

watson, sometimes they're really used for wastewater treatment due to their ability to survive in polluted environments. destructive of they're too many plus they choke the water of oxygen and obstruct sunlight

Never saw them with flowers...:-(
Why don't they try to destroy some of them if they are harmful. There are lots of them in the Pasig River and Laguna de Bay.

what a beauty! we have so many exotic plants in pinas ... too bad I didn't know how to admire them when I was growing up ... but now I do!

thess, favorite flower?hemust've been living in a place full of them.

sidney,destrying them ain't easy.even someUS lakes and rivers are choked by themfor they nultiply so fast. but converting them to biogassholdsmuch promise if they're fast growers-- highly renewable energy

lino, thanks for dropping by again

bebang, that'sbe great but i'm already booked on dec 8. is there another sked with the gangsters?

nance, many plants indeed butunappreciated. thanks

these pests are the cause of flooding of cotabato city indeed, clogging rio grande de mindanao