Christmas in the Philippines

Filipinos' Christmas celebration is reputedly the longest in the world when, come the first day of September the "ber" months of the calendar starts, some radio stations start playing Christmas carols. This will continue until a few days before November when Halloween, All Saints Day and All Souls Day triumvirate will rule but immediately revert to Christmas-themed decorations.

As early as October, shoppers already looking for gift ideas to avoid the Christmas rush. Come December, malls, of which the Philippines has so many of, will be filled up with people that locals describe as "di mahulugan ng karayom (can't drop a needle)."

In Metro Manila, traffic will change from bad to worst particularly areas near shopping malls, bazaars and "tiangge," Divisoria with the stretch of Recto from Avenida transformed into pedestrian-only street swarmed with thousands of shoppers looking for big bargains, off-line ATMs will be commonplace due to low supply of cash particularly on the 15th of December (payday) and release of the mandatory 13th month pay and Christmas bonuses. Taxis will be very hard to flag down due to heavy traffic and volume of passengers.

Many parol, the Filipino version of Christmas lanterns, start to light up places while Christmas trees start to be visible including the traditional large one in Araneta Center, Cubao plus the mechatronic show at COD Cubao now transferred to Greenhills Shopping Center. Buildings in Makati start to display the belen (nativity scene) while Ayala Avenue will sparkle with Christmas lights like stars a-twinkling. 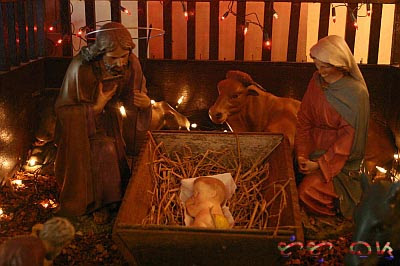 the belen a typical nativity scene displayed in houses and buidlings

Company activities include doing some sort of charity work by visiting orphanages, home for the aged then the company Christmas party will ensue with the ubiquitous raffle prizes awaited by attendees. Employees start receiving gifts from officemates, vendors, suppliers and other contacts.

At night, children and people will start caroling with children singing a capella or accompanied with improvised drums and maracas made from soda and beer crowns. Older people usually bring a guitar or a portable keyboard. (Tutubi during childhood brought an accordion played by his musically-gifted cousins). Street children would be oblivious to the danger of passing cars and jeepneys and serenade commuters and drivers trapped in traffic for loose change.

On December 16 up to the 24th, a unique Filipino tradition called "simbang gabi" will start with dawn masses for nine days before Christmas day. Churchgoers, still sleepy after mass, will eat or buy food at eateries (turo-turo or carinderia) selling puto bumbong, bibingka, goto/lugaw/arroz caldo (porridge) and other kakanin (sweet delicacies) associated with the holidays.

On Christmas eve, people will flock again to church for the midnight mass, usually 11pm where short plays narrating the flight of Joseph and Mary will be re-enacted. A sumptuous feast, called noche buena, the traditional Christmas eve dinner of Filipinos, will follow and won't be complete without the traditional queso de bola (cheese ball wrapped in red wax) and ham (any will do from cheap ones from the supermarket to popular Adelina's ham (kalentong) or Majestic)

New Year's eve in the Philippines is celebrated with a midnight mass then a traditional dinner called media noche amidst the noise and spectacle of firecrackers and fireworks to welcome the new year.

The Christmas spirit doesn't end there, the usual shopping and traffic will continue up to New Years Day when visits not performed on Christmas will be made on New Years day.

The end of Christmas celebration is now tagged at the feast of the Three Kings (Epiphany) on January 6 though some mark the day on the Sunday after the first Saturday of January.

Filipinos celebrating Christmas is long and unique though Tutubi prefers to go back to the true spirit of Christmas sans commercialization and lavish spending on "bago sa pasko (new for Christmas)."

There won't be updates here for a few days for Tutubi will celebrate with family in his hometown.

This post makes me miss Christmas in the Philippines... the caroling, the Noche Buena... especially the family.

Definitely one thing I don't miss... the traffic. :)

Maligayang Pasko at Manigong Bagong Taon! Have a great celebration ahead!

My god, sounds like all year Christmas.
Have yourself a merry one!

Happy Christmas and a very productive and lucrative new year.

kyels, bw, pieterbie, phto cache, merry christmas to all of you

you're right. christmas is really a big and long celebration here. and the malls being really crowded even if there are hundreds of malls. haaay...

Thanks for this lovely, readable and very informative post. You know, coming from Norway and with different Xmas traditions, I just love to read about yours!

Wishing you and your family A Merry Christmas and are looking forward to the updates.

wishing you a merry christmas from the bottom of meow heart. mwahhhh

There's no Christmas like our Christmas back home. It has the spirit with all the young ones waiting for that day to get their "regalo" from their "ninongs" or "ninangs"; the carolings and the smell of apples and oranges at the sidewalk on the days before. I truly miss Christmas in the Philippines.

maayong pasko ug bulahang bag-ong tuig tutubi. unfortunately, i was not home for xmas. pero i'll be with my family this new year.

Hay! advance Merry Christmas to all and i so excited in this occasion,because i really appreciate what's the deepest meaning of Christmas here in the Philippines.