I don't need to state here that it's Jose Rizal day. I can only say I'm home again in Paete.

Let me share these two photos I took from my recent "11 hour unplanned" trip: 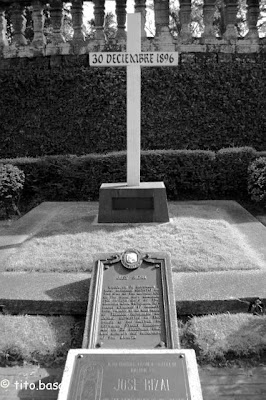 The Spaniards furtively buried JR in this unmarked grave without proper Christian rites. It was Rizal's sister, Narcisa, who searched for a freshly dug grave in Manila and found this one with guards stationed at the gate and beside the unmarked grave. Narcisa gave gifts to the guards and marked the grave RPJ.

A heated debate on Rizal's retraction continues up to this day. 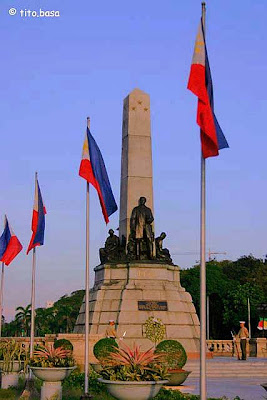 It was only during the time of the American colonizers, who installed Jose Rizal as national hero allegedly for his pacifist views, that Rizals remains were transferred to the present Rizal Monument.

How to get to Paco Park, Manila:

Driving Directions: the park is at the corner of Padre Faura St and San Marcelino. Note San Marcelino is a one-way street. The best access route is via UN Avenue coming from Taft Avenue or Nagtahan Bridge.

"The day on which you would see me in the clutches of the friars, do not waste time making petitions or uttering complaints or lamentations — it is useless. Try to put another in my place who may avenge me and make them pay dearly for my misfortune! If I would see a son of mine in the mouth of a shark, I would not try to pull him out — for it is useless and all I would achieve is to destroy him — I would KILL the shark if possible, and if not, I would WAYLAY him!

Well then, suppose that the friars are either sharks or only mudfish. If they are the first, THEY MUST BE KILLED; if they are the second, they should not be feared. I rather think they are mudfish and so I am not afraid to fall into their hands. They have to be very many, in order to finish me, and even then they would have to pay for it! With these imprisonments and these vexations the exceedingly soft skin of our countrymen is hardened. Some will fall and desert, it does not matter; others perhaps will hold firm. Life is so pleasant and it is so repugnant to die hanged young and with ideas in the head.

If these ideas seem to you acceptable, communicate them to our countrymen there so that they may show more valor, more abnegation, less fear of death and torture, so as to make our enemies respect us. If they should be banished, better; on the island where they may be sent they communicate their ideas to the people there and they make propaganda. While in prison, they may meditate, like Regidor, on plans of revenge. If they should be hanged, they may be supposed to have died of the sickness of friarous or friarophobia. WE SHALL AVENGE THEM them and with their blood mark our enemies!""

"When the people is gagged; when its dignity, honor, and all its liberties are trampled; when it no longer has any legal recourse against the tyranny of its oppressors; when its complaints, petitions, and groans are not attended to; when it is not permitted even to weep; when even the last hope is wrested from its heart; then..! then..! then..! it has left no other remedy but to take down with delirious hand from the infernal altars the BLOODY and SUICIDAL DAGGER of REVOLUTION!!!"

"Oh I tell you that our Catholic religion is no longer a religion of God; no I DENY IT! God ought not to be responsible for such a religion!"


“I am readying myself for death. I am making arrangements for what I will leave behind and am preparing myself for any eventuality; Laong Laan is my real name. That is why I wish to finish the second volume of Noli at any cost and if it is possible, I do not wish to leave what I have begun without anyone to continue it…

May our compatriots there obey the voice of their heart and devote the precious time of their youth to something great, which is worthy of them. We do not have the good luck of other young men who can dispose of their time and their future.

We have upon as A DUTY; TO REDEEM OUR MOTHER FROM HER CAPTIVITY; our mother is pawned; WE MUST REDEEM HER before we amuse ourselves!”


In the beautiful East
Where the sun rises,
A fair land
Resplendent with charms
In heavy chains
The despot keeps.

Alas!’ tis my country,
The country I love.

Like a slave she is dying,
In irons languishing:

Oh, happy man he
Who could LIBERATE  her!

"It is a grievous consequence of hatred of the friars that my aged mother, who was so devout and pious, now does not want to believe any more. She says that everything is deceit, the friars have neither faith nor religion. She wants to believe only in God and the Virgin Mary, and nothing more. And like my aged mother so are my sisters, and like them are many women of the Philippines. Look, Spain, look, Catholicism, at the immediate consequence of your policy!"


“Man should die for his duties and his convictions. I uphold all the  ideas that I have professed  about the state and the future of my country.  I will gladly die for her and do even more to attain justice and peace for you… What is death if one dies for what one love loves, if one dies for the country and for the people that one loves?...

I have always loved my poor country and I am sure that I will love her till the very end, even if men have been unjust to me… Whatever my fate maybe,  I will die glorifying and DESIRING THE DAWN OF HER REDEMPTION.

Let these lines be published after my death.”

“We are children, we are the latestborn. But our hearts beats high, and tomorrow we shall be full-grown men who will know how to defend their hearts and homes. We are children, yes but nothing daunts us, neither wave nor storm or thunder. With strong right arm and unclouded brow WE SHALL KNOW HOW TO FIGHT IN THE HOUR OF DANGER. Our hands shall take up in turn those instruments of sovereign reason, the SWORD the pen, the SPADE!”