This day, December 30, 2007, is the 111th death anniversary of the Philippine national hero, Jose Rizal, who was condemned to die by musketry by the abusive Spanish friars of his day.

The Philippines lost a genius that fateful morning, but the very same day 111 years ago, one of the largest eagles in the world, found only in the Philippines, was baptized and given a name: Pithecophaga Jefferyi. This was published officially by the British Ornithologists Club in London on December 30, 1896.

That eagle, then called monkey eating eagle, is now known as the great Philippine Eagle... 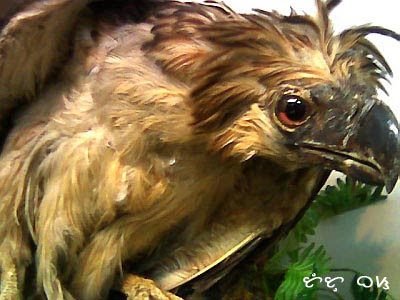 John Whitehead discovered the large raptor in the island of Samar in 1896.

In a country where no tigers, lions or leopards roam as predators, the mighty raptor rules as king that's why it's called Haribon, short for Haring Ibon (Bird King) and looks down on the world with its unique blue-gray colored eyes, while soaring with an awe-inspiring wingspan of two meters.

The Philippine Eagle can only be found in rainforests of four major Philippine islands: Luzon, Samar, Leyte and Mindanao.

The Philippine Eagle was featured in the Flora and Fauna series coins of then Central Bank of the Philippines on the reverse side of the 50 centavo coin.

Similar to the fairly recent printing error of the P100 bill Arrovo instead of Arroyo (Tutubi has a specimen of this), in 1983, the scientific name of the Philippine eagle was erroneously minted as Pithecobhaga jefferyi instead of Pithecophaga jefferyi. Coins and bills like these are instant collectibles by numismatists!

The Philippine eagle is one of the world’s three largest eagles besides the harpy eagle of South America and Steller’s sea eagle.

Charles Lindberg, most famous as the first aviator to cross the Atlantic in 1927, as a representative of the World Wildlife Fund (WWF), visited the country in the 1960s and called the Philippine eagle as "the world's noblest of fliers."

It's estimated that only 600 pairs remain in the wild.

Philippine Eagle Center in Davao, operated by the Philippine Eagle Foundation (PEF), is trying to save the endangered Philippine Eagle where in 1992, the first eagle hatched using artificial insemination gave birth to eaglets named Pagasa (Hope) and Pagkakaisa (Unity).

The 21st PEF-bred eagle was adopted by paint manufacturer Boysen and christened Pin-Pin, short for Pinturang Pinoy (Filipino paint). Boysen also replaced the American bald eagle with the Philippine eagle on its logo.

In April 2005, Kabayan, an eagle adopted by Philippine Vice-President "Kabayan" Noli de Castro, the first captive-bred eagle released in Asia, was electrocuted and died in Mount Apo Natural Park after nine months in the wild.

Formerly called monkey-eating eagle, since it thought to eat only monkeys, it was later named Philippine Eagle and designated as the national bird of the Philippines to promote awareness of its importance and sad plight.

The most recently-hatched eagle, the 22nd PEF-bred, still has no foster parents. (Are you to the challenge? To adopt it, inquire at the official website of PEF here)

How to go to Philippine Eagle Center, Davao:

According to PEF official website, "The Philippine Eagle Center (PEC) is about an hour drive from the city and can be reached either by private or public transport. Buses going to Calinan depart every 15 minutes from the Annil Terminal located at corner Quirino and San Pedro Extension. Bus fare is at P30. From Calinan, take a pedicab going to the PEC. The ride is about 10 minutes and will cost you P6. Before entering the PEC premises, the Davao City Water District will collect an entrance fee of P5 for adults and P3 for kids. PEC entrance costs P50 for adults and P30 for youth, 18 years old and below. Tour guiding and the use of kiosks are free of charge."

happy new year, may it be a prosperous one.

Good of you to honor José Protacio Mercado Rizal Alonso y Realonda I think. He was one of those unique people who stayed true to what he believed in, a hero.
We can learn from people like that.

oh wow! how can i be so dumb! i completely forgot about rizal day! and i owe my freedom to the forefathers... :(

Yes, I've heard about the centre in Davao; sounds really interesting. One day I shall visit the place. Anyway, interesting information you have about the Philippine Eagle.

meow tutubi, thanks for the photos you've share with us, nice knowing you thru blog, hopefully we'll get to meet you in person =) may this new year adorn your life with many beautiful things and sweet memories to cherish forever. Wishing you life’s best this 2008!

What a very informative entry!Thanks for sharing them to us tutubi! Wishing you & your family a very prosperous New Year!

photo cache, same to you. have a blessed new year

pieterbie, glad to know you knew of rizal. to tell the truth, only a few filipinos can recite his full name like you did

kyels, i've been to davao but not yet tothe eagle center. intend tovisit it someday

Wishing you happiness and prosperity in 2008. Happy New Year Tutubi.