So much has been posted and written on this unique structure, so many cameras clicked their shutters to capture the beauty that is San Sebastian Church, officially called Basilica Minore de San Sebastian, one of the Philippines' minor basilicas but many of them still doubt one thing: that the structure shares something in common with the famous tower in Paris as well the precursor of Ayala Bridge. 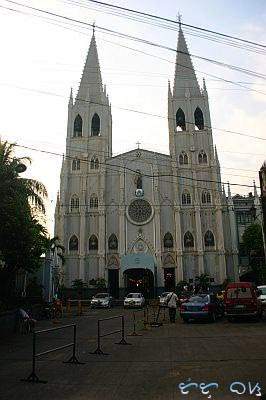 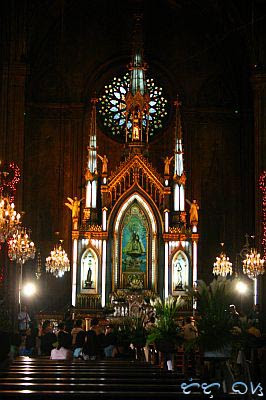 the lit up altar with a wedding taking place. It's such a popular wedding venue 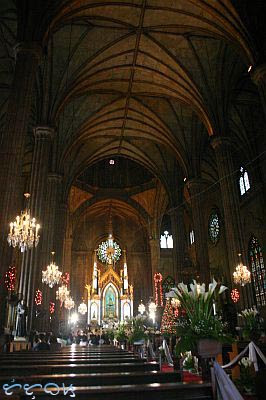 the dark interiors,taken without a tripod and a canon kitlens. The huge columns and interiors were made to look like marble but actually made of steel to make the structure resistant to earthquakes 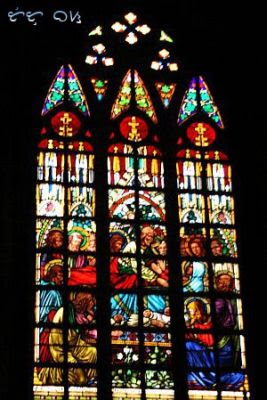 Stained glass windows were made by Germans 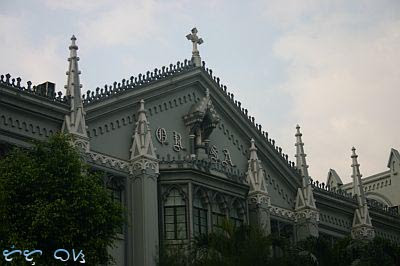 Gothic look of the adjacent building part of Baste, colloquial term of students of the College of San Sebastian 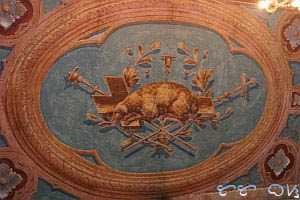 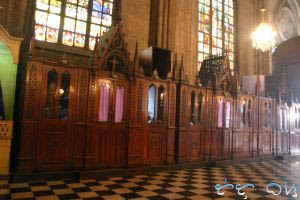 even the confessionals sported the Gothic look but designed by Filipinos

San Sebastian was elevated to the status of a minor basilica by Pope Leo XIII in 1890.

On the claim of Gustave Eiffel link, according to noted scholar and pop historian Ambeth Ocampo, San Sebastian Church was "bought from the Eiffel company. the handful of bridges--like the ayala bridge--built at the tail end of the Spanish period, were called "puente Eiffel." In Eiffels' list of work there is mention of an all steel-church in Manila...what else is that but San Sebastian?"

There you go, friends, who still insist there's no link between Eiffel and San Sebastian Church.

The basilica is a declared National Historical Landmark and tentatively listed as a UNESCO World Heritage Site due to its heritage and historic value.

Basilica Minore de San Sebastian-- commissioned by the Spaniards, structure designed by a French, constructed by Belgians, stained glass windows by Germans, interiors by Filipinos--a heritage landmark in the Philippines!

You may refer to Tutubi's post on Grand Bridges of Pasig River for Philippine history link with the famous builder of world-renowned Eiffel Tower in Paris, France.

How to get to San Sebastian Church, Quiapo, Manila

Commute: MRT Shaw Blvd Station or Pasig Shaw Blvd, Quiapo-bound jeepneys pass by Legarda, cross Recto and Mendiola. Drop off on the first road after Recto i.e. San Rafael from where the Basilica can be seen with its spire towering over Plaza del Carmen.

From LRT Doroteo Jose Station, board a jeep bound for Sta Mesa on C.M. Recto. Alight before reaching Mendiola then walk towards Ayala Bridge then turn right on San Rafael St.

From Quiapo, Jeeps bound for San Miguel, Pasig, Bacood, Punta, Cubao (via Sta. Mesa) all pass near the place. Be careful with Lealtad and Balic-balic-bound jeeps. Not all of them pass Plaza del Carmen, only those with Bustillos signboards do.

By Car: from Makati, make your way to Ayala Bridge drive past P. Casal then make a left turn at the corner of San Rafael St (the church's spire is too visible not to be seen)

By Car from Quezon City, the easiest route is via C3 then Ramon Magsaysay heading to Nagtahan. Take J.P. Laurel St instead of Legarda to avoid usual heavy traffic, at the fork, choose right Concepcion Aguila then right turn to Mendiola, left to Legarda then right San Rafael St.

San Sebastian is also the model of the Cathedral of Puerto Princesa. Of a much smaller scale though.

did you try to go up the bell tower?

That Church wass so memorable to me because it provided solace when I was stressed out. I took my law review class in Baste in 2006 and I happen to pass that Church at the back of Baste almost everyday. Thank you for posting this. It brought back very good memories.

carlotta, nope. ferdz and I only met there, took a few pictures and left for san miguel...

lawstude, aha,so Baste is it for youlikemany students there use it as a term of endearment

Wow, this can obviously rival the many old churches I see here in England! Very majestic!

My favorite church in the Philippines. Given that it was build by Belgians I have no other choice... ;-)

I am happy you got your facts right. Ever since Ambeth Ocampo claimed it was designed by Eiffel everybody seems to believe this hoax.

gypsy,i would love to those cathedrals there in the UK

sidney, been communicating with ambeth these days.and oh, i just wish the builders coated the church with belgian choco :P