A text message from Ferdz on a Friday night asking for information on San Miguel, Manila, the row millionaires, the seat of power in the Philippines that is Malacanang Palace and the birthplace of eponymous beer: San Miguel Beer, took shape with Tutubi accompanying Ironwulf on a photo shoot on the streets of San Miguel district of Manila.

Tutubi, accompanied by J who joined also on a moments notice, waited for Ferdz at San Sebastian Church in Quiapo, took a few pictures of the all steel church then walked towards Legarda St and Mendiola to San Beda College's Abbey of Our Lady of Montserrat by the Benedictine monks. The abbey was closed but the attendant let the group in for picture taking of the dark abbey. 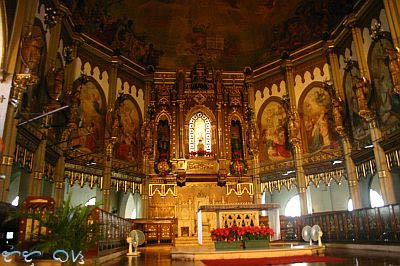 picture of Abbey of Montserrat dark interiors, what more with the lights on? Tutubi, as usual, was too lazy to bring a tripod, only Ferdz did :P

A few meters away entered another world that seemed not to belong to the Manila most people know where grand mansions stood, caught sight of La Cocina de Tita Moning, a fine dining restaurant tucked away in the hidden enclave that is not part of Tutubi's radar screen due to the pricey menu. (Only Ferdz was audacious enough to take pictures of the American era mansions and majestic homes since Tutubi saw guards from a distance in this highly-secured environs)

At the end of San Rafael corner J.P. Laurel St. is a memorial, called Freedom Park, to the victims of the Battle for the Liberation of Manila during the second World War honoring the dead. The memorial is an obelisk about ten meters tall with a dove perched on top.

They turned right as the logical choice since the cynical guards guarding the official residence of the iron lady were watching. This is such a disappointment since the place is so picturesque and should belong to the Filipino people.

On reaching San Miguel Church, a church that was the temporary seat of the Archdiocese of Manila when the Manila Cathedral was bombed to smithereens during World War 2, a wedding was taking place so proceeded only to take pictures of the facade and the bronze statue of St. Michael the Archangel. 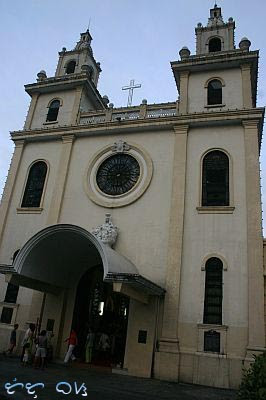 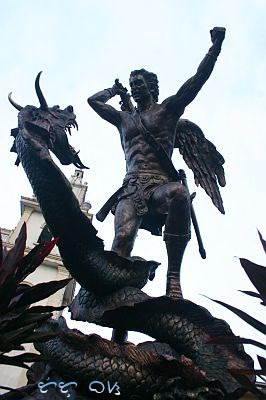 The bronze sculpture of St. Michael slaying the serpent-devil in front of San Miguel Church

Since it was getting dark, they decided to call it day, boarded a jeepney bound for Quiapo, walked J to the terminal of Lealtad-bound jeepneys on Hidalgo St, took Lacson underpass to Plaza Miranda then to the vendor-filled Hidalgo Photographer's Haven, unto SM Sta Cruz, Isetann and LRT Carriedo Station fora ride back to Makati via MRT.


If you want a guided tour of San Miguel, you may get in touch with Ivan ManDy. You will be surprised to learn about the history of the secluded place as well sample the menu of La Cocina de Tita Moning.

See another DIY walking tour of Tutubi and Ferdz tandem:

How to get to San Miguel, Manila

In Quiapo, near the area under Quezon Bridge, the Quiapo-San Miguel jeepneys pass by Arlegui St then Globo de Oro (where the Golden Mosque is) going to San Miguel. The jeep loops through San Miguel even in front of San Miguel Church.

From LRT Doroteo Jose Station, board jeepneys going to Cubao (via Sta Mesa) on C.M. Recto and alight on Mendiola (when you see barbed wires, it's Mendiola)

Directions by car from Makati, make your way to Ayala Bridge, on reaching P. Casal, turn right to Arlegui St. where you can also pass by San Miguel Church looping through Alfonso St.

ive just been to ironwulf's site... kakainggit naman fotos nyo... walang itulak kabigin. they are all amazing! thanks for always sharing them with us.

btw i also rode the pasig river ferry last week, di tayo nagkita! posted some of the photos already in my blog :)

Yep, I saw Ferdz's post about this too. Glad that you guys had fun!

Tutubi, I plan to retire in Manila after working as a truck driver in the US for 15 yrs. I've seen all of the USA and parts of Canada, but not all of Pinas. Once I got settled, sometime March or April, I would like to join you in any of your photo shoot or entertaining guests. I also want to relearn my past hobby of Photography, but now in digital. TNX

itchie, i do walking tours by myself out of whim and i sometimes contact some friends to come with me...just keep in touch and probably we'll see something

tin-tin, i guess i don't have to reply to your question on how to get to St. Jude church :P

In case you decide to do a walking tour again, you might wanna drop by Casa Roces. It's a new resto/cafe/events place infront of Malacanan Palace.