What was initially planned by Tutubi as a return visit to Kamay ni Hesus in Lucban, Quezon and a sidetrip to Kamayan sa Palaisdaan Tayabas also in Quezon turned out into a visit to Calumpang, Laguna to get some lanzones/langsat, coffee seedlings and other herbs including basil (that Tutubi initially thought was taheebo) then a quick drive towards Bay town, famous for monay (local buns), caught sight of Victoria's "mighty duck," into the sister restaurant of Kamayan sa Palaisdaan in Tayabas, Quezon.

It was already nearing 12 noon and good thing they arrived a tad early for, after a while, all the huts were occupied and some waited for vacancies not wanting to dine in the place's usual restaurant preferring the floating bahay kubo ambiance. 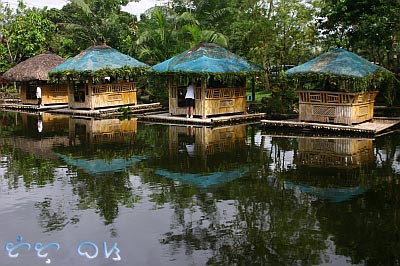 picture of floating native huts near the entrance 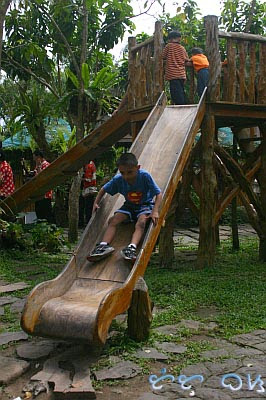 childrens' playground even for the young at heart 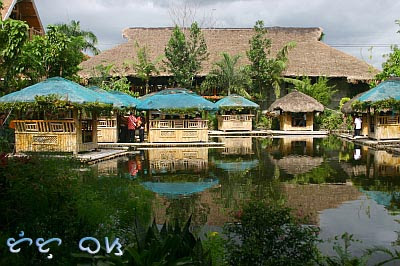 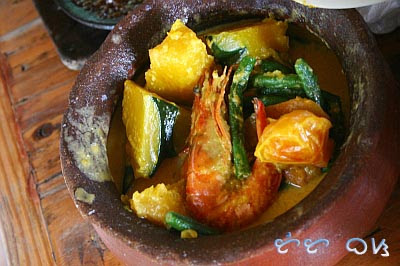 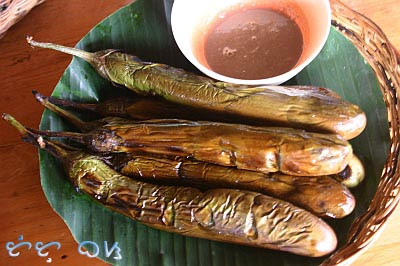 inihaw na talong with bagoong (roasted eggplant with fish sauce (that stinks to most people yet tastes heavenly to some) (price: P35/order) 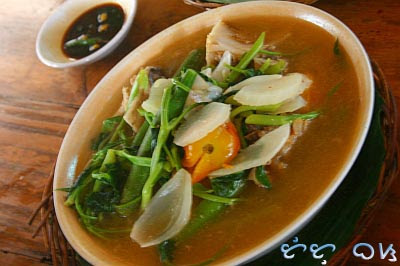 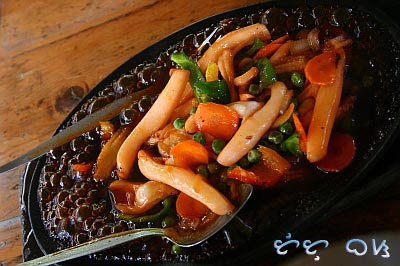 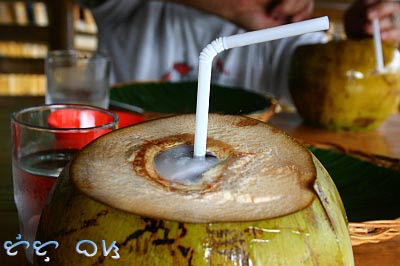 The total bill for 5 people was only P1,050.00, not bad for the great food, rustic ambiance and picturesque place about 40 minutes drive from Paete.

It's another unplanned trip that turned out great. Next time, Tutubi will visit the original one in Tayabas reportedly owned by a sibling of the owner of this restaurant...stay tuned!

How to go to Kamayan sa Palaisdaan sa Bay:

Commute:the floating restaurants can be reached only via tricycle from Bay town. Not yet sure if the jeepneys that ply Calamba-Sta Cruz route pass by it.Green Star and HM Tranport buses from Pasay and Cubao pass by Bay, Laguna.

If you've strayed into blog looking for directions to Calumpang, Laguna, it's a town accessible via Laguna's capital town of Sta. Cruz. Driving from SLEX, take Calamba exit then turn right at Calamba national highway, head straight passing by the resort town of Los Banos, then Bay (you'll see Kamayan sa Palaisdaan on the highway to your right) soon after you'll see the big duck of Victoria, the heritage town of Pila with its old houses and historic plaza, before Sta. Cruz. After passing by SunStar Mall you'll see a traffic light. Turn right if you want to go to Calumpang or Liliw, turn left going to Sta Cruz poblacion or Laguna Provincial Capitol or straight ahead going to Pagsanjan (where Pagsanjan Falls is), Lumban, Kalayaan or Paete.

I've been to the one in Tayabas. Meron din pala sa Laguna. Palaisdaan is really world class. Yet the prices remain reasonable.

Oh wow! I love those huts! Nice, nice place. Would love to go there myself! :)

bw, didn't order inihaw na tilapia there since it's cheaper at home. recommend catching your own tilapia and have it cooked

Hey, I could have enjoyed that.
Love those floating huts.

Thanks for visiting Pedestrian Observer and commenting on "WEG, Boom or Doom on RP Tourism?" article I posted.

Philippines is a nice tourist destination and have a lot to offer like what you posted here but if the government bureaucrats and policy makers don't do anything regarding contentious issues we are losing out.

If I may request you and make an appeal to your readers and other bloggers promoting RP tourism to help us call the attention of lawmakers to scrap or at least re-examine these silly rules & regulations then we are able to help boost tourism in the country.

If you happen to go to Tarlac, meron sila similar na resto called Isdaan. I was there last week and I'll post it in my blog soon.

i wish i could visit there too! i love those huts! :)

Galing ka nga pala ng Paete! We're planning a trek this weekend. It's either Magdapiao Falls in Cavinti, Laguna, or Matabungka Falls in Paete, Rizal. Or, it might be another destination altogether!

pieterbie, you can also catch your own fish there mainly tilapia, mudfish and catfish (notthe koi) and ask them to cook for you

politicaljaywalker, willpost about it one of these days since it's really a concern for me...us

lawstude, my favorite actually. for dinner just tonight i had ginataang hipon again with pineapples though i prefer it with kamias the way my father cooks it

watson, so you know the alternate trek to magdapio w/o shooting the rapids? haven't been to pagsanjan falls myself since i find it too touristy and i used to row my own boat that's why i;m not thrilled :P

I want the sinigang and ginataang hipon! You make me hungry Tutubi; I envy you naman!

....Yes, the jeepneys that ply calamba-sta cruz pass by this restaurant.

my mom choose this venue for my birthday celebration next month,my fiance will come here and itl be double celebration!

I will recommend this restaurant to my Irish boyfriend

Good am. Are you open today, Good Friday?