Mahatma Gandhi: The Father of India at Mani Bhavan, Mumbai

This day in 1948, only months after India gained independence, Mohandas Gandhi died when an assassin, a Hindu named Nathuram Godse, angered by Gandhi's benevolence towards Muslims and betrayed the Hindu cause, shot him point blank in New Delhi. 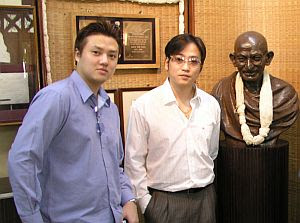 Mohandas K. Gandhi was quoted to have said "If I am to die by the bullet of a mad man, I must do so smiling. There must be no anger within me. God must be in my heart and on my lips." This was on January 28, 1948, two days prior to his assassination.

During Tutubi's 3 weeks working, living in India in April 2004, he was able to visit Mumbai's Mani Bhavan museum near Malabar Hill, where Gandhi had lived while visiting the city and was the focal point of his political activities. (Picture of Gandhi bust at Mani Bahvan with Tutubi's two Korean friends)

At Madame Tussauds Hong Kong, Mahatma Gandhi is honored by a wax figure on display. 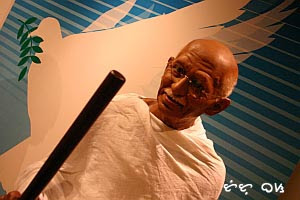 This day, ashes of the great leader were scattered on the shores of Mumbai on the Arabian Sea, sixty years after his death.

Tutubi honors great people of history who gave their lives for the good of others!

According to the official website of Mani Bhavan, "Mahatma Gandhi lived in this quaint Gujarati-style house from 1917 to 1934, and it was here in November 1921 that he conducted a 4-day fast in order to restore peace to the city. This quiet three-story home on a beautiful Laburnum tree-lined avenue now preserves the spirit of the man who selflessly put his nation before himself. There's a library of Gandhi-related works, as well as displays of photographs, posters, slogans, and other items that document and explain Gandhi's legendary life; dioramas depicting major events and turning points in his fight for the nation's freedom draw particular attention to his devotion to the poor. You can see Gandhi's old charkha (spinning wheel), which in many ways symbolized the struggle for independence, as it represented a return to roots and to sustainable home industry, where anyone can weave his or her own cloth. A visit to this tranquil spot makes a welcome change from the continuous hubbub of life in Mumbai -- go up to the roof to really appreciate the relative stillness of the surrounding neighborhood."

How to go there:

back in high school when we had world history, i know Gandhi is India's great leader but I've forgotten other important info. thanks to your post, i was reminded of his heroic deeds. :P

i don't know how he did it, you know... ghandi is really inspiring and there never will be another like him. we know it.

What a great contribution to a very important and significant man in the world showing the way to peace in a unique way - thanks for reminding and sharing this!

I read your chronicles on your travels to India - pretty interesting indeed. As you said, it is a country of contrasts. I love to be able to visit the place one day :)

Have you ever watched the movie Gandhi? Just wondering... I have not watched it myself. If you have, would you recommend it? Although I haven't seen that title being sold in stores anymore. Hmmm...

orange, glad to always be informative to my readers :P

acey, he advocated peace instead violence. worthy of emulation indeed

bw, thanks for even digging my old posts. i planned a trip to Taj Mahal then but it's too far and expensive :(

cheh, sould i ever go back, it's taj mahal in Agra and other places of incredible india

watson,have not seen the movie. only heard of it and sort of critically-acclaimed

I have also wanted to see that movie, Gandhi, starring the great Ben Kingsley. I see it at our video stores here, just might rent it when I get the chance.

I had no idea who Gandhi was until I was assigned to do a write-up about him when I was a freshman in college. I was impressed and awed by the man, and I still am. He is one of a kind.

One of the great epics of all time, is this old old movie, Gandhi.

What an honorable way to die