Tutubi didn't turn German, he just remembered the 80's song by German group Nena, "99 Luftballoons" and The Fifth Dimension's "Up, Up And Away" when he made a trip to Clark Field (formerly Clark Air Base and now Clark Economic Processing Zone (CEPZ)), Pampanga.

The fiesta saw 21 hot air balloons fly to the sky in the early morning and last day of the 12th International Hot Air Balloon Fiesta. Participating ballooners from 12 countries came with their colorful propane-powered flying machines. 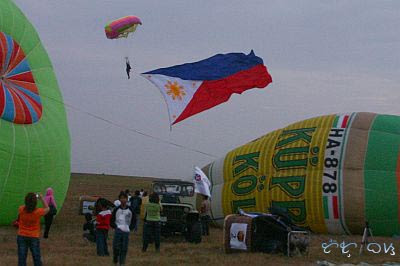 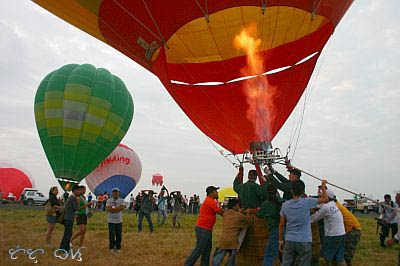 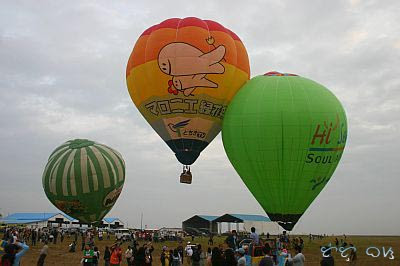 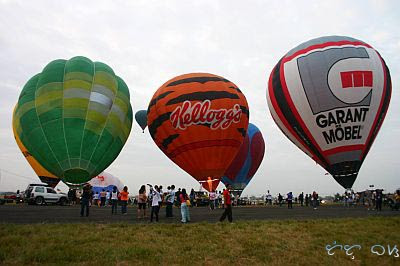 It's just bad that the weather didn't cooperate. 'Twas cloudy and quite windy, good thing Tutubi can stand the chilly wind due to his spending long hours inside the datacenter, typical of people in the IT industry 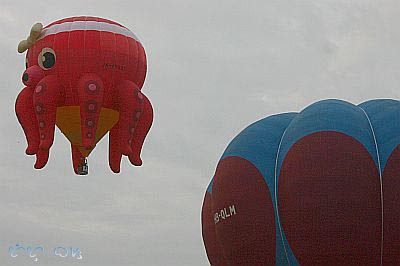 the hot air balloon that looks like an octopus reminds Tutubi of the robot of Little John, member of the Voltes V quintet :P 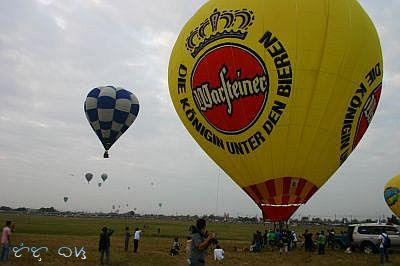 One of the last balloons to fly. (wanted to take pictures of all hot air balloons in flight but limited by the kitlens' ability to zoom in closer. This will change, however, in a few weeks) :P 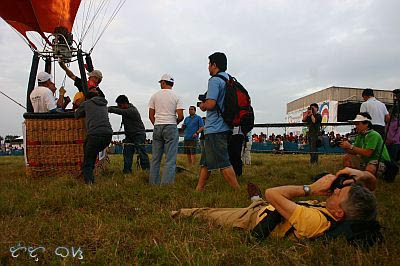 Photographing the Photographer: look at how photographers try to find the perfect shot

After the balloons disappeared on the horizon, kites by fiesta goers filled the sky, skydiving, helicopter flights and airplane acrobatics ensued but Tutubi and band of bloggers (catchlyts, orange and yam) just went to some restaurants at 10:30 for something like an Angeles City food trip to again sample the famed Kapampangan cuisine and pasalubong.

More on that next time...

Tutubi was able to secure a VIP pass to the area reserved for organizers, media and photographers (made to cough up P350 each), courtesy of J's friend manning the entrance (a DOT employee). He was also able to spot several bloggers and photographers up close.

How to get to Clark, Pampanga:

Directions by car: the best way to go there from Manila is via the NLEX (north luzon expressway), DAU exit. turn right, cross the bridge then left at the end of the street (MacArthur Highway). On reaching Caltex gasoline station, turn right. You will see SM City Clark and directions to the place so it's easy to find. Travel time is around one and a half hours from Quezon City.

wow nice shots! i'm green with envy coz you were there and im not! LOL cant wake up that early dang hehehehe

yeah the robot look like the pet of lil john =)

pusa, i woke up at 3am, left home at 4 and got there a few minutes before 530...normal lang naman sa pusalaging tulog :P

One of these days, I will get myself over there!! By hook or by crook!! ;)

the last pic reminded me of my cousin who did the same thing to take a pic of the statue of liberty.

so did you also lay on the ground to take some of the pics? =)

i was like a child simply enthralled by the beauty of humongous balloons taking off from the ground one by one. glad i was there :)

Ang ganda-ganda! That must have been amazing. I would also have loved to see how they descended the Philippine flag.

At least you saw the balloons... it seems the next days the balloons were grounded.
So, lucky you!

Wow this must be a fantastic event and opportunity for photographers! Awesome shots!

hope you could've covered the plane and chopper acrobatics, i'm interested in that one. it's also almost impossible for me to wake up that early.

wasn't able to make it again this year. then again, the skies were grey for days. though at least, you were there :-) thanks for sharing the pics tutubi

I love all the balloons, esp. the octopus. It's cute...big cute. LOL

Thanks for sharing these pictures.

awwww! i skipped it this year. kinda loaded that weekend. but looking how colorful the balloons were, i now regret it for not making it. haaay! next year uli pramis!

Hey Tutubi, nice post! Can I go with you on your next road trip when i get home for vacation.

What a lovely feast and what great report from you - all documented so well with wonderful photos - thanks for sharing!

I would have loved to go in one of those balloon one day!

Balloon meetings are always terrific settings for some photography. So colourful. Love the octopus.