Ask many Filipinos a place they've been to or wanting to go to and most likely it'll be Boracay. Ask people who've been to Boracay if they've visited Bulabog Beach and majority will say-- nay!

Tutubi's trip to Boracay is actually his first but imagine the amazement of Tutubi's companions who've been to Boracay for 2 or 3 times and yet were astonished at the sight of the "secret" beach Tutubi took them with colorful sails and kites flying from a distance, waves lapping at the white sand beach, and strong winds.

Not as popular as Boracay's four kilometer long White Beach is the so-called backpacker beach of Bulabog, incidentally also home to Asia's finest site for wind activities like kitesurfing, kiteboarding and windsurfing. It rivals Vietnam's Mui Ne Bay as a kitesurfing mecca of Asia due to it's wind powered by lady Amihan (northwest monsoon). 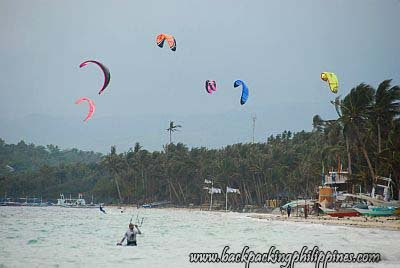 picture of Bulabog beach (sometimes mispelled as Bolabog) with kites and surfs, too bad, the picture has less kick due to cloudy skies 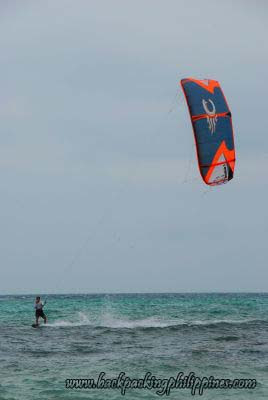 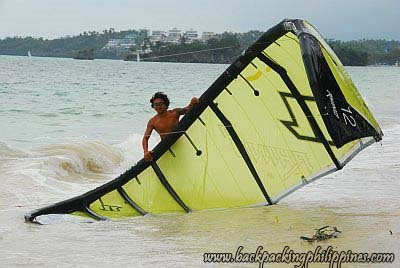 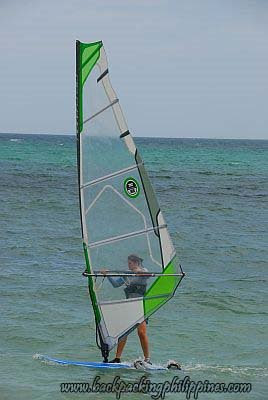 Boardsailing/Windsurfing with a Caucasian woman in action. 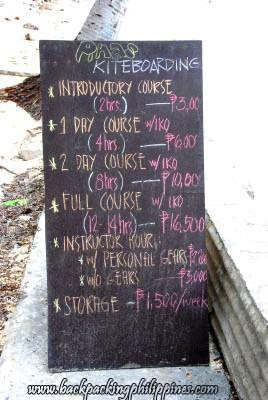 picture of a sign showing the rates of learning kitesurfing, how much does it cost? No such thing as cheap kitesurfing classes; no idea on DIY gear though. Notice also the Introductory course fee at Pinas kiteboarding

While there, Tutubi was able to spot signs in Russian plus foreigners moslty Europeans: Germans, French, Russian, Italians, British and some Americans living on Boracay Island.

It's said that Boracay was "discovered" by backpackers years ago who "leaked " pictures of the place to the world. Bulabog beach remains a backpacker beach with budget resorts lined up on the beach front.

Notes:
There are many Bulabog Beach resorts for those on a budget, unlike the touristy resorts of White Beach.


How to get to Bulabog Beach:

Bolabog is a short tricycle ride from Boracay's main White Beach, you can get out to the main road from D'Mall or D'Talipapa and take a trike from there for about 15 minutes, fare is about P60 (depends on your negotiation skills, more if you're a foreigner :). If you feel like it, you can also walk/trek to the place with the access road near Pink Patio and Metrobank (ask around, it's ok)

oh yeah, i haven't been to that beach. next time lalaboy ako jan mag-isa. i remember my cousin teaching me how to windsurf but i only got as far as trying to balance on the board lol =) magkano yung windsurfing lessons?

Where is Bulabog beach? Is it still within the Boracay island?

I've never been to any beaches in Pinas pero I ought to make it a point in going there one of these days --- or when I've made my own money. Haha!

Always been fascinated w/the beaches in Pinas. They're really beautiful.

carlotta, i forgot to ask around the rates for windsurfing. na-carried away ako sa photo op :P

I can dig though since I got the names of the winsurfing schools.

the dong, it's also on boracay. I updated this post to include my usual "how to get there" info

Hey, I like this kind of beach, where you have sporting activities, usualy a good place to stock up on great and colourful photos :-)

cool water sports. would like to try them here in cebu (never been to bora yet). btw, those rates are... wow. expensive.

I thought they used the kite tuloy for surfing! Joke!

It does seem fun, the kites are like freely moving about, saya!

I saw some of these sports when I was in Australia more than 10 years ago, but did not dare trying myself :-(

Thanks for sharing this - great pics!

Btw: Happy April Fool's Day! Your welcome over to see how easy it is to fool Norwegians :-)

16,500! that's expensive.. but of course when someone teaches you something it costs a lot. hehe.

it looks fun and the beach looks great! thanks for the info!

You're right... I've never heard of Bulabog Beach... but the name is pretty funny. :)

Wow... a different side of Boracay... windy... perfect for kiters and windsurfers! :)

I am not a big fan of beaches but I need to admit that Boracay is an exception. Thanks for the tip.

I've been to Boracay several times and I don't even know this Bulabog beach. ;)

Make sure your travel insurance covers these activities. Some carriers may deem these as extreme sports, which means you need special coverage, as the risk of injury and/or accident is higher than normal. Before leaving for your trip, discuss this with your broker to see if you need adventure travel insurance or not.

oh yes, i remember that beach, my husband liked it more than white beach because there weren't tourists lurking around that time - but it was really quite windy and looked a bit wild plus a lot of seaweed. it was a nice way to take a walk away from the maddening crowd.

Really - and no Swedes? *shaking my heads*

Looks like an exciting beach for surfers indeed. Maybe not so much to us normal sunbathing and swimming lazy ones? *giggles*

...though I know that a lot of Swedes have been on Boracay, even friends of ours - and we were on our way there in 2005.

Maybe we'll come there one day... It's a long way from Sweden, but we have been prepared to do it once and maybe can make it another year.

We have friends that goes every year to Mindoro which we planned to follow some time....

A lot of ex-pat american kiters visit Boracay from both Hawaii and the mainland. It's not quite a secret anymore, but still far enough out of reach for most stateside kiters/sailboarders that it's a pleasure to ride without the crowds normally associated with other popular places. Most foreigners I've seen were Swedes, Germans, Japanese wind junkies.

you've done kitesurfing?! wow!! yes, it's expensive. but i'd still love to try it. i hope there'll be other locations for kitesurfing besides boracay :)