With his limited time to explore Asia's Latin City i.e. Zamboanga City, Tutubi set out to visit interesting places the city has to offer. He was able to reach Fort Pilar by walking from Universidad de Zamboanga,past City Hall and Lantaka Hotel to the old stone fort. 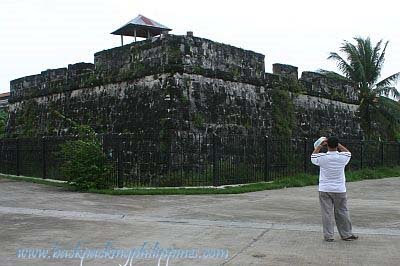 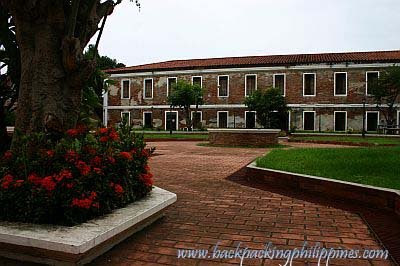 inside the stone fort with the old military barracks in view. The place is now a popular events venue for weddings and other cultural occasions. 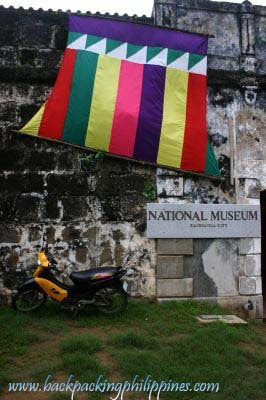 The fort was built in 1635, then known as "Real Fuerza de San Jose" later renamed "Real Fuerza de Nuestra Señora del Pilar de Zaragoza", in response to raids by the Sultans of Mindanao and Jolo, and is now simply called Fort Pilar. It survived Dutch bombardment in 1646 and the British in 1798 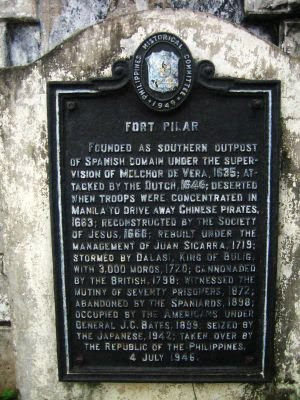 History of Fort Pilar written on the NHI marker

Fort Pilar is now a museum (alternating as a venue for weddings, art exhibits, and other events). The museum galleries has on display of the Griffin, a ship that sank off Mindanao in the 18th century (similar to the San Diego galleon's artifacts displayed at the National Museum in Manila), and ethnographic and marine biology exhibit. (No picture taking is allowed inside like most museums' policy without a proper permit. Entrance to the museum, however, is free)

The exterior of the Fort is a shrine to the Nuestra Señora del Pilar (Our Lady of the Pillar), the patroness of Zamboanga (and also of Santa Cruz, Manila, the Diocese of Imus) with fiesta celebrated on October 12. 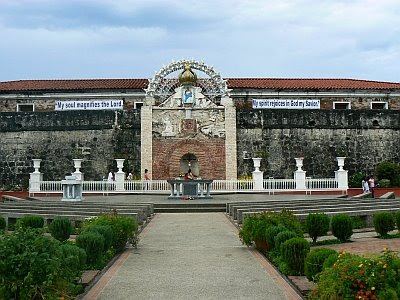 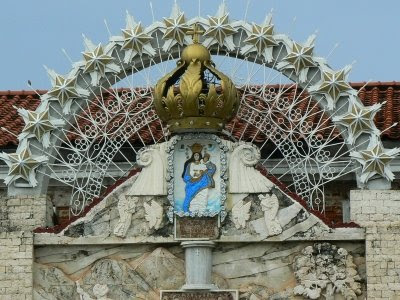 Our Lady of the Pillar, another of the numerous titles of the Blessed Virgin Mary, according to ancient tradition, narrates that in the year 40 in Zaragoza, Spain, Mary appeared to James the Greater on the Ebro River while St. James the Great was preaching. She appeared on a pillar, and the pillar is preserved and venerated within the present Basilica of Nuestra Señora Del Pilar in Zaragoza, Spain. Thus the image is called "La Virgen de Nuestra Señora del Pilar de Zaragoza (Our Lady of the Pillar of Zaragoza).

Fort Pilar is walking distance from Zamboanga City Hall, Rizal Park and Zamboanga University. You may hire a tricycle if you don't feel like walking.

wow, that is one impressive place. Didn't know it was that unsafe.
Good you survived :-)

pieterbie, Zamboanga City lies at the south end of war-torn Mindanao island where US, UK and Australian travel warnings point out as unsafe. I have to admit there are terrorists living near the city particularly in Basilan (the remnants of Abu Sayyaf)
but I find it stupid for the US and UK to issue warnings when there are also lots of terrorists in their own land and attacks there are deadlier, me thinks.

Impressive area. I love the fact that Philippines have so many forts. It's interesting, talaga!

The problem with Mindanao is that you don't really now which places are safe for foreigners. Some people say it safe, then someone else tells you it is unsafe...
So I will first visit all the other parts of the Philippines before I go there.

kyels, i think i;m going tovisitmore spanish forts in the future besides my quest for romantic lighthouses. Both are heritage of Spain.No believer in the Black Legend here.

Sidney, zamboanga city is ok...within city limits but not beyond. thereare many police and soldiers there plus Andrews Airbase where Americans participating in the war exercises with the Armed Forces. near the city,howver, is Basilan, Jolo and Tawi-tawi...you know where I'm going, right?
hope someday lasting peace finds its way for us to freely explore the area

i've seen this once in tv. hope i can travel to that place :)

It was a lot more peaceful before Al Qaeda established contact with local bandits and messed up the centuries-worth of Christian-Muslim peaceful coexistence in Zamboanga. That's what I hear from a Zamboanga native who is now residing in Metro Manila (the sister-in-law from far Zamboanga who had charmed my brother). I think she meant that there's some low-lying tension nowadays that wasn't present before.

Zamboanga is indeed a nice place and a safe place too.It just so happened that the place is having a bad impression because of the dateline in news reported in Manila.People think it's in Zamboanga where the "action" took place but actually it's far from the place.I should know because I am from Quezon City but i decided to stay in Zamboanga for good.

Iam from Basilan,even myself Iam afraid to go home to my hometown cause of they call munduhin