The first time Tutubi set foot in Cabanatuan was sometime in 1995 to visit Wesleyan University. This time, he passed by the city notorious for the presence of so many tricycles criss-crossing the busy streets of the city made notorious by the murder of a revolutionary general and the almost forgotten daring rescue of American POWs by Americans aided by Filipino guerilas during World War II.

It took barely two hours drive to go to Cabanatuan from Quezon City because Tutubi left at early at 5am and got there before 7am when Jollibee and the city's notorious "million" tricycles were still asleep. 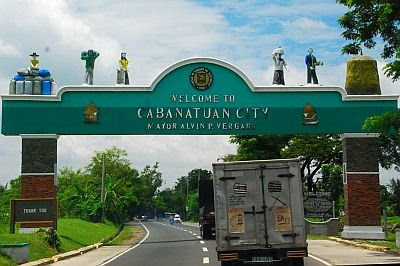 welcome arch of the city 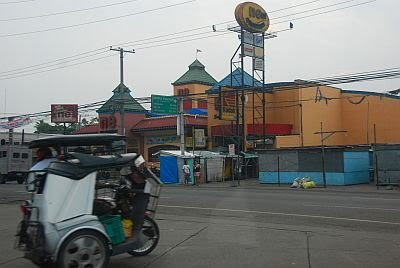 a photo of NE Crossing unobstructed but a speeding tricycle entered the frame. It's about 7am and you still can't see the other million tricycles here 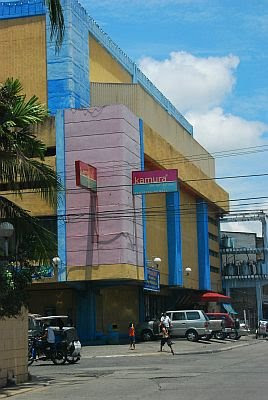 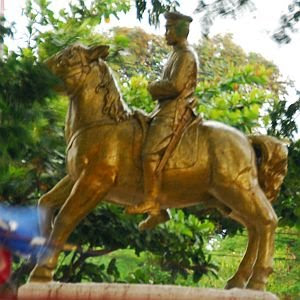 The statue of Antonio Luna near the Cathedral. For lesson in history, the revolutionary general Antonio Luna was murdered by the soldiers of Gen. Emilio Aguinaldo inside the Cabanatuan Cathedral in July 1899. (Tutubi wanted to take pictures of the statue and the marker on the wall of the church but rain fell as soon as he got out of the car...next time Tutubi, next time) 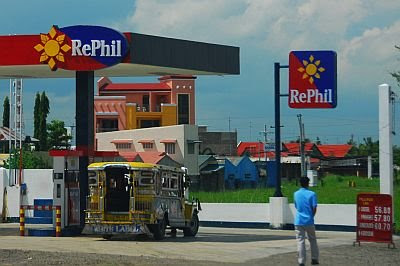 Should you find yourself in Cabanatuan, Tutubi recommends gassing up at this gas station. Too bad, he had already gassed up at Shell Crossing when he saw this nationalistic station sporting the colors of the national flag and whose name sounded like refill. Creative and nationalistic indeed!

On his return trip to Manila, Tutubi passed by the former concentration camp also in Cabanatuan which was the site of the most successful rescue mission in American military history...subject of a future post! :P

Tip: To avoid heavy traffic in Cabanatuan, there are two bypass roads you can take, one pass by Barangay Kapitan Pepe (left, coming from Manila) and the other one is up to Mabini (right, from Manila)

How to get to Cabanatuan, Nueva Ecija:

I went to school in CIC Cabanatuan it is a nice town with lots of tricycle, indeed the prices are reasonable especially for a traveler.

grabe traffic sa cabanatuan. all of the major roads you've mentioned, nadaanan ko na. hehehe. and i know NE. memorable, coz from baler.. that's where we stayed while waiting for a bus back to manila

it's really funny how you describe the trikes by the "millions". di naman ganun kadami. actually based on the local governemtn here, there aonly about 12,000 trikes registered but the problem lies with the colorums from other municipalites who flock to the city to work. people in nueva ecija definitely need alternative jobs.

I've never been there before but it seems like an interesting place!

Helo there.. you write an excellent blog. Id like to get in contact with you, could you please contact me at y email? ... id like to hear more about your viewws on the philippines, as it seems youve been pretty much all over the place :D

tin-tin, never been to baler but intend to visit it someday

lawstude, too many trikes and undisciplined drivers.

photo cache, they need alternative jobs. we were wondering if they still earn decent income there due to competition

rubukas, you didn't post your email address. Hoe can i get in touch with you? :(

That welcome arch looks really perculiar to me.

hello, i just want to add some info, in regards of pieterbie's comment with the 'arch'... it is situated right in front of our barrio,he he he...Brgy. Umangan :-)

@tutubi
not 'millions', only thousands,^_^, but quiet true about 'walang disiplina'. but still witty yet nice blog of NE.

i want to go there...
'cause this is the place where he came from..
hehe..

yOu r so cute describing millions of tricycles... and voters... Cabanatuan doesn't want to think of mass transport. I wonder who supply the million of tricycle and how much the city official gets paid to issue licenses.. Hmmm!!! what do you think???

anonymous, it happens everywhere, even here in metro manila. the mayor will refuse to issue franchises to regualte tricycles then come election time, will issue them in haste since trike drivers and operators are voters too...they don't care about the law either for clean air act requires environment-friendly motors...such is life in the philippines...regarding the suppliers, don't know well probably... :P

HI TUTUBI... i've been reading ur blog for quite some time and they're very,very helpful whenever i make travel plans for myself... makes me want to start my own blog in the future (hopefully something that has something to do with hotel reviews as my work is related to it)...

just to give u a bit more info though in this little sunny side of northern luzon called nueva ecija, in cabanatuan, they have this bakeshop in kapt. pepe called edna's cakeland which is so popular among the folks there because of this "heavenly" tiny sponge cakes called taisan and the over-creamy buko-pie plus the sylvannas... they're really delish and very cheap... a box would only cost around 120-160 pesos considering their sizes and taste... but i guess they're only open from around 7am-7pm... the bakeshop is located at the back of iglesia ni cristo church so it's hard to miss.(nwey i'm not in any way connected with the bakeshop, they're just some tried and tested products for great pasalubong ideas back to manila )

my mom's from san leonardo nueva ecija and i've been rooting for this rare rice cake called "sadya"... this is so rare that only a handful of people in a particular town knows how to make it.. it's the best "puto" i've ever tasted (next to kalamay--which is also very popular in that area they even held a fiesta dedicated solely to it every month of May),but it has to be ordered in advance and sad to say i don't know where to get it there... i just know it's in mambangnan, san leonardo(where the ostrich farm is also located if i'm not mistaken)...

i was also able to visit the science city of muñoz once and was surprised to see "humongous" ingredients for "halo-halo"... i say they really look interesting and "funny" at the same time as it's not everyday you would see a leche flan or an ube halaya in a basin (palanggana) that's how weird it is... but i wasn't able to try it though, too bad coz me and my friends were driving home and were just able to pass by the public market where i got a glimpse of them... but a definite must-try there is the carabao's milk and their pastillas made from of course, carabao's milk :) it literally would melt in your mouth.

for any backpacker going to nueva ecija, you must not expect to see any awe-inspiring, jaw-dropping sceneries... it's not like that there.. instead be ready to experience the sun's heat while enjoying all the food which i know are not that really uncommon however, a thousand times better (if you eat at the right places). and sometimes it's even free, just visit any house during the fiesta months March-April-May--kahit dka kakilala papakainin ka at busog to the max talaga! that's how hospitable they are :) i even remember going to sidestrip (cabanatuan's version of metrowalk) which is open as early as 5pm till early morning where all the yuppies and nursing students go... hahaha with just 150 pesos, u have 6 bottles of beer and 1 free sidedish na! it's located just beside n.e. pacific mall... that's how it got it's name probably.

haven't been there for like 4 years now, and i miss the place. guess i'd try to visit there soon again for some other food discoveries :) tutubi... you should really, really try the food... circle's and honey's grill for me are just common fastfoods, i guess, but if you have spare time to roam around if u happen to visit the place again, maybe you could try some of the things i wrote above (you could even ask me to come along if u want) haha kidding... keep it up bro for your avid readers like me :)

lizzy, such a lengthy comment and full of tips at that. will take note and explore next time. thanks ;P

Hello, How many hours travel from san leonardo nueva ecija goint back to manila? i wonder! :)