After finishing what needs to be done at SM City Cebu, Tutubi and his officemate asked around for a nice, yet budget-friendly restaurant nearby, their other officemate suggested Golden Cowrie near Waterfront Lahug and proceeded to order food for the group since they're already there. As usual, Tutubi requested local Cebuano cuisine be included. 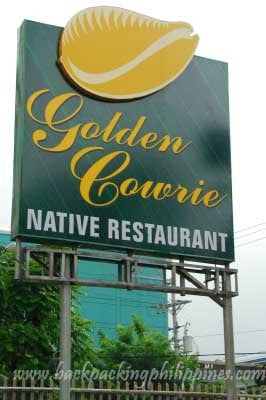 After taking another cab ride from SM City Cebu to Golden Cowrie restaurant, Tutubi was dismayed at the food ordered by his officemate who seemed uninformed of his request for she ordered bulalo, a soupy dish of Batangas provenance, Bicol Express from the Bicol region so named after the railroad from Manila with its signature coconut milk and fiery hot cuisine, and pinakbet, an Ilocano vegetable dish. 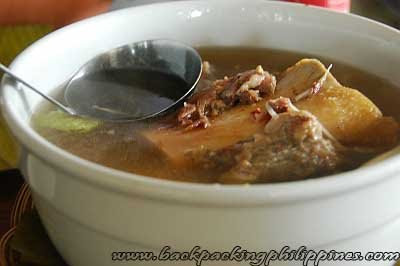 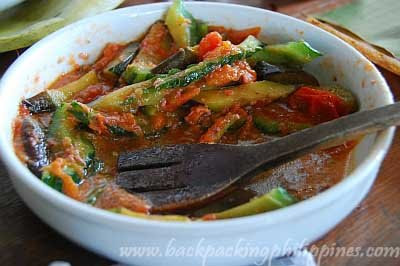 The pinakbet, vegetable meat stew of the Ilocos in northern Luzon, in it's authentic form is composed of ampalaya (bitter gourd), talong (eggplant), and kamatis (tomatoes) stewed in bagoong (fish sauce or fermented shrimp paste). This is Golden Cowrie's take on the Ilocano viand.

Tutubi, with the last option to choose the last dish opted for Chicken Halang-halang, knowing fully well that halang-halang in Cebuano means spicy hot. (Tutubi can understand and speak Cebuano although "gamay lang." He was even called an honorary Cebuano by an officemate from his previous job when he noticed he can pass of as one unlike others frustrated with using Tagalog but getting replies in English from locals in Cebu and Dumaguete) 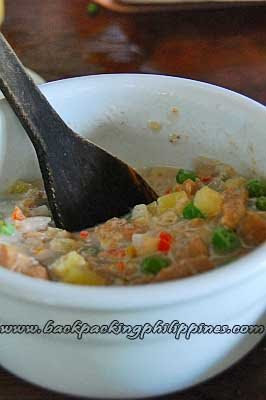 Chicken Halang-halang is a Cebuano/Visayan dish of chicken in coconut milk, spices and lots of chilies.

The Bulalo was ok, but not exceptional, there are better ones in Batangas and Cavite/Tagaytay but a steaming pot of hot soup is really welcome due to the rains still brought by typhoon Frank. The chicken halang-halang's good anre recommended with the right balance of spiciness and other spices.

All these four dishes came with all you can eat rice.

Verdict: It's a recommended restaurant looking for Filipino dishes in Cebu, comes with a price that won't make a serious hole in your pocket. Ambiance is airy and very Filipino and ample parking space for those with own vehicles.

Golden Cowrie is just a short ride away from Waterfront Lahug. Taxi is just P50 and jeepneys won't cost more than minimum fare of PhP8.50. There also is a branch at SM City Cebu Lower Ground Floor

You know I love veggies and this pinakbet looks delicious - my mouth is watering. The place looks nice and very fashionable too - thanks for sharing and with great pics.

Wishing you a great end to your week!

Thanks for the info. I'll try it next time I go to Cebu.

wow, maybe we'll bump into each other here. ;)

rennyba, should you ever find yourself here, you should try it :P

acey, should we bump into each other, i may be able to recognize you but not the other way around :P

my family and i ate at the sm cebu branch. we loved the food we ordered, but for the life of me nakalimutan ko na lahat pwera yung crispy pata. sarap! =)

jasper, the food was ok at the price. problem was that the order was not what i expected

the dong, i'm also looking for a chicken halang-halang recipe to duplicate here

grrr. i forgot. you never post pictures of you!

Hi Tutubi, are you from Cebu?

acey, actually there are photos of me here but i didn't tell readers :P

edelweiza, nope, i'm not from cebu. i'm from Paete, Laguna

It all look pretty good to me.

i love Golden Cowrie. i celebrated a lot of momentous occasions at Golden Cowrie. i love the ambiance and most especially the food. Yun nga lang when I first attempted to visit Golden Cowrie, sarado sila. they close kasi at 2pm and open again at 6pm. ganun halos lahat ng restos sa Cebu. they have a siesta time. hehe.

Looks yummy food and interesting to go there.
do they accept, visa or other cards for payment?

oh yeah oh yeah!! they serve really really good food!! and mura pa! i mean, as compared to those restos that would charge you exorbitant amounts of money and give you food that is bland and tasteless.. i always eat here whenever i'm in cebu! i love it!

:) Golden Cowrie is nice, but if u want Cowrie with less bland and more taste +quality, try Chika an sa Cebu... there is a blog about it here's the link