"Boss, chicks," a man, with a wry smile, called the attention of Tutubi while walking early evening near Fuente Osmena in Cebu. It was Tutubi's first time in the city and encountered pimps at least twice during his stay. It was the same Cebu he encountered in his second and third sojourns in the big city.

The fourth time, on his second night in Cebu, his officemates wanted to visit a karaoke bar at the lower ground floor of Waterfront Hotel called Club Nyx KTV and Bar. Three of his senior companions entered the bar while Tutubi and his friends were taking pictures of the hotel's facade. When Tutubi and his friends looked for their companions who went ahead, the guard of Club Nyx asked them if they're from the media possibly due to the DSLR camera strung on his shoulder. They were able to enter and locate their "missing" peers, later emptied San Mig Light and belted quite a number of songs when an un-ordered parade of girls entered the room together with an older woman, who later identified herself as the Mama-san, who narrated she used to work at a certain Lighthouse on Timog in Quezon City when she was poached by the Korean owner of Club Nyx.

On the offer to get a girl to accompany them, even to "take out," the group plainly said "thanks, but no thanks" to the offer and the girls left the room. Letting even one of those girls in small chat requires ordering expensive ladies drinks at regular intervals and for "take out" would have to cough up bar fines, sometimes called "leaving fines," according to a patron of such places (who knows even the prices of various bars he frequents), are the payment a customer pays the bar owners for "taking out" their employees, euphemistically called GROs, short for guest relations officers. 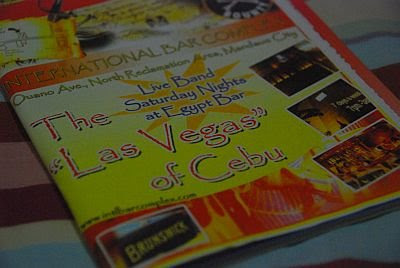 Cebu tourism is also a booming industry but the dark side of this is highly evident with a booming flesh trade with the mushrooming of girlie bars masquerading as KTV, clubs, bars (sans the long table), GROs moonlighting as prostitutes and even streetwalkers looking for quick cash. This was confirmed by this report by Cebu Daily News recently.

Tutubi doesn't advocate sex tourism, which he jokingly refers to as Air Force One tourism, referring to some people he knows who take visitors to the popular hangout near Manila's Airport. He respects the opposite sex and prefers not to have the same image as Thailand's famous Pat Pong district in Bangkok and instead strive for genuine and sustainable tourism development of which the country, not only Cebu, has a big potential.

Prostitution is illegal in the Philippines but it's practice is an open secret in other places like Angeles City, Quezon Avenue in Quezon City, Burgos St. in Makati among other tourist destinations.

What Tutubi can say about Cebu is that there are lots of "eye candies," in one place-- mga guwapa gyud mga Cebuana! :P

that's a sad news! although it happens secretly but it also happens rampantly.

the dong, cebu nightlife...the dark side of cebu :(

It is everywhere, my friend.
I was in Bordeaux, France a few weeks ago. I make the mistake of taking a picture of a woman I thought was together with this man who was clearly a tourist. I thought: my God, that guy's wife looks like a cheap prostitute. When I got to the side street (she was on the corner) I noticed that it was full of street prostitutes and the woman quickly called her "protector", I heard her say, hurry, this guy took a photo of me. I can tell you: I hurried out of there.

Interesting...We'll be visiting this Oct. That's bad news for girls like me who travel alone. It means bigger chances of being bugged by creepy guys who are into that thing.

J, when will you be there alone? I'm into that thing and would love to meet you. Maybe we could share a girl if you like three-way?

whoa! i've been to cebu hundreds of times already and never have i encountered a pimp.. well maybe because i'm a girl.. lol.. well, its too bad that women are being exploited this way but we can't do anything about it right? :(

paulette, no pimps for girls...a friend of mine encountered a pimp for men in butuan who thought my friend was gay :(

oh my gosh, gee golly thats terrible. those poor girls, with their ability to make their own choice and earn all that money. someone should stop this