The first trip of Tutubi outside Luzon and also his first airplane ride took him to Cebu City for a work errand. He stayed at the imposing Waterfront Lahug. That "historic" trip was followed three more times to Cebu but those trips were not much documented nor posted in this blog except for a few archived entries. 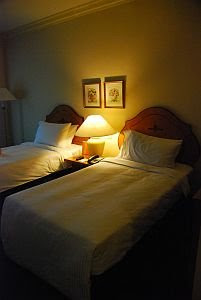 This time, he returned to Cebu City and billeted again at the spanking Waterfront Lahug for a 3D/2N official trip amidst the eye of storm Frank lashing the "island in the Pacific."

Due to his busy schedule he wasn't able to research much about new destinations to explore in the "Queen City of the South" and worst, he wasn't aware of the presence of typhoon Frank (International code name: Fengshen) battering the city that explained why it was raining in the city when he was there (it was at this time when Sulpicio Lines' MV Princess of the Stars got a beating and sank near Sibuyan Island in Romblon)
(Tutubi's twin sharing room (right)) 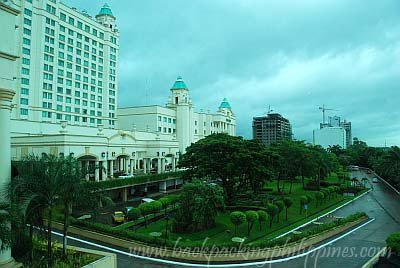 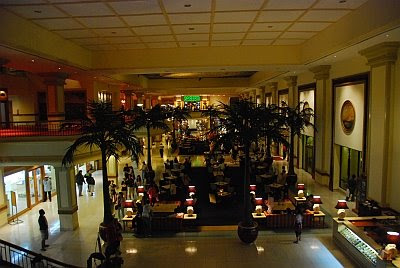 the hotel lobby is not the usual cavernous one with large chandelier in the middle. there's a large painting on the ceiling depicting cebu's rich historic past and lots of galleons and ships on display 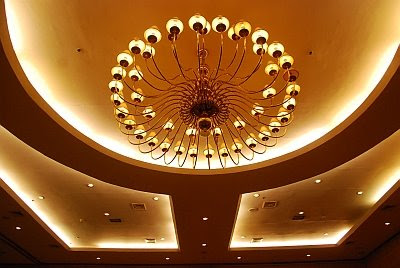 ceiling of one of the conference rooms in the convention center 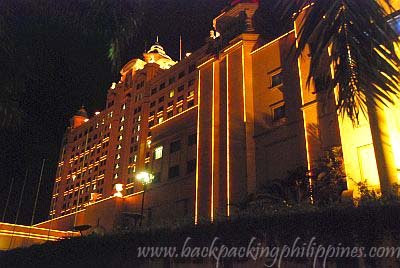 a hand-held nightshot of the facade 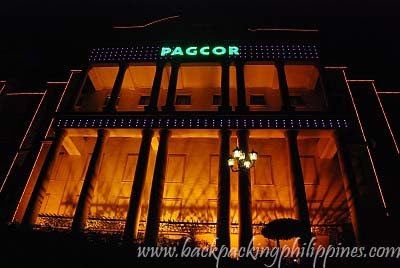 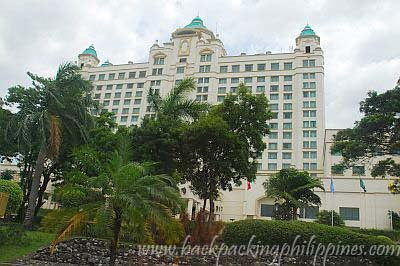 a last stolen shot of Waterfront's facade inside the van that took him back to Mactan-Cebu International Airport.

Service staff and front desk are courteous. Complimentary bottled water are available. Newspaper are available for pick-up at the concierge. Breakfast is served at UNO restaurant with a wide selection of Filipino, Japanese, Chinese, American and European dishes to choose from. There's a direct access to a casino frequented by tourists and curious people alike. There's a Japanese restaurant (Mizu), Chinese, Italian with a Venetian twist and Duty-free shop all inside the premises. Restaurants in the vicinity include The Port Seafood Restaurant with their P400 buffet meal and a KTV Bar(that looks more like a hooker front owned by a Korean)

Taxis are plentiful to take you anywhere in the City e.g. taxi fare is just P50 to take you to SM City Cebu and about P150 from Cebu Airport. You may take a jeepney also to downtown Cebu if you feel like commuting around the city.

Lastly, this is not recommended for backpackers and budget travelers due to it's high price tag, there are lots of cheap accommodations (inns, pension houses,hostels and appartelles) in Cebu City that you can find due to it's popularity with tourists and retirees. The hotel is a popular events venue for weddings, parties and seminars/conferences.

Note: there are two Waterfront Hotels in Cebu, the other one is popularly called the Waterfront Mactan just in front of Mactan-Cebu International Airport. There's also Waterfront Manila Pavilion on UN Avenue in Manila and Waterfront Insular Hotel in Davao City.

What luxury in a fancy hotel - beautiful and well captured of the atmosphere in your pictures - thanks for sharing.

one of the best lobby that i've visited. i love the painting on its ceiling as you've mentioned.

also stayed there once and played at the casino.

i love this hotel.

the dong, haven't been inside a casino. I look like a minor and minors are not allowed inside

yay. nice shots you have there.. and you went when Frank visited? posh ha.

your shots are terrific. the hotel really looks luxurious. nice to have you stay there in comfort.

I'm contacting you from the travel network www.iloho.com.We really love your blog and wanted to know whether you'd be interested in our social bookmarking button?

If so, it'd be great if you could drop me a line with your email address so I can get in touch.

Thanks very much,
Carie Law
carie.l@iloho.com

photo cache, yes,didn't get to explore much. in fact i slept throughout my first day, seminar on the second day then left on the third day. at least the hotel's cozy

Naku, Waterfront. When I visited the place, nag-Casino ako! LOL. it was my first time and true to what they call "Beginner's Luck", I won several times, consecutive times pa. hehe. Food is also good in Waterfront Lahug and of course, the service. :-)

Staying there for one month, I saw how it doesn't deserve its five stars. The staff is not courteous at all, and they don't follow through on what they say they'll do. They're not worth the money you pay for.