Right after checking in at Monte Carlo Hotel, Tutubi's other companion, Jerry, had to return to Manila and requested to proceed to Calao area and buy his return bus ticket at Victory Liner, later found out to be fully-booked, and instead bought a ticket at Baliwag Transit just across Victory Liner terminal.

Since the trio were getting hungry, Tutubi's driver asked he wanted to have an early dinner for him to rest early. Tutubi replied in the affirmative. Jerry wanted to call House 48 for their steak but Tutubi wanted something Filipino or at least taste local cuisine of Isabela. His driver suggested a bangus grill nearby where they agreed to have their dinner.

On the road going to the bangus grill, Tutubi spotted the large sign of Balay na Santiago, a museum he thought was near the City Hall, but found out is near the barangay hall of Calao West. He immediately signaled his driver to stop for him to pay a visit to the museum. 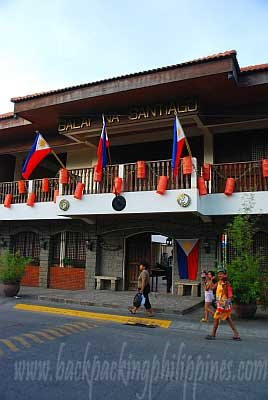 Balay na Santiago looks like a reconstruction of a bahay na bato with the facade modeled after the Aguinaldo Mansion in Kawit, Cavite.

At the museum entrance, they were told by the attendant that they're about to close since it's already 5 o'clock in the afternoon but Tutubi pleaded for him to get in telling the attendant they came from Manila and can't possibly come back the morrow. The attendant let them in and guided them to the various rooms and displays already closed with the lights off, even allowed him to photograph items on display, not so typical of other museums he's been to.


Inside the museum were pictures of Santiago City's tourist spots, old pictures of stone churches of Alicia, Tumauini and San Pablo, old furnitures redolent of a long-gone era you only find in old heritage houses, mementos from the Cordillera like their nipa huts and bulul (rice granary gods) and even giant paper mache similar to those paraded during the Higantes Festival in Angono Rizal annually on November 22 and 23. 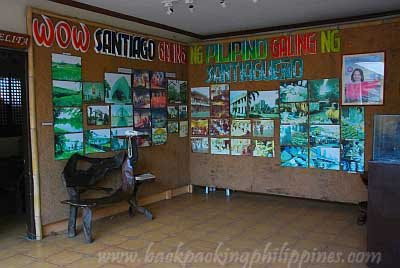 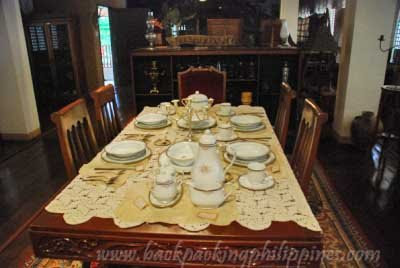 dining room setting of an aristocratic past 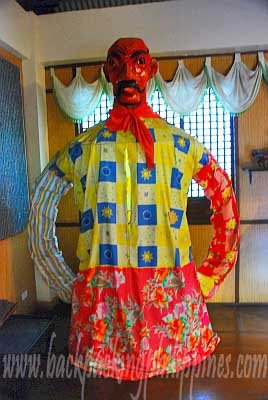 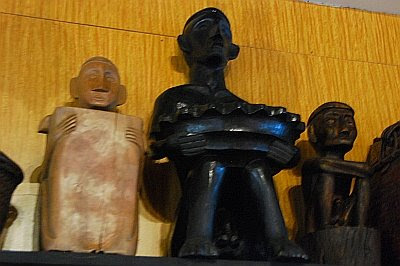 Balay na Santiago is open from 8am to 12nn and 1:30pm to 5pm daily. Admission fee is P5 for adults and P3 for students/children.

There is the Isabela Museum and Library at the Old Capitol Building in Ilagan town and also up north is the National Museum branch in Tuguegarao with important geological and archeological findings in Cagayan Valley on display.

How to get there:
Hire a tricycle to take you to the place from the bus terminals of Victory Liner and Baliwag Transit in Calao.

Just wondering where do you get your budget for travelling all over the Philippines?

I am just very curious.

What a wonderful museum - I'm so glad you stopped and even more: to share it with us!

Wow, this is interesting. But what is the main theme in the museum?

achilles, it's a mix of personal funds for personal trips. this trip was an official one, my hotel, food and service vehicle paid for my company. this is just a sidetrip after my official business. I also have decent earning from this blog, not much but still money to me :P

kyels, it's mosly about heritage and culture of Santiago City and its people, the Santiaguenos

Ilocanos are understanding specially if they know that you were new comers in their place.
I like their dining table and chairs they are shiny although they are already old.

it was really nice of them to let you in even after-hours ;-)

Thank you for reply.

My blog too is under GOOGLE Accounts.
There are Ad Sense on my blog. but for the past 4 months my profit is only $11.00 but the most important thing is everything is free I don't have to pay anything on my BLOG.

You can teach me how to earn profit through blogging? please

i like the statue of a man wearing colored shirt.what do you call that one?

nanaybelena and gandarynako, it's a simple request granted through the power of persuasion :P

Achilles, it took me almost 2 years to learn how to optimize earnings from this blog since i wasn't really into it. grow your traffic first and learn SEO and adsense optimization. i post about these things in my alternate blog :P

i really love tale settings like that! very old filipino.

wow, great artifacts tutubi. i learn something new about the place thru you. thanks for sharing.

hey, if it isn't too much to ask (kakapalan ko na mukha ko), i am nominated in this pinoyworld blog contest and i need votes. please check the poll in my blog and vote for LAWSTUDE. thanks bro.

More great places that otherwise we never would have heard of if it weren't for your blog. Thanks for posting about this great museum Tutubi!

acey, spanish is more like it but love it too

Toe, thanks. lots of places still unblogged...so much more to conquer

anyway enjoy santiago when you have time again to go there

That dining room reminds me of a place where I stayed once. Near London.