Nueva Vizcaya: The Historic Dalton Pass and the Battle with Gen. Yamashita

The exciting thing about unplanned travels is the joy of "discovering" something you never knew exists in a place that's not actually in your destination, but somewhere along the journey. Tutubi again was surprised when crossing the zigzag roads of Cagayan Valley road nearing the boundary of the provinces of Nueva Ecija and Nueva Vizcaya, he saw from the distance big letters on top of the highest hills sandwiched by the Caraballo and Sierra Madre mountain ranges indicating Balete Pass.

On reaching the boundary arch and the signs at the place, Tutubi didn't expect he'd stumble unto a historic site with markers and memorials for thousands of soldiers-- Filipinos, Americans, Japanese and Chinese -- of World War II died in battle for gateway of Cagayan Valley. He only read about the pass in history books. 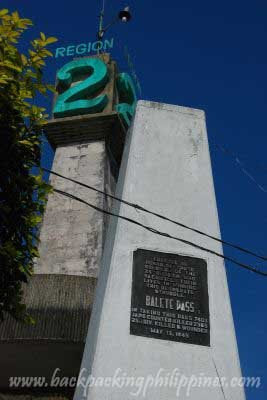 The obelisk of Region 2: Cagayan Valley and the Balete Pass Marker that states:
"Erected in honor of those soldiers ofthe 25th Division who sacrificed their lives in winning this desperate struggle. 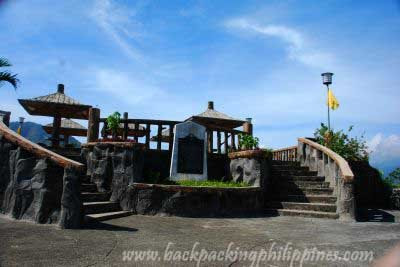 the viewdeck where a NHI marker is installed to commemorate the event.

The NHI marker, written in Filipino and translated as "Site of the battle between Americans and Japanese in order to control Cagayan Valley from February 21 up to May 1945. Attacked by combined forces of US 25th Division, Filipino Luzon Guerilla Forces (LGAF) under Col. Robert Lapham, and Chinese. Was able to push Japanese Shobu under Gen. Tomoyuki Yamashita. The Japanese retreated to Central Corldillera.The first American patrol arrived on May 9 1945. Declared open to Allied Forces 13 May 1945. Renamed Dalton Pass 13 May 1945 in honor of Brig. Gen. James L. Dalton who was killed by sniper fire on 16 May 1945." 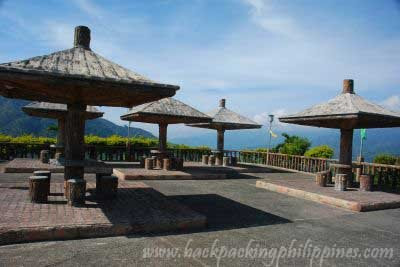 The various cabanas for shelter at the viewdeck 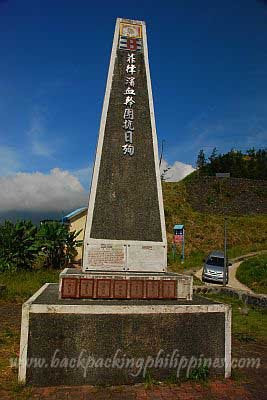 A memorial to the 8 fallen comrades of the Chinese Overseas Wartime Hsuekan Militia (COWHM) during mopping-up operations...only eight of them perished...still a lucky number? better if none of them made the supreme sacrifice 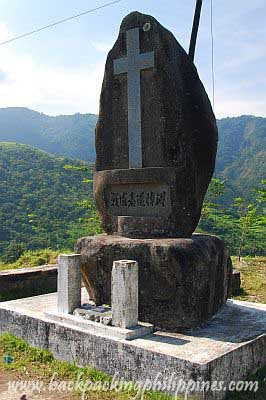 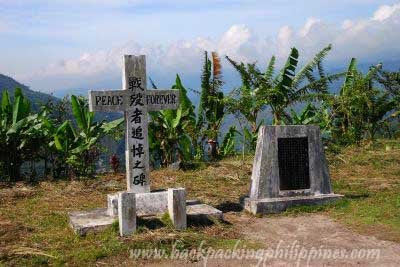 marker with Japanese inscriptions and a cross with the words PEACE FOREVER! 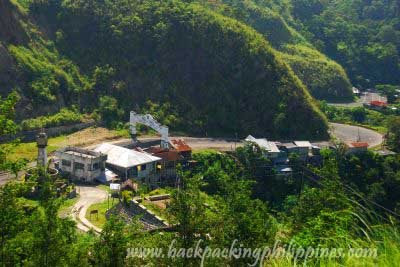 The viewdeck was constructed from the highest point, about 3000 ft above sea level, with a strategic view of the snake road below.Note that it's located at the boundary of Nueva Ecija and Nueva Vizcaya provinces. 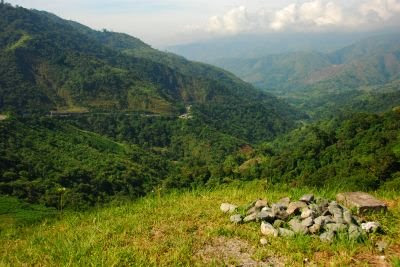 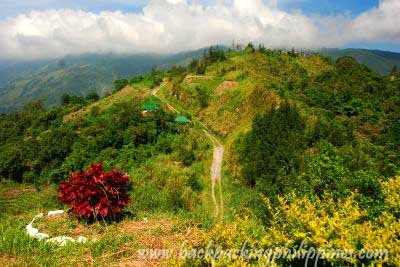 Somewhere in this valleys and hills lie Imugan waterfalls said to be reachable by 30 minute trek from the Imugan poblacion. 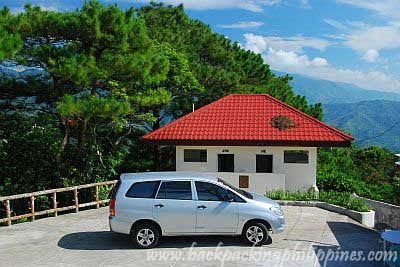 Tutubi's service vehicle, a Toyota Innova parked near the viewdeck (it's nice you don't need to trek up) plus the comfort room. Notice also trees that look like pine trees, probably agoho.

History tells us after capturing Balete Pass, Gen. Tomoyuki Yamashita retreated to the Cordilleras and eventually surrendered in Kiangan town of Ifugao (there's a marker at the surrender site), tried by a kangaroo court of Gen. Douglas MacArthur and executed somewhere in Los Baños, Laguna (that Tutubi still hasn't found out exactly where due to limited information).

What's odd and common to historic places are the seeming apathy of Filipinos to history e.g. Tutubi's driver is from Santiago City, always passing by the place, and yet he was only able to go up the shrine on the prodding of Tutubi.

There is an entrance fee of P5 for visitors to the historic shrine.

The Balete Pass National Shrine is under the jurisdiction of the town of Sta. Fe, Nueva Vizcaya and also holds the annual Kalanguya Festival that celebrates the indigenous culture and way of life of the Kalanguya tribe of Ifugao. The Kalanguya tribe Also nearby is Capintalan in the town of Carranglan. It is also the gateway to the Cagayan Valley Region and the Ifugao Rice Terraces.

Nearby is another historic pass, Kirang Pass in Barangay Kirang, municipality of Aritao, built by the Rakunsankai Society of Japan.

Another historic pass is Bessang Pass in Cervantes, Ilocos Sur and Tirad Pass in Del Pilar, also in Ilocos Sur.

The most popular pass in Philippine history is Tirad Pass (or Pasong Tirad in Filipino), located in Ilocos Sur province in the town of Del Pilar, named after the Filipino revolutionary general Gregorio del Pilar, who along with a few select men, defended the pass valiantly against the Americans then pursuing Gen. Emilio Aguinaldo. Similar to the Greek Thermopylae immortalized in the Hollywood movie 300, the Americans were only able to break through the defenses of the gallant Filipinos when a local guided the Americans through a trail that lead behind the lines of defending Filipinos who all died in the battle.

Another intereting historic location. Blogs like your make places and the history behind it makes it accessible to many people.

Historic location! It sounds like a nice place to visit though.

nice blog keep it up.. if you would like to link exchange just drop me and well think what we can do.. http://thailandtravel-hotels.blogspot.com

Very beautiful area! I like the shots of the war memorial!

really interesting.. to learn more about history by actually going to the sites than just reading in books..

the snake road, is that one they say is more treacherous than kennon road (actually, not anymore)? or there's another one?

traveler on foot,i'm hot on the trail of yamashita searching for his treasure :P

kyels,nice and unexpected. I knew of dalton pass but unaware of the viewdeck

reeyuh, not sure but kennon road's notorious for landslides. thesnake road here didn't look like one though I saw tunnels made to avoid landslides only on some portions

We were taught Philippine history, the revolution, and our heroes, in school, but we were never encouraged nor never taken by the school to some historical sights. It was not instilled in our young minds the importance of these places; this could be why there's apathy to some of us.

That said, I'm glad you're sharing with us photos of these historical places.

Oww.. my father was bayoneted in tirad pass. He was a ww2 soldier. he survive
thanks for sharing the pictures.

wow! we were with our research team there 2 years ago. unfortunately, i wasn't able to get our pics from my boss. may i repost these pics? i'll acknowledge you.

hello there, care to exchange links with my travel blog too as http://bloggertraveldestinations.com and let me know when your done adding my link and I will add u up, take care and good day!

yan ang mga lugar na gusto ko rin talagang puntahan. never been to this side of the philippines. siguro by november dyan ako.

You are right about our apathy. I didn't know about that place either. Besides being historic, the view from the deck also looks spectacular. You'll never find it in the tourist books and Philippine guides. Thanks for this info Tutubi.

going up dalton pass is indeed one of the pleasurable rides in the north. however, during the rainy months, there are landslides along the way.

I am from the area and it is indeed beautiful! I haven't been back for a few years. I recommend to anyone to visit this area of the Philippines. You won't regret it!