With the museum geek in him satiated, Tutubi, and his two companions proceeded to their destination just around the corner from Balay na Santiago, a quaint restaurant advertising bangus (milkfish) grill and bibingka.

Branding the name Genaro's bangus grill, the place is a late replacement for the earlier planned trip to Hose 48 Steakhouse for their steaks raved by other bloggers, that sports a simple homey ambiance. A freezer where you point to various ingredients, sort of a Sutukil, on display and cooked per your directions either sinigang (sour broth), nilaga (soupy), inihaw (grilled) 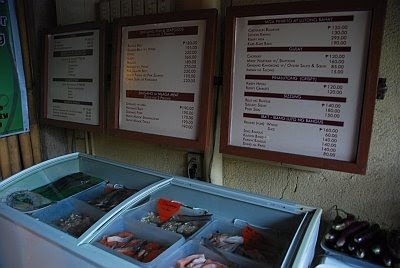 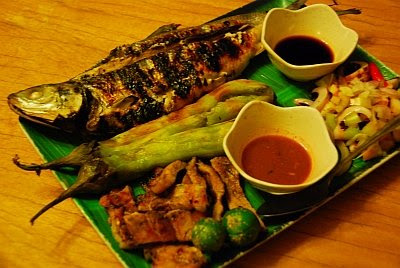 Since they're only three and with limited budget, they just ordered sinigang na pink salmon plus the so-called Genaro's treat, a sampler of inihaw na talong (grilled eggplant), grilled milkfish and inihaw na liempo (grilled pork spareribs) with spicy dips. 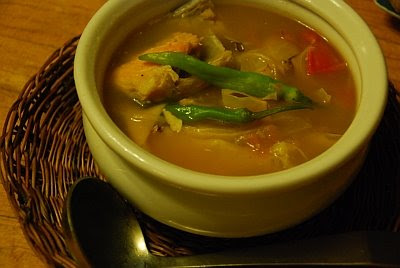 After the early heavy dinner, Tutubi proceeded to Monte Carlo Hotel for his well-deserved rest and slept soundly throughout the night...

At 7 in the morning, after taking his complimentary breakfast of daing na bangus, Tutubi checked out of the hotel and drove back to Manila. It's in Santiago City's center that they got caught inside heavy traffic due to an on-going parade that he realized that the city's celebrating the fiesta in honor of San Santiago (St. James whose feat day falls on July 25), the same patron saint of his hometown Paete in Laguna. Traffic was so heavy that even large trailer trucks were forced by the city government to traverse the labyrinthine alleys of the city with so little room for maneuvering.

The attempts to evade traffic and find a way out of the city bore positive results when Tutubi stumbled on an old house, bahay na bato architecture, said to be the ancestral house of the Abaya clan while out of an unknown street corner saw a Chinese temple. 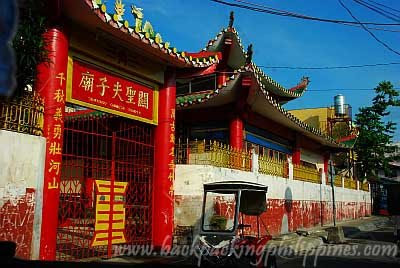 Santiago Chinese Temple, no idea if Taoist temple or not since Tutubi just passed by the street where it's located 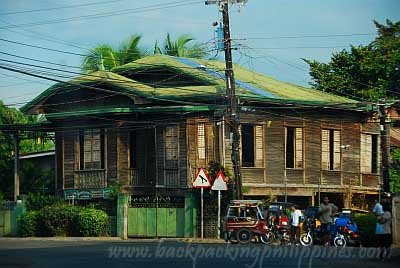 The ancestral home of the Abayas in Santiago City

From there Tutubi retraced the route back to Manila, stopping momentarily again at G&B in Bagabag, Nueva Vizcaya to buy buko pies as pasalubong, searched for the former POW concentration camp in Cabanatuan City and finally a last minute pasalubong shopping at Sevilla Sweets in San Miguel, Bulacan for the famous pastillas.

nice eating stories tutubi..btw, zuchinni is not eggplant. i don't know it's equivalent in 'pinas. i don't remember eating any 'local' types.

wow, that was some adventure. looks like you enjoyed it a lot =)

I got hungry just by looking at your photos! I have been to only one town in Isabela..I think it was Alicia (where the bliss housing is) but that was a long time ago. Very scenic province. Nice pictures as always!

The dishes looked good albeit simple.

Mikel, oh yes, i was distracted by that zucchini while grocery shopping at Walter Mart. It looked like an eggplant :( thanks

Nice, Isabela is a nice place, underrated much like Nueva Vizcaya

Toe, that ancestral home is like one of the few remaining, probably burned by the Japanese in WWII or demolished by apathy :(

the dong, masarap nga as in hehe

Dennis, didn't have the chance to visit Alicia. One of my close friends is from there pa naman.

Kyels, most of Filipino cuisine are simple...

Excellent stopovers.=)
You could have made the short side trip to Banaue Rice Terraces pala from Solano (around 3 hours back and forth by my estimation).
I find that, that place is always great for some peaceful reflection.

Ruy, i can't go there. i can't go out of the route that wrong for my vehicle's paid for by my company. i can only make short stops along the way. I've been to Banaue already but only for a short visit, raining also, after sagada and bontoc

i'm from isabela (Santiago City). and i don't get to see a lot of blogs/posts about my provice.

salamat! glad you had fun :)

Very nice post with very useful information. Thanks for sharing!