Right after finishing his official job in San Mateo town, the drive southwards back to Santiago City was interrupted again by Tutubi when he saw the road signs leading to Magat Dam on a road also leading to Ifugao province. He instructed his driver to turn right on a mostly "rocky" road leading to the dam said to be a popular picnic place for the locals

Tutubi's driver wanted him to buy tilapia grown in cages in the lake but found none selling the fish and so just took a few photos before leaving. 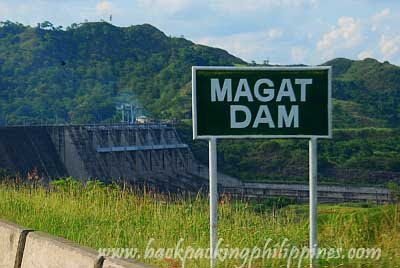 picture of Magat dam with the massive spillway on the background

According to a sign at Magat Dam, "The Magat Dam Brief History:

The construction of the Magat Dam and appurtenant structures, the principal feature of the Magat River Project (MRRP) was authorized by Presidential Decree 693 signed on May 7, 1975 by the late President Ferdinand Edralin Marcos.

Implementation of the project was based on the preliminary study conducted in 1973 by the National Irrigation Administration (NIA) with the assistance of the United States Bureau of Reclamation (USBR) and the United States Agency for International Development (USAID).

Subsequent detailed and extensive damsite investigation and engineering studies further confirmed the feasibility of what is now known as NIA's most daring infrastructure project and one of Asia's biggest dams today. 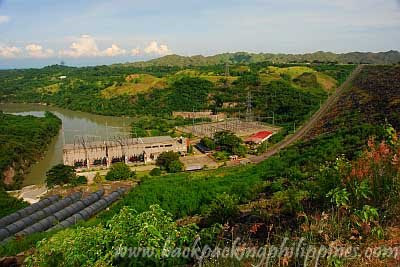 The present hydro-electric power plant is acting in reserve capacity. It only runs when additional power is needed 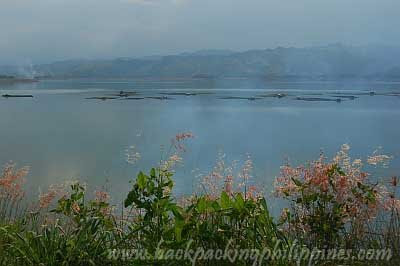 The lake reservoir, created from Magat River, is now used as tilapia farms by some enterprising locals 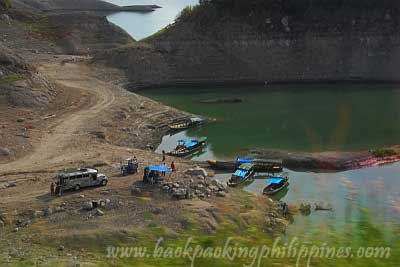 A place where harvested tilapia from the fish cages are unloaded from boats and loaded on jeepneys. Notice also the low water level of the dam

Magat Hydroelectric Power Plant sits at the boundary of Alfonso Lista town of Ifugao (part of the Cordillera Administrative Region) and the town of Ramon, Isabela.

Other dams in the Philippines are La Mesa Dam in Quezon City/Rizal province (site of the La Mesa Ecopark), Pantabangan Dam in Nueva Ecija, San Roque Dam in Pangasinan, Wawa Dam in Montalban (Rodriguez), Rizal. A similar project can also be found in Laguna with Caliraya Lake(including Lake Lumot) as reservoirs.

Tutubi would also love to visit the engineering wonder of Hoover Dam in Colorado, USA and the Three Gorges Dam in China, currently the world's largest hydro-electric power plant in the world.

Directions for those with vehicles: there's a road going there with direction signs on the highway of Ramon town of Isabela between San Mateo and Santiago City.

For those commuting, Magat Dam is a jeepney ride from Santiago City plus a tricycle to the park. A tricycle terminal is located at the corner of the highway in Ramon to take you to the place.

That's quite an interesting dam.

There is so much of nature's wonder about the Philippines waiting to be discovered and developed.Thanks for sharing this one!:)

it's nice that you featured dams on your blog. quite a unique post.

Hi! I'm Jobelle from Globetrotting Lens Publishing and we will be publishing a travel guide series about the Philippines. Anyway, I'm inviting you to post your travel photos on our website: www.globetrottinglens.com. I really love your photos and articles.Thanks!

Hi,
Cool picture. Thanks for the post. Keep it up

All my life I heard of Magat Dam and never really bothered to look it up. All the while I thought it was somewhere in Bulacan. Thanks for the information.

If you ever go to Hoover Dam, you'd be thrilled to take pics of the place. I visited it many years ago but my film got damaged duh :(

really amazing facts about the place tutubi. its been decades since i have set foot in isabela. i think its now time to go back there.

I never even know there is a Magat Dam. Isn't there a Marikina Dam? Or was the plan scrapped?

kyels, it's even inviting for a swim :P

cliffnotes, so many things to feature and places to visit

the dong, not much info online on this one but glad i found it :P

jobelle, will consider it thanks

photo cache, this one's part of the "planned" part that materialized :P

bw, i'd love to visit hoover someday. buti wala na dun si Optimus Prime and the Decepticons vs the Autobots of Transformers in the movie :P

lawstude, isabela, like Nueva Vizcaya has huge ecotourism potential. Gov. Padaca needs to focus on it too besides her campaign on jueteng and illegal logging

mari, don't know about marikina dam...will dig for info if i find the time

anonymous, i don't get it. there's even a picture of the hydroelectric plant here...or you don't understand english...not even common sense can make you get it :(
people...

I used to live in one of the islands around magat dam early 1986. Around the area, napakaraming waterfalls. I'll try to find those pics when i visited my hometown san mateo. by the way, it's really a hydroelectric power plant and the biggest dam in asia. fyi.

It brings back memories for me, and pride, being able to have the opportunity and honor, to work in one of the most important Infrastructure Project in the Philippines. I remember the Power House..... from elevation 4.... all the way to the roof..... I was involved with the works on Penstock Liners, Airconditioning System, Potable water System, Plumbing and some other items that I can't remember anymore.... A very beautiful place that I will never get tired of. An experience that I'm proud to tell everyone.....

I need a very good picture of Magat dam.

anonymous, either you go there yourself to take the picture or hire a photographer to it for you. either way, you need to pay for it :P

The Magat High Dam has indeed experienced changes (for the better!) and it is now proposed by the LGU an the NIA-MARIIS to make it also a tourist spot, hence, a view deck was also constructed and the dam reservoir is being cleared of fishpens as these will contribute to the silting of the Dam.