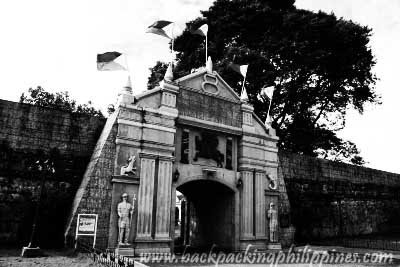 The main gate of Fort Triunfo, sometimes referred as Fort Santiago, quite confusing since Fort Santiago is mostly identified with Intramuros in Manila

"Made of coral stone, rectangular-shaped with four bulwarks: San Fernando, San Jose, Santiago at San Ignatio, 1756, base of the Philippine Constabulary at the time of the Americans and the Japanese. Destroyed by earthquake of 1955. It's where Our Lady of Immaculate Conception was enshrined called Virgin Mary, Virgin of the Fort, venerated and visited by devotees on July 16. Repaired 2002. Declared as National Historical Landmark, 13 March 2002" 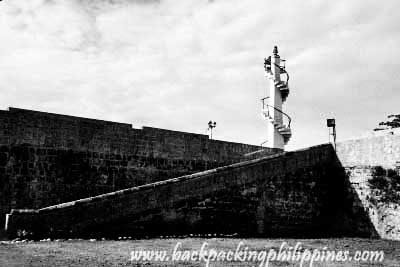 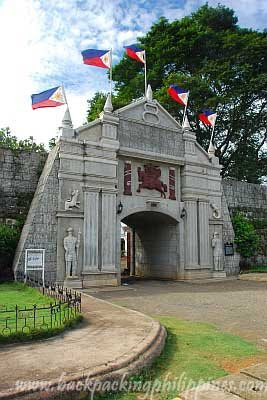 Gate of the fort in color, note the use of St. James (San Santiago) riding on a horse

Inside Fort triunfo is a museum (not much on display except sample coral stones used in original construction of the fortress, plus some antiques), the old armory, a Subanen tribal house, and also Lanao and Maguindanao traditional huts. 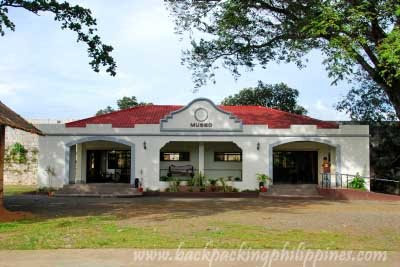 the museum building inside the fort, not much on display though 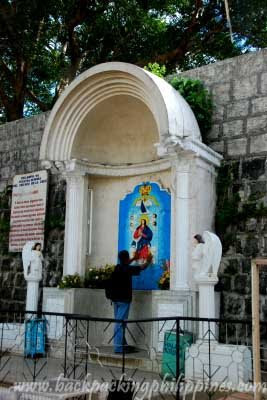 outside the wall facing Panguil bay is the image of the Virgin of the Cotta, venerated by Catholics , and also a popular pilgrimage site

A small shrine outside the walls venerating Nuestra Señora de la Concepcion y Triunfo or sometimes the Blessed Virgin of the Cotta of Misamis.

The fort underwent major repairs, some parts, as claimed were not even on the original plan plus the addition of a lighthouse.

From outside the fort, you can get views of Bukagan Hill, where large bells were installed, Cotta Beach, a popular "dipping" spot for the locals.

Flights to Ozamiz City from Manila are serviced by Air Philippines and PAL Express (code-share with AirPhils) with daily flights but prone to delays. Cebu Pacific Flights wil be available in November 2008. Flights from Cebu to Ozamiz started just last Sunday, September 14, with flights every Tuesday, Thursday and Sunday.

Cotta and Fort Triunfo can be reached from Ozamiz City Airport via a short tricycle ride (fare: P50/person). Buses from Cagayan de Oro, Pagadian, Zamboanga City and Dipolog also service the city's commuters. There are are regular ferry scheduled trips from Mukas, Kolambugan town of Lanao del Norte across Panguil Bay for about 30 minutes travel time.

really now>? never heard of this one. Very similar to INTRAMUROS ayt?

The first photo does look like Intramuros though and can be easily mistaken for it ... ;D

salingpusa and kyels, probably due to the use of the same style and coat of arms of santiago at the gate

carlotta, it's a small fort, constructed with idea of naval support at the bay to ward of invaders and control the movement of Spaniards' enemies who live inland

Hmmm....havent heard of this one either. :/ Anyways i found a site that you might like, its called baraaza.com

mimi, the new lighthouses like the one at lucap wharf in pangasinan. yeah, they all look the same. but not the old romantic ones...I have a category of lighhouses here including the one at the mouth of the pasig river

I agree that the entrance arch is very similar to Fort Santiago especially the bass relief of Santiago Matamoro without the moors being slayed by the parton saint of Spain.

those forts are beautiful but they give me the creeps. i can just imagine that it not only protected from invaders, it also contained prisoners, some of whom must've died.

The black and white pic looks great coz it depicts how much history is behind these edifices !

I never realized Ozamis is full of interesting landmarks. My memory of this city is vague I only have two things attached to it: my scary Fokker plane ride in the 90's and Beatrice Hotel. Hehe.

a great place to live in where history can be seen in itself...