There were only two instances when Tutubi flew via Air Philippines, the first one was the tragic Palawan trip, and the second, his recent flight to Ozamiz City, being the only carrier servicing the Manila to Ozamiz route.

Air Philippines, with carrier code 2P (Cebu Pacific has carrier code of 5J, Philippine Airlines uses PR), has daily flights to Ozamiz City, with codes 2P997 and PPS998 departing Manila at 10am, ETA Ozamiz at 11:30am. Return flights to Manila flies at 12nn and ETA at 1:30pm.

This schedule, Tutubi learned the hard way, is prone to delays and flight cancellations, like what he experienced. (A friend recommended to try flying to Cagayan de Oro but the bus going to Misamis Oriental will pass by trouble areas of Lanao del Norte particularly the towns of Kauswagan and Kolambugan going to Aurora, Zamboanga del Sur)

On September 11, an ominous date to fly, Tutubi arrived at NAIA Terminal 3 to catch his flight to Ozamiz City. It took just about an hour by taxi from Quezon City to the controversial airport terminal, his first time actually to see it. Since it was still early, he took his breakfast at Gonuts Donuts before proceeding to gate 131 for boarding.

After the usual safety instructions on boarding, the Boeing 737-300 plane taxied to the runway and already poised to fly when the captain announced there's technical problem with the airplane and thus had to return to the terminal where technicians checked the airplane if it's still airworthy. 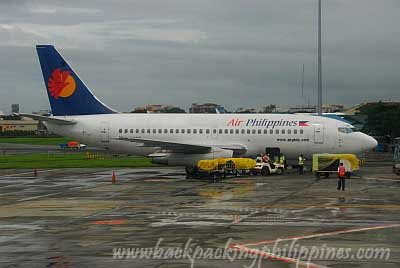 Sadly, the technicians gave it a "red light" and requested all passengers to deplane and wait for a replacement plane, a plane from Puerto Princesa, so it means someone else's flight was cancelled/delayed that day to make up for the slack. It's better this way, safe, than an actual failure during take-off, flight and landing.

When Tutubi asked his companion if flights to Ozamiz are usually delayed, his companion replied that out of fifteen times to Ozamiz, 8 were delayed and two were canceled. It seems, this route, without competition, is not well taken care of by Air Philippines. That'll be until Cebu Pacific starts to compete in November this year.

Official website: http://www.airphilippines.com
Air Philippines charges for excess baggage is now P100/kilogram.
Each passenger is allocated 10 kilos of check-in luggage.
Air Philippines flights use NAIA Terminal 3
The aircraft used is a Boeing 737-300 configured with 21 rows and 5 columns (except the exit rows)

i guess nothing beats the poor service of 5j. sigh.

freeze, oddly, i've yet to experience 5j's notorious service. that snafu that circulated thru email was brought by birth pains of the opening of NAIA Terminal 3, but still, 5J's response, or rather inaction, was appalling. it's a streak for me possibly for being lucky or else you'll read them here about my harrowing experience should there be one

i always thought that air phil is a sister airline of pal, so i would assume they have the same standards... didnt know they were that bad!

I have a question for you: How do you get a taxi out of terminal 3, can you actually get an ordinary metered one like we used to be able to in the old terminal (I think the metered taxi system there was good) or do I have no other option but the stupidly expensive airport taxi? QC pa naman ako...thanks!

gypsy, the metered taxi out of terminal 3 is just about 50 meters away from the exit gates. there's a covered walkway to the metered cab queue on Andrews Avenue. it's not hard to miss.
I discussed this on my NAIA Terminal 3 post.

at least they served you free lunch... and it was for safety reasons.

Newer have flayed Air Philippines. The closest I guess was Singapore Airlines and they use Boeing 737 too.

You have a really cool blog. Very informative about the Philippines. I just found a new travel site I thin k you might enjoy - baraaza.com. You can review destinations, upload pics and get info for your next trip.

dapat alam na nila before pa magpasakay if may sira

I guess cancellations and delays are unavoidable when it comes to flights, di ba?

RennyBA, probably not airworthy at least an accident is averted. Happens to all airlines

tin-tin, probably an error alert before the flight. it's better than an accident in midair or i won't be here to blog about it. happens to all airlines

kyels, yes, but some airlines have better record than others :P