Pampanga: The Birth of the Kamikaze (神風) (Historic Airfield)

In World History, people remember the fateful day of October 20, 1944 synonymous with the well-rehearsed and publicized landing of Gen. Douglas MacArthur on the beach of Palo, Leyte and the great Battle of Leyte Gulf, the largest naval battle in history between the Imperial Japanese Navy against the massive US fleet and some Australian vessels.

Lesser known than the much-publicized landing of the megalomaniacal general, together with the diminutive Carlos P. Romulo ,wading on the beach, was the birth of the flying human bombs, dubbed the Kamikaze, meaning divine wind in Japanese, that was very successful, at first, in hitting their targets, until the Americans found ways to neutralize them later in the war.

On a recent trip to Pampanga, Tutubi, aided by a map from Wikimapia, searched for a former airstrip constructed by the Americans during "peace time" and used by the Japanese during World War II. The old runway is now gone, nearby however is the toll gate of the newly-opened Subic-Clark-Tarlac Expressway. To commemorate the historic significance of the place, the Kamikaze Peace Shrine and Memorial was constructed on the site of the former airstrip. 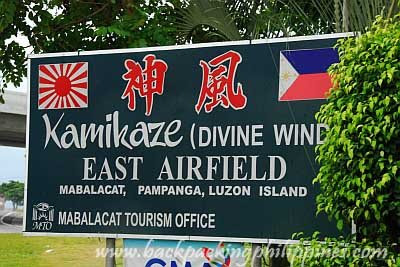 the sign at the gate of memorial shrine. there are also two huge markers ont the entrance walls, one in Japanese, the other in English, with the words in full below. 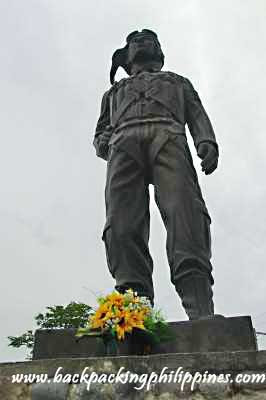 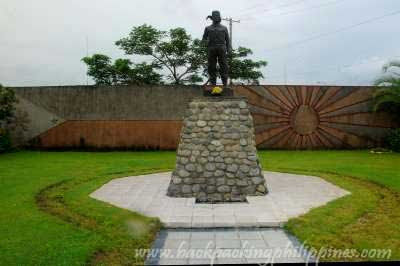 the memorial shrine with the Philippine flag and the old flag rising sun of imperian Japan. (Notice the drop of water on the lens that Tutubi didn't remove by Photoshop :P )

The entrance of the shrine is "guarded" by a torii gate, traditional Japanese gates of Shinto Shrines. After 4 "classic" shots, rain fell and Tutubi had to scamper back to his car to save his camera from getting drenched. 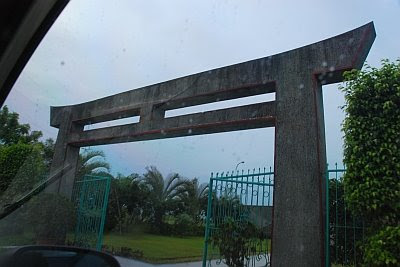 the torii gate of the shrine taken from inside the car.

Lt. Seki, the first confirmed Kamikaze pilot, before his historic suicide mission wrote: "Japan's future is bleak if it is forced to kill one of its best pilots. I am not going on this mission for the Emperor or for the Empire... I am going because I was ordered to!" He was also heard say "It is better to die, rather than to live as a coward."

Such is the spirit of the Kamikaze, death before dishonor, the way of the ancient Samurai and the Bushido Code...

For Tutubi, all he can say of the Kamikaze are these two words: NEVER AGAIN!

The Mabalacat Tourism Office (MTO) supports the establishment of the Kamikaze Peace Memorial not for the glorification of the Kamikaze but rather for the promotion of goodwill, peace, and friendship among nations. The Memorial serves as a reminder that the Kamikaze phenomenon should never happen again.

Whereas, the once dusty and serene town of Mabalacat is recorded in the annals of war in the Pacific theater during the Second World War as the birthplace of the Kamikaze phenomenon;

Whereas, the people of Mabalacat were innocent victims caught in a senseless war between foreign powers for world supremacy;

Whereas, the cause and demise of of the Kamikaze pilots is an important part of liberative struggle of the Mabalaquenos and the entire Filipino nation to unchain the fetters that bind them;

Whereas, the establishment of the Kamikaze monument which would not only serve as a cruel reminder of the horrors and senselessness of war, but is likely to boost tourism and sense of history in the area; and

Wherefore, the declaration of Clarkfield-Mabalacat, Pampanga on October 1998 as "A City of World Peace" is a continuing effort to secure lasting and enduring peace for all mankind thorughout the world, irrespective of nations and races.

Note:
There is a so-called Kamikaze Museum maintained by the Kamikaze Memorial Society of the Philippines (KAMESO), in nearby Angeles City but Tutubi has yet to visit the place. Various World War II mementos of the Kamikaze pilots of Japan and different helmets used by the Axis and Allied powers of World War II are said to be on display.

Driving Directions: From NLEX, exit at Dau, but do not cross the bridge going to Tarlac, instead drive towards the Mabalacat arch until you see the end of road leading to a public market then turn right. It's just along MacArthur Highway and a few meters after the exit gates of SCTEx.

Commute: There are buses going to Mabalacat Pampanga or Angeles City. In Mabalacat, transfer to a Capas-bound jeepney where you will pass by the shrine near the boundary of Bamban, Tarlac.

There are two other events on the 20th of October very significant to this blog. Can anyone guess what they are?

Never knew this place existed there. I like the torii gate. It's really unique.

This is way out off topic but you may want to attend this seminar. here's the link: http://naysli.blogspot.com/2008/10/calling-all-photobloggers-and-photo.html.

I was relieved to see that there was a "nota bene" in the marker. while i do envy the Japanese' sense of honor, i still do not subscribe to the concept of using ones body to kill others. or any form of killing for that matter.

Hm...great info. I will go there when I am in Phillipine...

i first learned it from here. thanks for the research.

I never like the Japanese Kamikazes.
They are too much for a suicide without really dying for something. The defeat of Japan might be the reason but not all Japanese fighters committed Suicide for the Emperor of Japan

kyels, torii gates are common in japanese shrines and parks. maybe i blog about them someday :P

nicely, i've heard about it but can't attend due to scheduling problems

r-yo, honor means a lot to them but kamikaze? hell no. the leaders who thought of this should've been the first to kill themselves in shame

ivana, so you also love history

the dong, hehe thanks

akilez, nobody liked them, don't know if the same is in japan where they don't teach their kids what really happened during the war :(

Interesting! The only place that reminds about WWII that I was able to visit is Bataan in 2006. I should go visit this place as well...

Wow, what an interesting read... and what makes it more interesting is the fact that it was planned and deviced in Pampanga no less!

Will surely try to visit this place when im back in the philippines!

I saw a National Geographic DVD about this divine wind. Kamikazes were part of the last desperate acts of the Japanese Imperial Army in the last days of WWII. They have managed to device a weapon which is considered incomprehensible to the enemy (which is the US). Kamikazes were so effective that their existence were not revealed at first to the American public. But contrary to popular belief that a kamikaze would hit no matter what, their orders are to hit the enemy ship at the best possible shot, one that could cause enough damage to sink the ship. They could call-off the mission anytime if the opportunity never arrived, that is if they were not pulverized yet by American anti-aircraft guns hehe... But I didn't know the Kamikaze's birth place was here.


You can listen to the speech by the founder in this video.