An election fraught with allegations of electoral fraud where ballots counted outnumbered voters and orchestrated by the upper class against a plebeian. Man condemned in a trial for high treason. Wife beaten and raped by his arresting officer. Rapist did not stand trial and got away with impunity. Leader executed and buried in an unmarked grave whose body up to now has never been recovered.

These are not current events, but events that happened more than a century ago to a man whose birthday the country celebrates this day: Andres Bonifacio

Born on Nov. 30, 1863, in Tondo, Manila, in present day Tutuban and part of the vast shopping mecca of Divisoria. He was named Andres since Nov. 30 is the feast day of St. Andrew the Apostle. A monument of him can be seen in front of Tutuban Mall on C.M. Recto Avenue.

When La Liga Filipina was disbanded with the exile of Jose Rizal in Dapitan, Bonifacio founded the Kataastaasang Kagalanggalangang Katipunan ng mga Anak ng Bayan (The Highest, Most Venerable Association of the Sons of the People), or the Katipunan, on July 7, 1892 together with Ladislaw Diwa and Teodoro Plata, at a house of Deodato Arellano on Sagunto Street (now Santo Cristo St) in Tondo. There's a historical marker at the site of KKK founding.

Bonifacio used the caves of Pamitinan in present day Rodriguez (Montalban) of Rizal on which he wrote: Long Live Philippine Independence

A poet and well verse in Spanish, his most famous poem's titled 'Pag-ibig sa Tinubuang Lupa'

Married twice, the first one to Monica, his neighbor in Tondo, who died of leprosy a year later.

Second marriage to Gregoria de Jesus (Oryang), an 18 year old lass from a wealthy family in Kalookan, at Binondo Church (though church records turned out nil, they could have married under assumed names for Oryang to escape parental objection being a minor at that time)

Cry of Balintawak Monument at the corner of EDSA and Bonifacio Drive in Quezon City by Napoleon Abueva in bronze. There's a plaster version in front of Vinzons Hall at the University of the Philippines in Diliman, Quezon City.

The Cry of Pugadlawin near Quezon City General Hospital (Did you ever wondered why there were at least two cries?)

Bonifacio Monument, popularly called Monumento, a national shrine with an obelisk at the heart of a rotonda (roundabout), the meeting point of EDSA, MacArthur Highway, Rizal Avenue(Avenue) and Samson Road in Caloocan City. It's sculpted by Guillermo Tolentino, a National Aritst for Visual Arts. 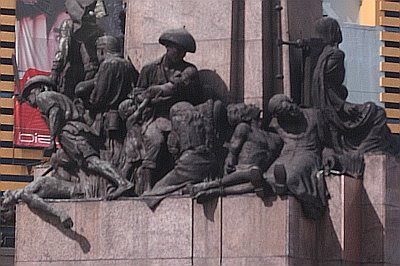 the western part of Monumento in Caloocan.

Bonifacio Monument at the Mehan Garden near Manila City Hall, a work by Eduardo Castrillo. (Ed Castrillo is also the one who sculpted the EDSA Shrine in front of Robinsons Galleria at the corner of EDSA and Ortigas Avenue, the Bantayog ng mga Bayani on Quezon Avenue, Quezon City and the upcoming Montemaria Shrine in Batangas) 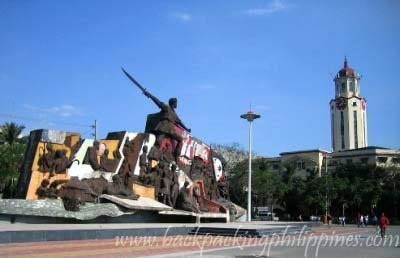 Pinaglabanan Shrine in San Juan City, the site of Andres Bonifacio's battle where he met defeat at the hands of the Spaniards

The Tejeros Convention, the site of the election that catapulted Emilio Aguinaldo as president of the Philippines. Allegations of fraud, called Acta de Tejeros, emerged the next day. The election protest was never resolved (old news, eh?)

Bonifacio was executed on May 10, 1897 on Mt. Nagpatong in Maragondon (this was previously listed in textbooks as Mt. Buntis and sometimes Mt. Hulog ). A shrine is now present at the execution site in a place now called Bonifacio Historical Shrine and Eco-tourism Park in Barangay Pinagsanhan, Maragondon.

Lastly, don't ever try to restart the old debate on Andres Bonifacio, and not Jose Rizal as Philippine National Hero.

Expect Tutubi to visit the places mentioned here in the future :P

Sources:
Ambeth Ocampo's articles on the Philippine Daily Inquirer
here, here and here.
The "rape" of Gregoria De Jesus was postulated by Ambeth Ocampo in his book Bones of Contention
National Historical Institute

there's also a bonifacio monument here in san juan to commemorate the battle of pinaglabanan. it's at the corner of pinaglabanan ave. and n. domingo st.

On your pic on Andres Bonifacio charged against Sultan Kudarat?

I am not sure why Sultan Kudarat was in Luzon, while he was actually living in Visaya and Mindanao.

Did Andres and the Sultan really engaged in a battle?

I can't recall any of my grade school Philippine history class about the Kudarat against Andres.

carlotta, oh yes, i so totally forgot about pinaglabanan in san juan even if iwas looking at it from wikimapia just the other week. will update this. thanks

Achilles, you misconstrued me, sorry, that's why there's a kidding there in parenthesis. Sultan Kudarat is a 17th century sultan of Mindanao; Bonifacio is late 20th century...as i've mentioned a monument of Sultan Kudarat is at one corner of Ayala Triangle, the other corners have Gabriela Silang and Ninoy Aquino. the area also used be Ugarte Field.. :P

Okay thanks I was thinking half way around the globe.

The National Historical Commission should consider withdrawing the National Hero status of Emilio Aguinaldo if it is proven that he cheated in the Tejeros convention and caused the poltical murder of the Bonifacio brothers.