Last week, Tutubi set out on a journey to the island of Leyte in the Eastern Visayas region, his first time to set foot on the island as well the neighboring Samar, the third largest island of the country after Luzon ang Mindanao.

The following series of posts will provide pictures, stories, World War II history, on Tacloban City, the regional gateway to Eastern Visayas and a booming metropolis soon to become a de jure highly-urbanized city, the 34th in the Philippines.

A tour of Ormoc, 17 years after the flash flood, and a crossover to nearby Samar's Basey and Marabut towns after crossing San Juanico Bridge on a rainy day. 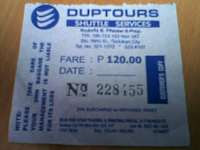 On going to Ormoc from Tacloban, Tutubi took Duptours shuttle services for a two and a half hour ride (Fare: Php120.00) that passed by the towns of Palo, Sta. Fe, Jaro, Carigara, Capoocan, Culasian among other towns on the way.

Buses, V-Hires (van for hire, GT Express) and jeepneys to other parts of Leyte and Samar are available at the New Tacloban City Bus Terminal waiting for commuters.

if only leyte would be an easier place to travel in, it would probably get a lot more tourists. land travel is a bit taxing, though i know there are lots of nice places leyte/samar could offer. have you been to ocho restaurant in tacloban? it's a must try!

whats in otso resto that travelers likes? maybe of the vetsin.. try to feel your throat after eating

anonymous, i've been to ocho and it's really over-rated...i figured i wasn't able to post it here. Ocho prohobits picture taking inside the restaurant, too bad...their CR had urine drippings uncleaned when i visited...about MSG, i don't believe it's really evil...it's one of the most researched food additives around and deemed safe for humans for decades now

Hi, this article is really helpful. If its not too much trouble, could you please post more info on DUPTOUR from TAC - OMC. Also is this a direct service? And are they available from 5am? Thanks again.