The first destination of Tutubi's DIY tour of Tacloban took him to the Leyte Provincial Capitol, an almost immaculate white neo-classical building that once served as Capitol Building of the Commonwealth of the Philippines during the period dubbed as days of liberation of World War II that began with the historic Battle of Leyte Gulf and Leyte invasion. 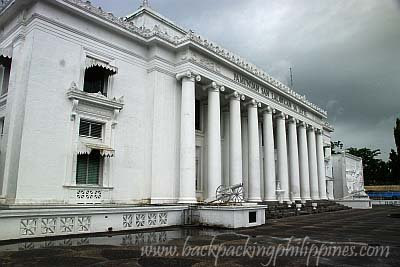 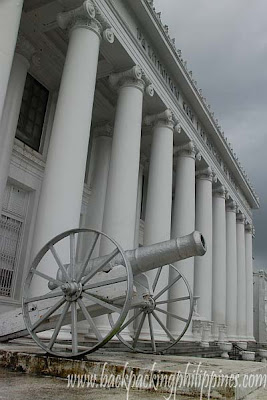 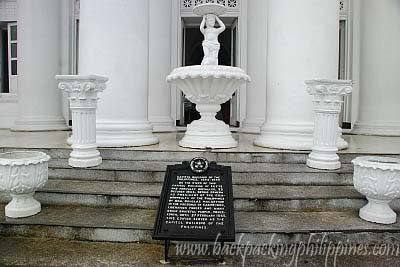 After the bloody and disastrous Battle of Manila, the seat of the national government moved to its home in Manila.

Two bas reliefs can be found on both sides of the capitol: a depiction of the "first mass" on Limasawa Island and the landing of Gen. Douglas MacArthur on Red Beach, Palo, Leyte.

Inside the capitol was an exhibit on the 64th anniversary of the Leyte landing celebration last month including photographs and memoirs other historic events in Leyte and Samar including the Balangiga massacre during the Philippine-American War.

Then Vice President Sergio Osmena, whose face you see featured on the P50 bill, was installed president of the Commonwealth due to the death of President Manuel Quezon on August 1, 1944 in New York, after a long fight against tuberculosis (a highly-cureable disease these days). He was with President Quezon on Corregidor Island and left the island for the United States to establish the Philippine government in exile. After the war, he lost the presidential elections of 1946 to Manuel Roxas (the face on the P100 bill), the first president of the new independent Republic of the Philippines. He retired in Cebu, his home province, died in 1961 and buried at Manila North Cemetery.

The site of the first mass in the Philippines and second anchorage of Ferdinand Magellan, after Homonhon, in 1521 is still disputed. It's historically recorded as Mazaua by Antonio Figafetta, Magellan's chronicler who was able to return to Spain after Magellan was killed in The Battle of Mactan against Lapu-lapu. The "official" stand of the NHI shot down arguments that Limasawa has no anchorage for large boats and disregarded the accounts of Gines de Mafra, the only person to have visited Mazaua twice, first with Magellan and the second time with the ill-fated expedition of Ruy Lopez de Villalobos, who pointed Mazaua to an island not Limasawa, but somewhere in Butuan in northern Mindanao. More of this in future posts...

i just know that the first mass was held there and the famous macarthur i shall return, but not about having the first capitol there

wow what i nice blog, i'd love to travel philippines, i think you live in a very beautiful corner of the world!
what about a link exchange between our travel blogs? just let me know, and have a nice day!

Thank you Tutubi, i've just added your blog, have a nice day!

ops sorry i left you a comment with the wrong ID :-) anyway, I'm Claudia, thank you for adding my blog, yours is just added in my blog list ;-)
bye!

The Limasawa first mass story started as an innocent error and has become a government-sponsored hoax.

To know how this error became a hoax, go to http://tech.groups.yahoo.com/group/MagellansPortMazaua/message/612