Christmas at the Malls: SM City North EDSA and Trinoma

Tutubi wrote earlier how he celebrates Christmas: stay at home; but this time, due to the arrival of his parents from the province, he had to change his annual routine and treated his parents at the mall

He arrived at SM City North EDSA shortly before 10am, the regular opening time of SM malls while his parents came with his sister around 11:30am, just in time for lunch where his parents wished to eat at Pizza Hut Bistro. 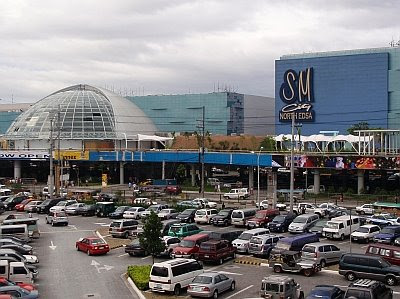 After lunch, his parents requested to watch movies shown during the Metro Manila Film Festival (MMFF), a time where only Filipino films are shown in theaters. They chose "Ang Tanging Ina Ninyong Lahat" billed by Ai-ai delas Alas. Tutubi and his sister decided not to enter the moviehouse due to so many people and opted instead to tour the newly-opened The Annex whose opening made SM City North EDSA-- the biggest in the Philippines and now the third largest mall in the world in terms of leaseable area with the Main mall building, SM The Block, SM Cyberzone and The Annex combined.

When showtime was over, Tutubi and his sister hurried back to Cinema 8 to fetch their parents and walked to the adjoining The Block, browsed through sale at Mango and acceeded to their mother's request to eat at Razon's Halo-halo for their pancit luglug. 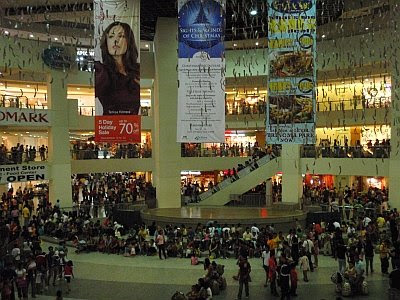 This time, they crossed the new-constructed pedestrian overpass to Trinoma and ate at Razons while Tutubi ordered sotanghon soup at Reyes Barbeque

The return walk to SM was too much already for his mother, suffering from arthritis, but managed to inch her way to SM Cyberzone carpark.

Tutubi played Santa Claus that day to his parents and made their simple wishes come true!

How to get to Trinoma Mall:

Commute to Trinoma: The fastest way to Trinoma is via the MRT where North Avenue station is linked conveniently. From Manila, you can get there by boarding jeepeneys with Project 6 signboards.

Driving to Trinoma is easy coming from Makati since it's just a north-bound drive on EDSA and located just the the last MRT station so it's hard to miss.

How to get to SM City North EDSA:

Driving to SM City North EDSA is easy coming from Makati since it's just a north-bound drive on EDSA and located just the the last MRT station so it's hard to miss after passing Trinoma.

For those taking a taxi at SM City, if there are too many people waiting for cabs, try to flag them down near the Bago-bantay tricycle terminal or at the other end of SM Cyberzone.

Eversince Trinoma opened at the so-called North Triangle, foot traffic at SM City North EDSA, one the most profitable mall of the SM Group, dropped.

Which is better, SM City North EDSA or Trinoma? It depends.

SM Cinemas vs Trinoma Movie Theaters: Tutubi just loves to watch movies at Ayala Malls (Trinoma, Glorietta and Greenbelt) due to the smaller theaters, sometimes with THX encoding, and more ergonomic seats with coasters (the same qualities he loves at Gateway Mall Cinemas in Cubao)

For pay parking, SM stands out, due to lower pricing, better design and availability of parking slots.

for groceries, Landmark department store have tad lower prices (read: a few centavos lower than same items) than SM Supermarket and Save More for the same item (except those labeled SM Bonus, of course). Tipping is not allowed at Landmark while it's ok for SM Supermarket should you request help in pushing your shopping carts to your car at the pick up point.

SM Department Store vs Trinoma's Crossings: Crossings has more upscale finds and better customer service than SM. The latter though has more items on sale. There's free gift-wrapping at both department stores.

For medicines and prescription drugs, SM only has South Star drug while Trinoma boasts of Mercury Drug...have you ever wondered why there are no Mercury Drugstores at SM malls? It's some sort of trivia :P

Trinoma has a nice garden roofdeck frequented by "park goers" and possibly the reason why SM decided to build their own rooftop garden (unfinished as of posting time).

Want to watch colorful pyrotechnics or practice fireworks photography? SM City North EDSA has them on schedule every Saturday night at 7pm while Trinoma fireworks show will commence an hour later at 8pm.

From Trinoma and MRT North Avenue Station, there are jeepneys that will take you to the University of the Philippines (UP), Project 6, Muñoz (Muñoz Market and Walter Mart Nort EDSA), West Avenue, Pag-asa, St. James, Tandang Sora, NIA, fx/vans/GTExpress to Marilao, San Fernando and other places in Bulacan and Pampanga. Tricycles are also available to take you to Veterans Village and Bago-bantay.

For a road map of SM City North EDSA and Trinoma (which means Triangle North of Makati), click here

I also spent Christmas at the mall and we also watched a movie. :) We went to Rockwell and watched "Iskul Bukol." :)

You probably live near our house as we're very near SM City and Trinoma.

toe, even if i bumped into you at sm, i won't be able to recognize your toes :P