Even with the unrelenting rain, Tutubi was urged by his friend to at least visit two more attractions in Samar before heading back to Tacloban for his 6pm flight to Manila via Cebu Pacific. They were able to at least travel for more than an hour more even with almost zero visibility by driving slowly since his guide knows the place quite well.

Basey, pronounced Basay, is a sleepy town in Samar opposite Tacloban City that has earned a place in the Guinness Book of World Records for making the longest Banig (sleeping mats). The town is home to numerous mat weavers. Sadly, no remnant of the record-breaking long mat was seen by Tutubi. The town celebrates its town fiesta with the Banig Festival in September. 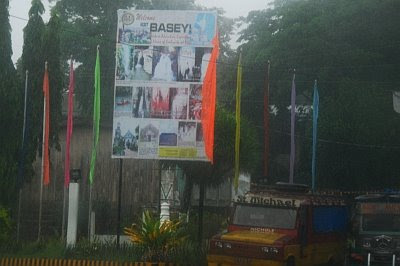 the welcome to Basey banner at the junction during a downpour

What he saw in Basey was the old Spanish church of Basey, the San Miguel Arcangel (St. Michael the Archangel Parish) with the bell tower indicating the year 1846. He wasn't able to get out of the car, again, due to heavy rain and had to take a picture of the church while inside the car and through the glass. 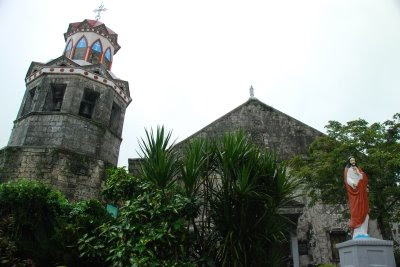 picture of the facade taken inside the car 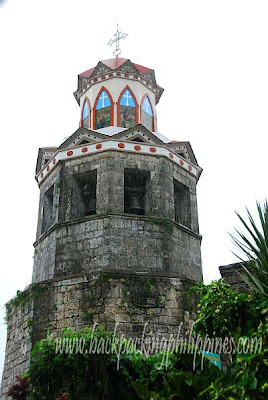 The most popular destination of Basey is the Sohoton National Park for adventurers and eco-tourism enthusiasts looking to explore caves, waterfalls and other activities. Tourism is the area is not well-developed and marketed and hampered by the lack of tourism infrastructure and not-so-good roads.

After Basey, Tutubi proceeded to the next destination town of Samar: Marabut with it's beach and gorgeous rock formations

For information, try to get in touch with Sohoton Services Association (SSA) to provide you with caving guide, kayaking guide, food as well as souvenirs and rest houses.

How to get to Basey, Samar:

Commute: From Tacloban Bus Terminal, board jeepneys or mini-buses/vans bound for Basey for less than an hour trip.
Driving Directions: Basey is less than an hour drive from Tacloban via San Juanico Bridge. Direction signs are present so you won't get lost. Drive carefully due to the presence of potholes along the way, something Samar island is "famous" for.

glad you ventured out to capture these even when the skies were not cooperating.

that's a cool belltower. the 1s i've seen aren't that colorful at all. haha

friendz, thanks for dropping by

acey, seems it's renovated, something people shouldn't do as the structure loses its original heritage value

it's a beautiful church!

Old churches are always fascinating subject to be visited...
Sayang lang kasi at umulan during your visit...

That Spanish Church looks pretty special.
Shame there were no weavers available!

hello, im from basey also, im happy that you been there in my province, its good to here also that some people like you are interesting in exploring our place...
good luck and more power.

Awesome blog! But... how can I get in touch with the Sohoton Services Association? Thanks!